Kestell – The farming community between Harrismith and Kestell are facing massive challenges in accessing safe water and is forced to get it from a nearby stream which is not safe for drinking.

Kestell – The farming community between Harrismith and Kestell are facing massive challenges in accessing safe water and is forced to get it from a nearby stream which is not safe for drinking.

Community leader Thabo Motaung says the community is being “taken for a ride” with many government people visiting them, but they “leave empty promises”.

He says the community has lost faith in the local councillor Lesole Mokoena who only comes to see them when elections are looming.

When asked why the community did not approach the local municipality for assistance with water tanks Motaung claimed that “the councillor told us that he is not a councillor for farm people”.

“We do not know now who can help us, the councillor doesn’t even want to see me,” says Motaung.

Motaung said that when the stream runs dry they resort to digging wells and we sometimes receive water from a tennant in the farm house.

Motaung also expressed concern that in their search for water on neighbouring farms, the elderly had to cross the busy N5 motorway.

“Just have a look at these elderly women, how frail they are, to travel such a distance to get water? What if they are hit by the cars?” said asks Motaung.

A municipal worker at the Maluti-a-Pfofung office, who declined to give his name, said that issues of water supply was the sole responsibility of the Mokoena.

“We had direct communication with the people in Geduld, and we made sure that we would send people to deliver a weekly supply of water. However, the issue of water supply on farms recently became the sole responsibility of the councillor.

He referred all questions to the councillor, adding that “he has changed everything in terms of how the municipality operates and deals with marginalised group and we understand that is causing much confusion among the people from the farms”.

After several efforts OurHealth eventually managed to get hold of Mokoena, who reluctantly agreed to answer some questions.

“It is not true that I am not helping the community at all. I always go to that particular farm to assess the needs of the community,” he claimed.

Asked when water will be supplied to the Geduld community, Mokoena responded: “I have told the community that the issue of water has been tabled in the municipal council in Qwaqwa, where the headquarters are. The council will communicate their decision and I will inform the community of the outcome. People will know when the decision has been taken.”

Mokoena ended the interview and refused to answer any further questions.

The Public Service Accountability Monitor (PSAM) at Rhodes Univeristy has released an analysis of national and provincial efforts to improve access to housing, focusing on the Eastern Cape.

LIMPOPO – Lesedi Clinic in Lephapane, outside Tzaneen in the Mopani District has gone without water for four months after the water supply was found to be infested with bacteria. Mogale Mojela reports that the water has been switched off altogether. 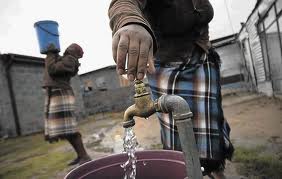 LIMPOPO – The death of a young boy from rural Vhembe who drowned in a river after deciding to swim in order to cool down as sparked official warnings from the Limpopo Department of Health, urging people not to swim in local rivers.