Smoking and drinking often go hand in hand, but this combination may wreak havoc on a person’s mental health, according to a new study, published in the British Journal of Psychiatry. 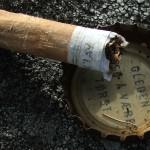 Researchers from University College London found combined smoking and heavy drinking was associated with a 36 percent faster decline in brain function, and the problem accelerates as the amount of alcohol consumed increases.

“Current advice is that smokers should stop or cut down, and people should avoid heavy alcohol drinking,” the study’s lead researcher, Dr Gareth Hagger-Johnson, said in a news release. “Our study suggests that people should also be advised not to combine these two unhealthy behaviours – particularly from midlife onwards.”

For the 10-year study, 6 500 participants (aged 45 to 69) were asked about their smoking habits as well as the amount of alcohol they consumed. Their brain function – including verbal and math reasoning, verbal fluency as well as their short-term verbal memory – was also assessed three times over the course of the study.

The effect of combined heavy drinking and smoking over the 10-year study period was the equivalent of 12 years’ normal decline – two years more than the duration of the study.

“When we looked at people who were heavy-drinking smokers, we found that for every 10 years that they aged, their brains aged the equivalent of 12 years,” Hagger-Johnson explained. “From a public health perspective, the increasing burden associated with cognitive ageing could be reduced if lifestyle factors can be modified, and we believe that people should not drink alcohol more heavily in the belief that alcohol is a protective factor against cognitive decline.”