Mutshidzi Nembahe tested HIV-positive at just 14 years old. His courage to live openly with HIV has left those in the community in awe.

Young man’s openness about HIV makes him a village hero 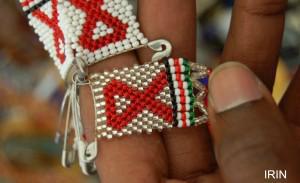 Nembahe believes he contracted the virus through unprotected sex. While he says he was too young to understand his diagnosis at first, good support and advice made the news easier to handle.

“I am very grateful that I had people around me to give me support and advice on how to move on with my life after testing positive,” says Nembahe, who is now 21 years old.

At first, Nembahe never wanted people to know his status. Through the support and counselling of his parents, nurses and friends, he mastered the courage to be open.

“I find it very easy to talk about my status with everyone now,” he adds.

Carolline Xihundla is a sister in charge at Matavhela Clinic, which Nembahe regularly attends. She says she never expected a young person like Nembahe to disclose his status.

“I was really surprised when he came and told me that he was HIV-positive,” she tells OurHealth. “He has a lot of courage and it will make him strong when it comes to taking his antiretroviral treatment.”

Nembahe’s mother, Joyce, says she is proud of her son.

“I give him all the support he needs and I’m grateful that he has accepted his condition and is taking his treatment everyday,” she says.  “He’s an example to other young people.”

He frequently talks to young people in his village of Gundani, about 250 kms outside Polokwane, about the ways people can contract HIV – and how important it is to use condoms.

“I never even for a day thought of letting go of my friendship with him,” Kekhumbe  says. “I still see him as a normal person, so I don’t get why I should leave him now after spending our childhood together.”

“I love him for his honesty,” Kekhumbe adds.