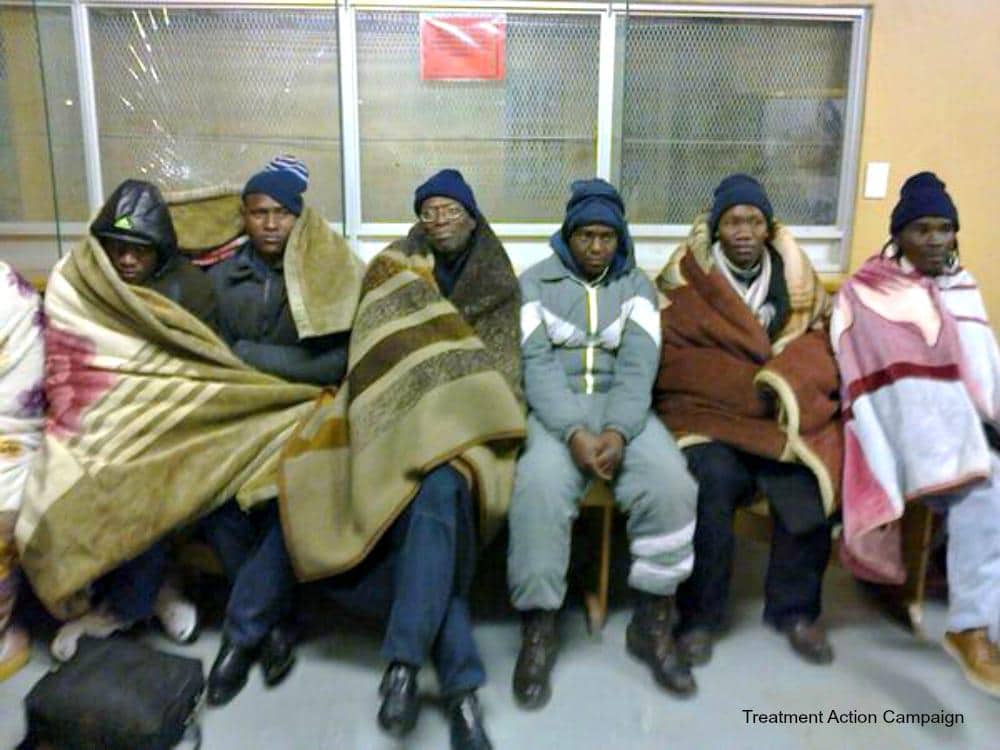 More than 100 activists, community health workers were arrested and charged following a 2014 protest.

Another 50 Treatment Action Campaign (TAC) members have been arrested following a second wave of protest over what the TAC alleges is a “health crisis” in the Free State. 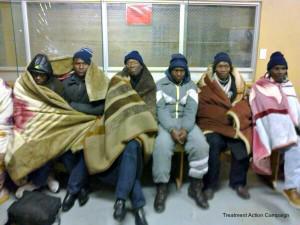 Many of the arrested protestors are without chronic medication to treat illnesses like HIV, diabetes and hypertension.

The arrests occurred yesterday after TAC members protested for the second time in 24 hours in front of the Free State Department of Health. Those arrested join more than 100 TAC members and laid off community health workers arrested in the early hours of yesterday morning after what TAC said was a peaceful night vigil at the department’s Bloemfontein headquarters.

The vigil was the second in as many weeks protesting what the TAC and public interest group Section27 have described as a “health crisis” in the province, which has been marked by stock outs of essential medicines, the rationing of medical services and Free State MEC for Health Benny Malakoane’s alleged dismissal of about 3,000 community health workers.

“We will not retreat,” says TAC

According to TAC Free State Chairperson Sello Mokhalipi, protestors had been chanting peacefully for about five hours before police arrived at the Department of Health’s Bophelo House headquarters on Wednesday night.

Police responded by arresting first male then female protestors. TAC member Machobane Morake says he was put into a police van and then allegedly dragged out again by a Parks Road operational commander who Morake says then assaulted him before fellow TAC members intervened.

“He hit me in the face with a fist two times,” Morake said.

Park Road Police Station Captain Chaka Marope said he was not aware of the alleged assault but that the station would follow up on the allegations. He added that anyone who feels that they have been assaulted by a police officer should feel free to open a case.

Mokhalipi also alleges that the order to arrest protestors came from Malakoane and Free Sate Head of Department David Motau.

Provincial health department spokesman Mondli Mvambi could not be reached for comment despite repeated attempts yesterday.

[quote float=”right”]”Many middle-aged and elderly women who have served the health service for years, spent the entire Thursday in holding cells”

The additional 50 TAC members  arrested yesterday afternoon joined those already in custody at six police stations in Bloemfontein and as far away as about 160 kms away in Welkom.

Many TAC members are also living with HIV and most did not have their daily HIV treatment with them when they were arrested, Morake added.

As of yesterday afternoon, TAC National Campaign Manager Fredalene Booysen and a team were attempting to reach all six police stations to ascertain which protestors needed to receive antiretrovirals or other medicine, and had begun contacting the family members of those arrested.

“Obviously, at this point the police aren’t going around asking (if people need medication),” she said. “I think their core focus has been to get everyone into a cell.”

For the children of recently unemployed HIV testing counsellor and single mother Selina Hlabahlaba, it will be another cold night without their mother. Hlabahlaba said she adores her work but lost the family’s only income of R1500 when Malakoane allegedly cancelled her contract.

With temperatures early Thursday dipping to -3 degrees, Hlabahlaba spent the early hours of yesterday morning huddled with other protestors in a Park Road Police Station hallway as they waited to be accommodated into cells. Hours after being arrested, protestors at the station were continuing to chant.

Elderly among those being held

[quote float=”right”]“They are hungry, cold and in need of critical medication for various conditions such as HIV, TB, diabetes and hypertension”

Conditions in crowded cells may be worse, according to Booysen.

“It’s so cold and they are given on very thin blanket,” she said. “On top of that, the food being given out is not good.”

The TAC also pointed out that a number of elderly people are among those being held.

“Those arrested, including many middle-aged and elderly women who have served the health service for years, spent the entire Thursday in holding cells at various Bloemfontein police stations,” said the TAC in a statement. “They are hungry, cold and in need of critical medication for various conditions such as HIV, TB, diabetes and hypertension.”

Arrested protestors are expected to appear today before the Bloemfontein Magistrate Court today on charges of participating in illegal gatherings. They are also expected to apply for bail.

The TAC is calling for charges against the protestors to be dropped, a call that has been backed by almost 20 organisations including Amnesty International, the Democratic Nursing Organisation of South Africa and the Congress of South African Trade Unions.

Following initial arrests, the TAC phoned African National Congress (ANC) General Secretary Gwede Mantashe in hopes that Mantashe could intervene to remedy the alleged collapse of health services in the Free State. According to a TAC statement released yesterday, Mantashe indicated it was not his responsibility to deal with ANC provincial leadership.