In Soshanguve, reports of deaths and botched traditional circumcisions are leading some boys to opt for medical male circumcisions instead.

On 16 July, the South African Press Association reported that botched traditional had killed at least 35 boys and sent another 180 to the hospital in the Eastern Cape. Reports like that have made 20-year-old Ronnie Mothusi from Soshanguve outside Pretoria think twice about following the age-old custom.

He opted to be circumcised at Soshanguve’s KT. Motubatse Clinic, where the Department of Health has partners with the Centre for HIV and Aids Prevention Studies (CHAPS) to provide medical male circumcision (MMC).

“Because of negative reports I heard of people being beaten and some dying, this for me has to be a perfect choice in reducing chances of been infected by HIV and to save my life from the hands of botched traditional doctors in the bush,” Mothusi told OurHealth.

Male circumcision has become a recommended HIV-prevention strategy since three clinical trials, one of which was also held in Orange Farm, showed that MMC could reduce men’s HIV by as much as 60 percent.

Media reports of death, amputations may be driving demand

In June 2014 alone, 914 young men were circumcised at the clinic, according to clinic manager Isaac Moremi, who added that the clinic continues to see up to 120 men daily for the procedure.  He thinks that fear about what can go wrong during traditional initiations is a factor.

“We do not force anyone into the practice but people come in numbers to be circumcised,” Moremi said.  “I think the reason for such high turnouts is because of the excellent job we do compared to (media reports) about deaths that arise through traditional male circumcisions in the country.”

[quote float=”right”]”At this rate, (the practice) is going to die of natural causes because…people are scared of taking their kids to initiation schools”

In late June, the Commission for the Promotion and Protection of the Rights of Cultural, Religious and Linguistic Communities (CRL) released a report claiming that more than half a million boys have been hospitalised due to botched traditional circumcisions since 2008,

According to CRL Chairperson Thoko Mkhwanazi-Xaluva, unsafe and illegal schools will be the death of the tradition if measures are not taken to keep traditional initiates safe.

“We cannot have mothers lose their boys up there and be told only when the other boys come back,” Mkhwanazi-Xaluva told Health-e News at the report’s launch. “At this rate, (the practice) is going to die of natural causes because…people are scared of taking their kids to initiation schools.”

Moremi says that since the clinic began offering MMC in 2012, there have been no serious adverse events reported.

“However, we cannot say that we do not have challenges,” he added. There are shortages of human resources and space to house all these people when they await to be circumcised during cold winter times.”

Men who opt for MMC receive counselling before and after the procedure, including careful instructions on how to take care of wounds. Men are advised to forgo sex for six weeks following the to allow the wound to heal.

But Moremi and nurses report that some men fail to follow instructions.

“We also have people who do not obey our prescribed condition who apply ointment on their wounds after been circumcised and that causes the wounds not to heal properly,” he said.  – Health-e News Service.

Three years after a young man was abducted and killed at an initiation school, some schools are working with Western doctor to safeguard initiates’ health.

With government still far off its goal to medically circumcise 4.3 million by 2016, Department of Health officials say they plan to begin promoting medical male circumcision (MMC) among infants and young boys.

It’s lunchtime in the Mnyameni household, but there is no sign of a meal. ‘I’m hungry,’ complains three-year-old Maria squirming next to her mother, Malta Mnyameni. 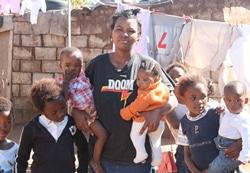