Amid ongoing power cuts, many communities are dealing with intermittent water supplies and relying on water trucks for portable water as municipalities struggle to maintain their water systems. 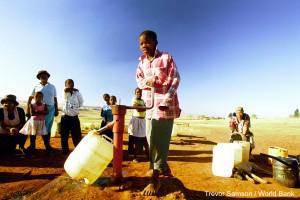 Last year, over a quarter of households had water disruptions lasting longer than two days, according to StatsSA.

A Health-e News investigation found that communities in at least three municipalities in Gauteng, the North West and Limpopo rely on truck deliveries of water to survive. Worst affected are informal settlements and rural villages, some of whom have been dependent on erratic supply from trucks for years.

In other areas in the Free State and Eastern Cape, where trucks are not available, residents are literally left begging for water.

Last year, over a quarter of households had water disruptions lasting longer than two days, according to StatsSA. That figure is likely to be worse this year, with even Johannesburg residents going without water recently.

Yet water expert Dr Marius Claassen says there isn’t a national water shortage yet, except in some KwaZulu-Natal areas.

“We have enough water in the country to meet the current and medium-term water needs. The challenge lies in the infrastructure required to treat the water and move it from the bulk supplies to end users,” said Claassen, head of water resources research at the Council for Scientific and Industrial Research.

South Africa loses about 40 percent of its drinking water thanks to broken pipes, according to the Department of Water Affairs’ 2013 annual report. Many municipalities are also struggling to purify drinking water – particularly as much of the water supply is contaminated by sewerage.

“We have been struggling with water for some few years (and) depend on trucks that sometimes do not come,” said resident July Nayo.[quote float=”right”]”The trucks deliver us dirty water from the nearest river. They don’t even bother to clean the water first because they know that they are not the ones who are going to use it”

Local Winterveld Ward Councillor Sophie Sithole blamed the water crisis on faulty connections and said the matter had been reported to Rand Water but could not confirm when water would be restored to affected areas.

Limpopo’s Helula and Tshikondeni villages in Mutale Local Municipality also depend entirely on water trucks that allegedly deliver dirty water, according to residents.

“The trucks deliver us dirty water from the nearest river,” alleged Ntshandukeleni Nembodi. “They don’t even bother to clean the water first because they know that they are not the ones who are going to use it.”

Tshikondi residents have been waiting more than five years for communal taps. Meanwhile, the few taps in Helula are aging.

“The taps are only few and old around the village and there is no water coming out of them,” Aifheli Tshishonge told Health-e News. “They are only here to decorate the streets of our village while we get dirty water from the river.”

Mutale Ward Councillor Sylvia Thambatshira said she had not heard complaints of dirty water but that both villages were on a list of communities slated for taps by the end of this year.

Communities forced to beg for water

Meanwhile, in Rooikop, a rural community south of Standerton in Mpumalanga, residents say they have to beg for water at a school 60km away but security guards often chase them away.

Phumlaphi Mkhabela says there are no taps and the community, in the Gert Sibande District Municipality, relies on streams or the school. During the rainy season, households collect rainwater in buckets.

“When it’s not raining and (ponds) become dry, and we have to hire transport to fetch water from places like Ezakheni Combined Boarding School and Driefontein,” said Mkhabela. “We spend almost R400 to hire transport (and that) is too much for us.”

Idah Mbuyisa has been living in Rooikop for over 30 years and says the community has never had piped water.

The long wait for water

Meanwhile, rural households in Vezinyawo, Mpumalanga allege they were forced to pay R2 each to keep a municipal water pump working after the municipality would not pay R200 for prepaid electricity to keep the pump running.

The small community went without water for a week in October, and no water trucks were sent to relieve them.

Nomvula Ngwenya, who recently gave birth, had to move back to her family home rather than risk her baby’s health.

Sphiwe Dlamini didn’t have the option of moving: “We didn’t have any choice other than to use stream water. We shared the water with animals, even when it smelled of cow dung.”

Local Ward Councillor Eric Phakathi denied that households had been asked to keep the pump running.[quote float=”right”]“We normally wait in queues, but some of us just (relieve) ourselves on the ground,”

Meanwhile, the delay in the construction of a dam near Kestell in the Free State is jeopardising the health and livelihood of local people. The damn was supposed to be finished by September and residents of Thlolong township east of Bethlehem depend on irregular deliveries from water trucks.

As food gardens in Thlolong whither, Phofung Local Municipality spokesperson Basie Ongara did not respond to questions about when the dam would be completed.

Meanwhile, an estimated 1 800 people in Silahliwe informal settlement outside Bethlehem and share just eight water taps and five toilets, only two of which are working. Long, snaking queues for taps and toilets lead residents to desperate measures.

“We normally wait in queues, but some of us just (relieve) ourselves on the ground because we cannot wait for that long just to use the toilet,” said Motlalepula Mahlangu.

Water problems stretch to the Eastern Cape where in October, Lusikisiki and surrounding areas had no clean water for two weeks.

Makhwalo Mandela’s two granddaughters from the affected Katilumle informal settlement were treated for diarrhoea at St Elizabeth Hospital. She blamed this on unclean water from local springs.

“The water from the spring is not clean,” Mndela told Health-e News. “Animals like cows and pigs are drinking at the spring so we are sharing the water.”

The hospital itself suffered a water shortage and management requested water trucks to deliver additional water.

According to the latest District Health Barometer report, more children admitted to hospital with diarrhoea die in the Eastern Cape than anywhere else. The province’s OR Tambo, Chris Hani, Alfred Nzo and Amathole districts recorded the highest number of child deaths due to diarrhoea, according to the Health Systems Trust report. – Health-e News.