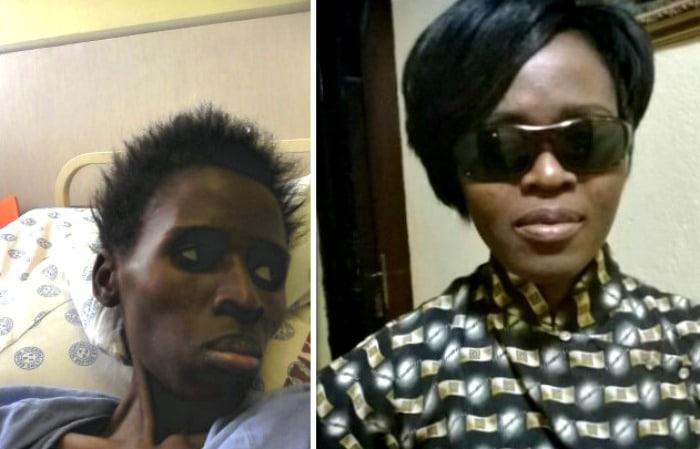 Nkosi took these before and after pictures as part of a photo collage she made entitled, "Freedom" (Pictures supplied)

Doris Nkosi, 35, says she spent years digging her own grave by smoking and neglecting her health until the words of her 5-year-old son changed all that. 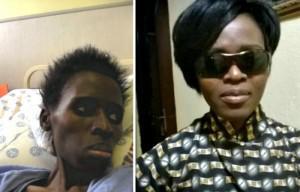 Nkosi took these before and after pictures as part of a photo collage she made entitled, “Freedom” (Pictures supplied)

From Nelspruit, Nkosi says she spent almost two decades smoking and was adamant that her life decisions were no one’s business but her own.

Then in 2014, Nkosi was hospitalised with lung disease. She says it was a turning point.

“I remember the day my 5-year-old visited me while I was in hospital,” she remembers. “He took one look at me and ran.”

“My mother ran behind him and said, ‘don’t be afraid, it’s your mother,” she adds. “What came out of his mouth was not what I expected to hear. He just said to my mother, ‘no, that’s not my mother, she’s a ghost.’”

“That day I was (became) motivated to get better, leave the hospital and start searching for my destiny,” Nkosi tells OurHealth.

The damage to Nkosi’s lungs is irreparable, and she continues to struggle with walking or speaking. However she has quit smoking and is also managing her HIV better, she adds.

“Throughout 2014 I was battling with a CD4 count of three,” says Nkosi, describing her CD4 count, which is used as a measure the immune system’s strength. “I have been trying by all means to be healthy again so that my CD4 count will be high and viral load low.”

Viral load testing measures the amount of HIV in a person’s blood and is the best way for health workers to see if patients are responding to ARV treatment or if they have developed resistance and need to be changed to other ARVs.[quote float= right]”In this process of getting better, I have lost my boyfriend because he wanted a child and I didn’t. Gone lover and welcome life”

The less HIV in a person’s blood, the less likely they are to pass the virus onto others.

‘My mom pushed me to see what she saw in me’

Nkosi reports that her CD4 count has now climbed above 30 and credits her new, healthy lifestyle and finally accepting her HIV status with the improvement. She credits her family’s support, particularly that from her mother, with the change of attitude.

“Knowing my HIV status never made me to commit to my health even a little bit because I wasn’t ready to do so,” she adds.

“My mom pushed me to see what she saw in me (in myself) and I will forever be grateful,” Nkosi tells OurHealth. “Immediately after I was released from hospital, I was determine to adhere to my ARVs. My family’s support is the reason don’t want to default.”

Given her low CD4 count and high viral load, Nkosi said she also decided to forgo having a child with her partner until she was healthier. This decision may have cost her the relationship, but she says it was for the best.

“In this process of getting better, I have lost my boyfriend because he wanted a child and I didn’t,” she said. “Gone lover and welcome life.”

A skilled bead worker, Nkosi says she now plans to start a beading and support group for community members affected by HIV. She says she hopes the group will provide people living with HIV a place to share their problems and find people to help support them in adhering to life-long treatment while learning a new skill.