New research has shown that fiery Health Minister Dr. Aaron Motsoaledi may have been just what the doctor ordered for South Africans’ health. 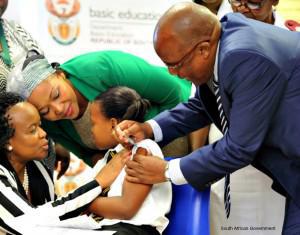 Under Motsoaledi’s leadership, South Africa became the first country in Africa to adopt the conjugate pneumococcal vaccine in an effort to stem deaths in young children. The country also adopted the human papillomavirus vaccine for young girls, seen here.

As Motsoaledi took the reigns of the National Health Department in 2009, University of Cape Town’s Head of the Department of Medicine Bongani Mayosi was researching the state of health and health care in South Africa. Mayosi conducted the same research in 2014 – five years into Motsoaledi’s tenure.

According to Mayosi, his research has revealed very real and tangible gains for the country in life expectancy and in tackling major disease drivers under Motsoaledi’s leadership.

“Our research showed that there were significant changes that could be measured,” said Mayosi, who recently presented the research at Discovery Health’s Discovery Health Summit. “If you look at the number of people receiving antiretroviral treatment (ART) in 2014 the number was 10 times higher than in 2006.”

He also notes that South African have gained an average of six years in life expectancy between 2005 and 2012.

Previous studies have attributed gains in life expectancy to the widespread introduction of ART in South Africa.

Mayosi argued that there have also been considerable gains in addressing the country’s major epidemics of HIV, tuberculosis, violence and injury, non-communicable diseases, and maternal and child deaths.

But recent research by the Cape Town professor also found that at least 10 million South Africans live on less than one US dollar per day or about R12. This is below the so-called food poverty line below which people are unable to purchase enough food for an adequate diet.

“There are clearly some challenges remaining, in particular problems that persist with respect to poverty and racial disparities,” said Mayosi, who also praised Motsoaledi’s work in introducing the National Health Insurance to provide for more euitable access to health services. He also urged Motsoaledi to fast track the project currently being piloted in select districts nationwide.

Mayosi also said there was a need to increase the number of doctors produced in the country.

“Human resources for health remains a major hurdle,” he told Health-e News. “Since 2000, the numbers of doctors we produce every year has only increased by about eight percent while the population has nearly doubled in the same period.” – Health-e News.

Edited versions of this story was also published in The Pretoria News and The Mercury newspapers.