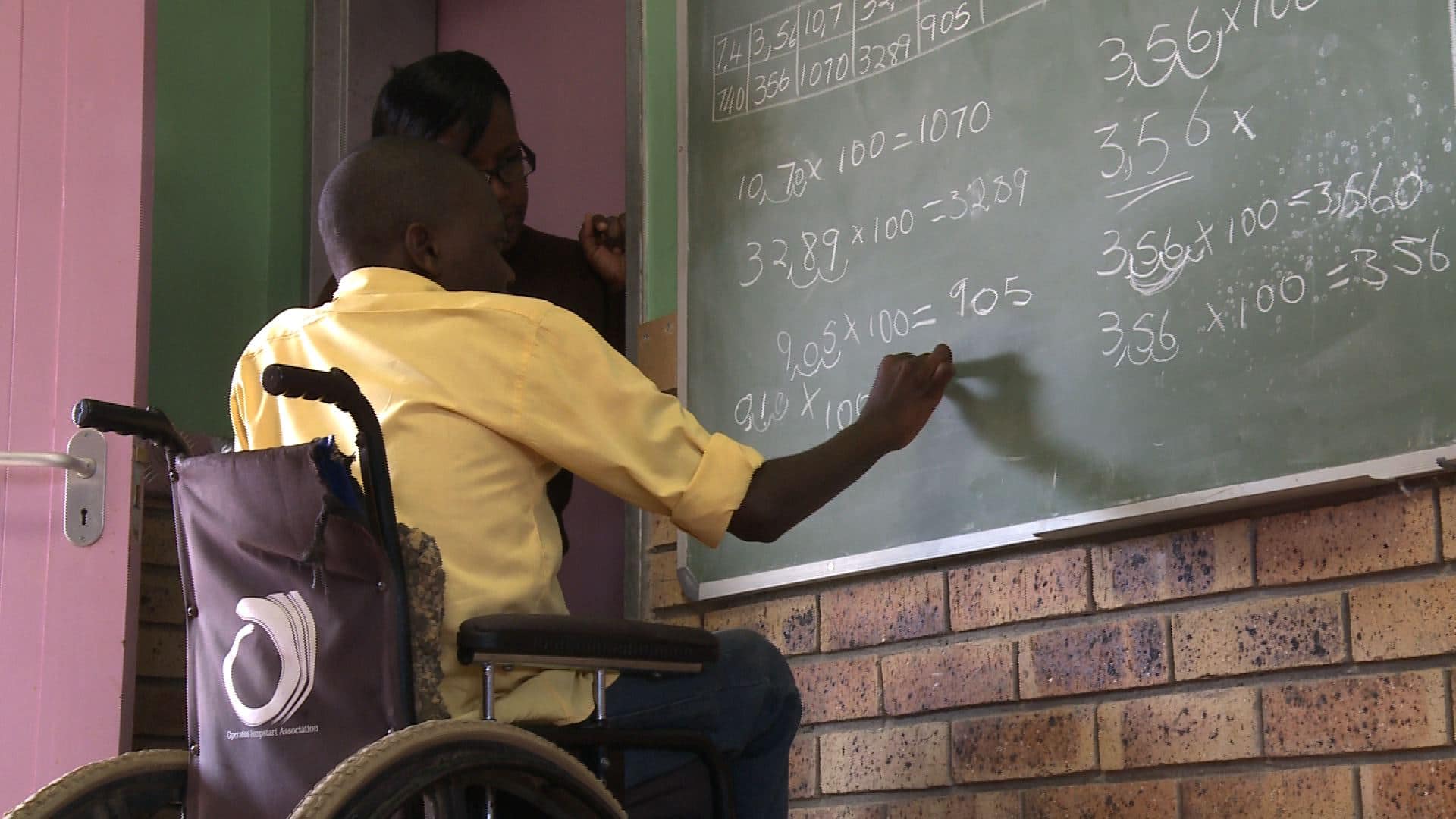 Imagine being 22 years old and still stuck in primary school simply because no local high school can accommodate your physical disability. This is the fate of Makhosi Ndabambi. More than 500,000 disabled South African children have no access to any schooling, because schools are only built for the abled.

Apartheid of the abled

Makhosi Ndabambi watches helplessly as her classmates perform their daily ritual, methodically stacking chairs and desks, and dragging out and arranging the mattresses they’ll be sleeping on later. Her best friend picks her up from her wheelchair and helps her into bed. 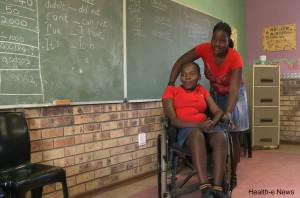 Makhosi Ndabambi is helped by her friend in class

At Sisizakela Special School for children with disabilities, a primary school in rural KwaZulu-Natal, classrooms double up as bedrooms at night. The children who attend the school suffer from a diverse range of disabilities, including autism, Down’s syndrome and cerebral palsy.

Makhosi has a degenerative condition that has left her wheelchair bound. While her arms may be too weak to push herself in her wheelchair, her mind is completely unaffected by the condition. Yet at the age of 22, she is still trapped in primary school because no nearby high school can accommodate her disability.

With nowhere else to go, Makhosi repeats Grade 7 year after year. But she says she’d rather do that than be stuck at home doing nothing: “It makes me angry and it makes me want to cry because I want to finish school. I want to matriculate and have that certificate because without that what will I be able to do?”

“My mother didn’t go to school and she struggles to support us,” adds Makhosi, who believes accessing education will help her family to break the cycle of poverty.

The tragic reality is that Makhosi may be one of the lucky ones. More than half-a-million disabled children of school-going age in South Africa cannot access any form of education, according to a Human Rights Watch (HRW) report released last week.

A need for inclusive education

“We can’t disadvantage a child when the fault has not been her family’s fault. It has been the system that has not been appropriately responsive to her needs. We just can’t turn our backs and walk away,” Department of Basic Education director of inclusive education Dr Moses Simelane says of Makhosi’s case.

The KwaZulu-Natal education department admits that there are no special needs high schools in her district but says she should enroll in any wheelchair friendly high school in the area. According to her principal, this is impossible as there aren’t any.

Wheelchair ramps aside, Makhosi needs constant assistance to move between classes and go to the bathroom. Inclusive education requires more than just ramps and accessible bathrooms. It means creating an environment in which the needs of disabled children are catered for.

“The right to education can’t be over-emphasised. It’s not only a human right but an indispensable empowering means of realising other human rights”, Daniel Bekele, executive director HRW’s Africa division, said at the launch of the report.

Enshrined in our Constitution and protected by a plethora of international treaties, the universal right to education is an immediate right. One day all South Africans should have housing. Right now, all children should go to school. Yet the parents of children with disabilities are often turned away from schools or told to apply elsewhere. The question our schools should be asking is not “Where do we send these children?” but rather “How do we accommodate them?”

In 2001, national policy set out a 20-year plan towards creating an inclusive education system, but 14 years on little progress has been made.

Many barriers to education

It took Phumzile Vilikazi eight years to get her son, Mxolisi, into a school for children with autism in Johannesburg.

“I felt so helpless as a mother, not being able to provide my child with something as simple as an education”, she says.

Now that Mxolisi is in school, the challenges are far from over. Vilikazi has to make the six-hour return journey to and from school with him every day on stuffy trains and crowded taxis.

While everyone experiences autism differently, Mxolisi has a hard time with crowds and the commute is upsetting for him. For Vilikazi, it is littered with stares and condemnation from strangers who don’t understand her son’s condition.

The knock-on effects of disabled children not being able to access schools are endless. With no one to look after Mxolisi, Vilikazi was unable to hold down a job for the eight years she struggled to get her son into school. Now that Mxolisi is attending school, she is able to financially support their family. She has also seen huge improvements in his behaviour and skills development.

I feel so empowered, getting him into school and having a job have changed my life”

The barriers to accessing education for children with disabilities are endless, but many experts argue that one of the main problems is that young people like Makhosi and Mxolisi have to fight for places in “special schools”. Some of these schools have waiting lists stretching into the thousands or are located too far away. The notion of special schools creates parallel education systems that perpetuate inequalities.

“As we speak, schools are being built in this country that have stairs where classrooms on the first floor or the second floor won’t be able to be accessed by children who have physical impairments,” says Stellenbosch University clinical psychologist Dr Brian Watermeyer, who has endured his own education challenges due to being visually impaired. “What that means is we are building for ourselves a legacy of exclusion which is going to continue for decades and decades to come.”

“The story of disability is a story of segregation,” he adds. “We know particularly as South Africans, for all the wrong reasons, that what segregation does is deepens prejudice”.

Bringing children living with disabilities into “mainstream” schools can benefit both them and their peers, according to HRW’s Elin Martinez, who argues that it allows children to learn from each other via a shared curriculum. Children can learn from a young age to interact together as people with differences.

Jean Elphick works for Afrika Tikkun, a developmental organisation that helps to provide education, health and social services to children and families in South African townships. She argues that education is the first step in allowing South Africans like Makhosi to claim their socio-economic rights.

“Access to your socio-economic rights and (the ability) to be able to one day support yourself is dramatically decreased when you do not have any education,” says Elphick. “The ongoing inequalities experienced by people with disabilities is in many cases related to the lack of access to education.”

Despite incentives for employers to hire people with disabilities and opportunities for learnerships, she has been unable to put many of the young people she works with forward for these kinds of placements because they have not completed Grade 10.

In 2011, only about 1,000 disabled children in the entire country sat the matric examinations. According to HRW, increasing this number will mean not only creating a unified schooling system for all of the country’s children but also increased access to braille and sign language resources and better-trained teachers.

Despite being stuck in repeat in Grade Seven, Makhosi’s most fervent dream is to matriculate: “It will be my happiest day ever in life, opening the newspaper and seeing my name ‘Makhosi Ndabambi.’ Wow.”- Health-e News

An edited version of this story was published in the Daily Maverick.