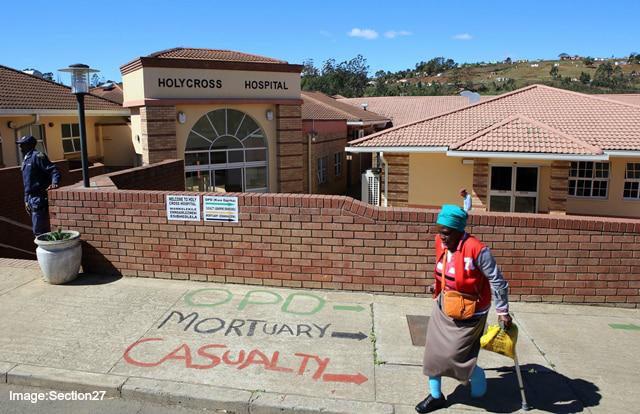 Medicine stock outs and staff shortages are just some of the reasons Holy Cross Hospital staff say patients may be dying unnecessarily at the beleaguered Eastern Cape hospital, writes Ntsiki Mpulo for the NSP Review.

An September 2013 special NSP Review Report Death and Dying detailed the sad death of a toddler who died in the hospital. The attending doctor told a story of failure at several stages including lack of oxygen and access to emergency services.

While there are signs of improvement, the hospital is by no means out of the woods. The hospital situated 20 km outside Flagstaff in the Eastern Cape is battling various challenges. An NSP Review visit in August revealed  a lack of access to running water – devastating for a hospital.

The latest water shortage has lasted one week but according to the hospital’s Dr James Whitehead, the longest period the hospital has been without water is six weeks.

Hospital staff rely on the meagre supply of 20 000 liters in tanks provided by the municipality, which also supply the community. With this limited supply, hospital staff must ensure that patients receive medication and are fed, and that bed linen is washed.

A member of the cleaning staff complains that detergents and other cleaning chemicals have not been ordered putting patients at greater risk. “At times we wipe the floors and surfaces with only water,” he explains, “But now while there is no water, we use nothing.”

The water crisis at Holy Cross Hospital predates a visit in 2013 by the Eastern Cape Health Crisis Action Coalition. It is only one of a litany of issues identified by the Office of the Health Standards Compliance (OHSC) as critical to the turnaround of the hospital, which, it found, was on the brink of total failure.

[quote float = right]Unfortunately it is only when children or pregnant women die that things happen, but patients on all the wards are at risk”

Built in 1923 by missionaries, the hospital has been the centre of the community for nearly century but according to staff, it continually fails the people of Flagstaff. A tour of the hospital premises portrays a polished image: the teaching facility is pristine, new desks and computer equipment gleam – the result of a building upgrade completed in 2007. But, beneath the facade lurks the reality that led to the hospital receiving only a 43 percent grade from the OHSC in October 2014. The OHSC cited critical issues in the areas of infrastructure, human resources, equipment, medication, food preparation, and tuberculosis (TB) and emergency medical services.

The hospital’s staff members are keen to demonstrate that they have made significant strides in snatching the hospital from the precipice. The management acknowledge that there are areas that are not up to standard, including appalling staff accommodation. They say they are trying to minimise the impact of gaps.

According to a hospital board, the accommodation situation is at a crisis level with frequent sewerage blockages that are exacerbated by water and electricity outages. Doctors share accommodation – three per house – or live in pre-fabricated homes, while the nurses’ homes are old and dilapidated.

[quote float= right]It’s sad when management doesn’t say: ‘We’re in trouble, we don’t have money and we know we haven’t paid you for six months, but we promise to fix this.’ They just send you a letter threatening you with disciplinary action”

In addition to complaints about their living conditions, doctors are concerned by the lack of skilled personnel at management level. Until recently, there was no CEO, no clinical manager and no nursing services manager. Gloria Mazeka was appointed acting CEO in September 2014.

The hospital, which serves 100,000 people, has six doctors. As a result of the doctor shortage, clinicians are required to work unpaid overtime during evenings and weekends, according to Whitehead. He recalls an incident in which he was told to report for duty by the district manager or face disciplinary action even though he had given the hospital three weeks’ notice that he would not be available for a shift that weekend.

Whitehead says the doctors are willing to assist in times of need, however the chronic shortage is exacerbated by the belligerent attitude of management.

“It’s sad when management doesn’t say: ‘We’re in trouble, we don’t have money and we know we haven’t paid you for six months, but we promise to fix this.’ That is not the attitude, they just send you a letter threatening you with disciplinary action,” he says.

“I attended a training session in Bizana at which there were about 15 South African doctors. I asked them: ‘Why in South Africa do you have people with no clinic experience running
hospitals?’,” says Whitehead.

In response he was told that non-clinicians are less likely to complain, and they tend to say whatever the deputy director general, the superintendent general or the district manager asks them to say.

They paper over the cracks in the system.

“But patients are the ones who suffer. Unfortunately it is only when children or pregnant women die that things happen, but patients on all the wards are at risk,” he says.

“There are dramatic incidents every week, patients dying for no reason. I had a tirade at my nurses because they had given 12 litres of dextrose without any potassium, so the lady just fell over dead. On another occasion they’d not given furosemide over the weekend to a patient because they couldn’t get the stock, so she died.

“There are ongoing issues of stock levels and things not working but we deal with them as best we can,” says Dr Whitehead. “The thing I find saddest is that we (and management) should be working together but there is this constant battle with each other for no reason.

“I’ve never met so many dedicated clinicians. We have great doctors, a fantastic physiotherapist and pharmacist.” A clinical employee bemoans the fact that there is only one
radiographer at this hospital – there should be three to enable the department to run the requisite 24 hours per day. “Even if there were three of them, if they are not paid for overtime
worked, they are well within their rights to refuse to keep the section open for 24 hours,” he says.

As a result, after hours, no X-rays can be performed at the hospital and patients are
referred to hospitals in Lusikisiki or Bizana, 70-90km away.

“The problem in the Eastern Cape is the centralisation of powers,” he says. “You can’t hold people to account if you do not give them the power make decisions. Everything must go to Mthatha to be signed and they refuse to use email because it leaves a trail of accountability. The department has done nothing to improve the situation at the hospital.”

This is an edited version of an article first published in the October edition of the NSP Review.