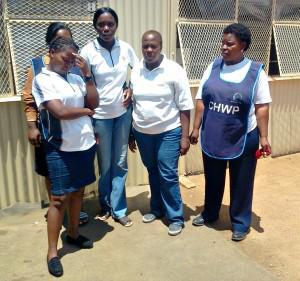 “We are here to demand an (increase),” said community health worker Sarah Ramafalo. “We are asking for at least R1,500.”

Regina Luthuli has been a community health worker for 13 years and has spent the bulk of her career as a home-based care worker. She now works at Soweto’s Mofolo Clinic conducting HIV counselling and testing.

“I like my work that I am currently doing but the issue is that the money I receive is too little,” Luthuli told OurHealth. “The other challenge that I face, but not only me, is the issued of delayed payments from the department of health.”

According to a November statement issued by the Democratic Alliance’s Member of Provincial Legislature and Shadow Health MEC, 70 newly recruited community health workers based at Soweto’s Chiawelo Community Health Centre went unpaid for more than two months in late 2015. Bloom also alleged that newly recruited community health workers had been promised R3,500 a month in pay.

After 13 years as a community health worker, Jermina Mothata said she only takes home a stipend of R2,500 and is struggling to put her son through university.

“I cannot afford to pay his fees,” she said.

Lucky Mokone has been a community health worker for more than a decade and has been protesting delayed payments since 2010.

According to Mokone, while provincial department representatives were wiling to engage with protesting workers regarding pay increases and leave, representatives stressed the decision as to whether community health workers become permanent employees had to be decided at a national level.

According to the Gauteng Department of Health, a follow up meeting was scheduled with workers. The department also asked community health workers to document instances of non-payment while it reviewed contracts.