About a million children develop tuberculosis (TB) annually around the world and when they do, they are often forced to try to take tiny handfuls of adult-sized tablets for months. Now, local researchers are looking at ways to make TB treatment for kids shorter and easier. 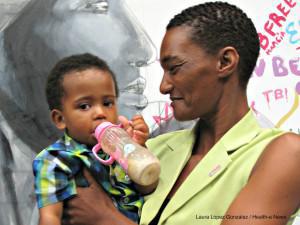 Monique Davids battled for months to get her three-year-old daughter and two-month-old son to take TB treatment due to a lack of child-friendly treatment options.

When the world’s tiniest patients develop active TB, everyone from mom to the local clinic nurse is left trying to crush adult-sized tablets into bitter-tasting, kid-sized portions.

“It’s a real challenge – half a tablet of this, a quarter tablet of that… It’s confusing and we often see caregivers dosing incorrectly,” says Dr Tony Garcia-Prats, medical director of Brooklyn Chest Hospital and head of the Paediatric Pharmacokinetics Unit at the Desmond Tutu TB Centre (DTTC).“These tablets were made to be swallowed whole and taste terrible when you crush them.”

According to DTTC Director Anneke Hesseling, pharmaceutical companies have largely neglected to invest in paediatric formulations because children only make up about 15 percent of the world’s total TB burden.

In 2014, about 40,000 South African children were treated for TB, which takes about six months to cure. More complicated, drug-resistant forms like multidrug-resistant (MDR) TB can take almost two years to cure and involve months of daily, painful injections during which most children are hospitalised. These injections can also leave children permanently deaf.

Later this year, the centre will launch a large, phase three trial to test whether children with TB can be cured in four months, which would shave two months off standard treatment times. This trial will utilise a new child-friendly formulation that combines multiple TB drugs into one small, pleasant-tasting tablet that can be dissolved in water.

The centre also hopes to shorten paediatric MDR-TB treatment regimens in the future to as little as six months while also finding a way to do away with painful injections and save children’s hearing.

If the centre can do this, it will be a major game changer in TB treatment, Hesseling told Health-e News.

“We can cure children with TB, but the challenge is to make the treatment more child and family friendly by making the regimen shorter and giving children medication that is easy to swallow,” she says.

The centre is also part of the world’s first trial to determine the correct dose of the new TB treatment delamanid in children. The drug is already being used in adults. This kind of research is key to helping children access new TB drugs as they come on the market, says Garcia-Prats, who adds that lack of data regarding the TB treatment bedaquiline has kept that drug out of children’s hands.

“Bedaquiline has been licenced in South Africa since October 2014, yet children still have no access to it because no paediatric research has been done,” he explains. – Health-e News.