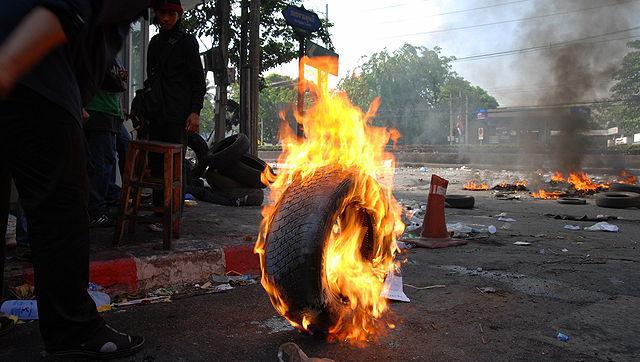 No ARVs for Vuwani residents

Angry over the Municipal Demarcation Board’s decision to incorporate the Vuwani and Malamulele areas into a newly created municipality led protestors to barricade local roads with stones and burning tyres. Protester barricades prevented children from attending school and patients from reaching local clinic for medicine or medical attention.

[quote float = right]I have been doing well since I started using ARVs, but now that I have not been using the pills for the past six weeks my health is deteriorating.’

While some areas seem relatively back to normal but tense there are still parts in the volatile area where access to clinics and health care remains a major challenge.

The situation is worse in the Ha-Mashau area where the recent protest action has meant that no medications could be delivered to the local clinic.

“I have been unable to receive my monthly ARVs since the start of the shutdown as every time I go to the clinic they tell me that they have not yet received the stock due to the continuous protest in the area,” said Mulalo Nugu, who is HIV positive and had been on ARVs for the past two years.

“Even though we all do not want to be part of the newly demarcated municipality, our health must come first,” Nugu added.

“Some of us are now struggling without our medications because of the shutdown. I have been doing well since I started using ARVs, but now that I have not been using the pills for the past six weeks my health is deteriorating.”

The continuous protest action over the past fw months has left 20 schools in the area burnt down by the angry residents.

The Ha-Mashau local clinic from where Nugu usually collects his medications on a monthly basis has, over the past months, does not have medicines or ambulances to service the local residents of the rural village.

Other essential services which are being negatively affected in the area include schools, traffic department, and the local SASSA offices.

All attempts to get comments from the Department of Health in the Province about the way forward for the patients who are unable to receive their medications failed. – Health-e News