The only HIV vaccine that has shown some effect against HIV is now being tested in South Africa. 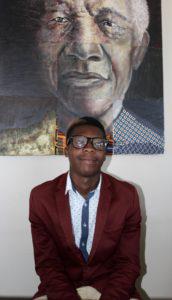 “One day, I want my children to know that their father was part of this experimental AIDS vaccine,” said the serious young man from Browns Farm in Phillipi, not far from the clinic.

Benenengu, a construction worker who lives with his mother and two sisters, said that he volunteered to be part of the Phase Three trial of the HIV vaccine called HVTN702 because he wanted to do something for his country.

Many kilometres away in Verulam near Durban, 23-year-old Nkosiyazi Mncube winced slightly yesterday as his shoulder was pierced by an injection carrying the vaccine.

“I am very happy,” he pronounced when asked how it felt to be making history.

Mncube is a volunteer at the SA Medical Research Council’s site, another of the 15 South African sites involved in the trial which will eventually enroll 5 400 HIV negative volunteers aged between 18 and 35 in testing the vaccine.

These young people are the first Africans to test an HIV vaccine that has already provided people in Thailand with modest protection against HIV.

This is the world’s only efficacy trial of an HIV vaccine (another vaccine trial underway is still testing whether that product is safe), and it is being scrutinized by scientists all over the world.

As HIV is not as prevalent in Thailand as it is in South Africa, scientists have been working for seven years to test the vaccine in a country that has a high HIV rate to see whether it is robust enough to hold out.

Dr Carl Dieffenbach, Director of the Division of AIDS at the US National Institute for Allergy and Infectious Diseases (NIAID), said he had been working “for years and years and years” to get to this point.

“Today is a day of hope, as we launch the HVTN702 trial of the vaccine that builds on the RV144 trial in Thailand,” said a smiling Dieffenbach.

The NIAID is the sponsor of the trial, which Dieffenbach estimates will cost around $120-million, “gave or take a few million”, depending on when the trial ends.

Professor Linda-Gail Bekker, director of the Desmond Tutu HIV Centre which runs Emavundleni, said it had taken seven years from the Thai trial results to set up the South African one. 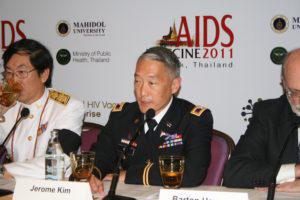 The Thai vaccine was a double whammy – one vaccine aimed at priming the body to recognize the HI virus and a second vaccine given four times over six months aimed at boosting the immune system to fight HIV.

The Thai vaccine was shown to offer 30 percent protection after three years, which is very modest. But Bekker says protection of around 60 percent was recorded after a year.

“We have changed the virus insert so that it contains the version of HIV most commonly found in South Africa [clade C] and enhanced the booster vaccine to make it more durable,” said Bekker. “We are also adding a final booster shot at 12 months.”

Launa Jack, a 21-year-old student who lives in Crossroads, is well acquainted with the vaccine. Over the past two years, she has already been through the entire vaccination process to test its safety before it could be rolled out in this massive final Phase Three trial.

“Some of my friends asked if I wasn’t afraid to be injected with HIV,” said Jack. “But I know that I can’t get HIV from the vaccine. Every time I have come here I am tested, and I am always HIV negative. All I want is for this vaccine to be a success.”

It is still a five-year journey before results of this trial will be known, says Dr Danielle Crida, the principal investigator for the trial at Emavundleni.

“The journey begins with education and recruitment,” said Crida.

Volunteers have to have HIV and pregnancy tests a well as other laboratory tests, before they can be enrolled. Once volunteers have proven they aren’t pregnant or HIV positive, they are enrolled and they need to have five vaccination visits over a year. Three years after enrolling, they are tested for HIV.

“This is a five-year process, so we expect results in about 2021,” said Crida.

So far, 26 people have been vaccinated so the road ahead is still long – but scientists have been battling the virus for 30 years and understand that there is no quick fix. – Health-e News.