The new plan that to guide South Africa’s fight against HIV, tuberculosis (TB) and sexually transmitted infections (STIs) fails to address some of “the drivers of the epidemics”, like overcrowding and sexual violence in prisons.

This is according to activists commenting on the latest draft of South Africa’s new national strategic plan (NSP) on HIV, TB and STIs for 2017 to 2022, published last week, in the lead-up to its official launch on Friday March 31.

Writing in Spotlight, Section27 and the Treatment Action Campaign’s publication dedicated to analysing current and former NSPs, Ariane Neven, from Sonke Gender Justice, and Thulani Ndlovu, from Zonk’izizwe Odds Development, said that this failure could see the plan “fall woefully short of achieving its goals”.

Originally set to be launched on World AIDS Day, on December 1 last year, the plan’s launch was delayed until World TB Day, on 24 March. However, this launch was postponed to 31 March.

The South African National AIDS Council (SANAC), responsible for the development of the plan through multi-sectoral consultation, tweeted last week that date had been changed as the 24th  “clashed with prior commitments for most leaders”.

“Evidence has shown prisons are a key battleground in the fight against HIV and TB. Prison populations are transient, and inmates are released back into their communities, taking with them all of the infections and unhealthy behaviours learned in prison,” notes the Spotlight article.

While the latest draft of the NSP mentions overcrowding in correctional facilities, it does not provide details about how it will be addressed.

“Households where someone has infectious TB, health and correctional facilities, mines (especially with silica exposure), public transport and congregate settings, such as schools, are potential TB transmission ‘hotspots’,” it noted.

“Multi-sectoral collaboration with the Departments of Environmental Protection, Human Settlements, Basic Education, Transport and others is key. The Presidential Infrastructure Co-ordination Committee will be requested to provide guidance on strategies for environmental interventions to reduce TB.”

Addressing prison rape, a key driver of disease in prisons, does not feature in any of the plan’s objectives. The plan does however mention the need to train detention centre staff on prevention of HIV and TB, ramp up screening and access to treatment.

“Surely any plan directed at training correctional centre staff on the prevention of HIV should look first to existing policies, of which the Policy to Prevent Sexual Abuse of Inmates is an excellent one. Why not include the implementation of this policy as an objective?” asked the Spotlight authors.

Prisoners form one of the “key populations” at significantly higher risk of HIV and TB, highlighted in the NSP: “Their engagement is critical to a successful HIV response everywhere—they are key to the epidemic and key to the response.” 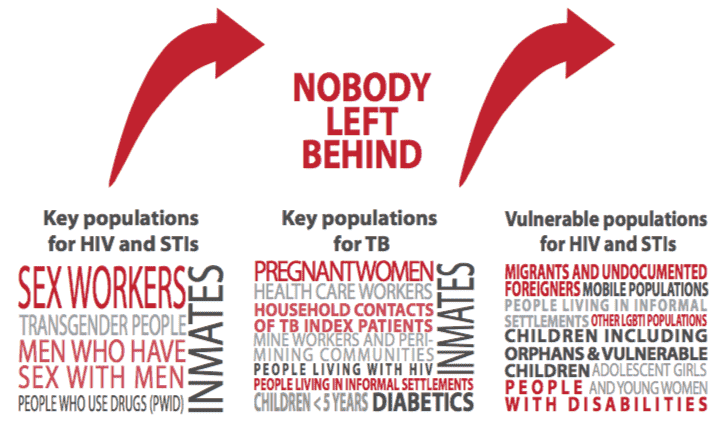 But, according to Nevin and Ndlovu, the gaps in the correctional services aspects, and others, of the new NSP are partly as a result of SANAC’s failure to consult prisoners themselves.

They said the “inclusion of key populations in NSP consultations was made difficult, if not impossible by SANAC’s dismal organisation and planning that left important participants stranded and ultimately not consulted.

“Not only this, but the processes though which provisions are included or left out was entirely opaque, leaving stakeholders frustrated and in the dark, and SANAC, unaccountable.” – Health-e News.

The Healthy Living Alliance (Heala) took to the Rosebank streets on Tuesday, using World Diabetes Day as a significant time to protest against sugary drinks outside Coca-Cola’s new local headquarters.

The odds are stacked against young women, making them continually at risk of HIV as long as society is dominated by men and relationships between young girls and older men are the norm.

Many villagers in rural Vhembe binge on cheap traditional beer, don’t have access to nutritious meals and don’t exercise – a triple combination that can prove lethal.