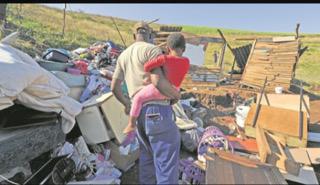 EASTERN CAPE – The Ingquza Hill Local Municipality is fighting a second high court order instructing it to build new houses for more than 150 residents at New Rest in Lusikisiki.

“We are not aware of who demolished the houses in the first place, and so if we rebuild only to have the houses demolished again will be a huge waste of municipality funds,” said Ingquza Hill Mayor Pat Mdingi.

He said that the houses that were demolished had been built on municipal land, but the demolitions were not carried out by the municipality, which has been found responsible for breaking down the houses without having been given a chance to give their side.

We have lost the appeal, but if there is a next step to take, we will do so in order to oppose the court order that we must rebuild the houses at New Rest.

“We have lost the appeal, but if there is a next step to take, we will do so in order to oppose the court order that we must rebuild the houses at New Rest,” said Mdingi.

Angry residents are demanding that their houses be rebuilt in the same area, and are blaming the municipality.

Zakhele Sodlaka, one of the residents of the area and also a victim, said “The people who demolished our houses were wearing municipal outfits and claimed to have been told to do this without discussing anything with us. So we decide to take further action and take the municipality to court. We are not turning back, we want our houses at New Rest.”

“Mdingi and municipal manager Mluleki Fihlani could face arrest if they continue to defy the court order to rebuild the houses on the original site,” Sodlaka said.

Lawyers for Human Rights‘ Mbali Badaza said the next step would be to serve the warrant of arrest on the sheriff of Lusikisiki, and then proceed to arrest the municipal manager as well as mayor.

It has also been alleged that the land that the residents built on belongs to the government. The original owners were moved and paid for the property.

Mdingi said the conflict was now a political battle over land and no longer a social battle with destitute families. – Health-e News.