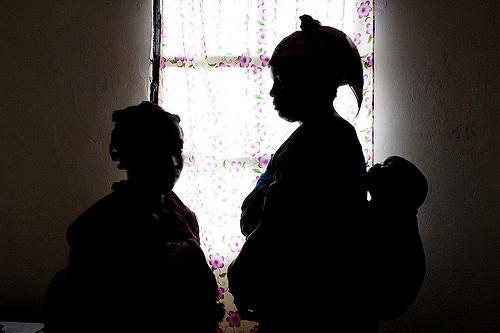 Many battered women who feel they cannot leave their situations – either because they have nowhere to go or they fear for their lives – can access help.

While shelters for offer the survivors of domestic abuse safety and a place to heal, limited resources mean that those helped need to move on as soon as possible to make place for other women.

Seabi Thloriso (30) is from KwaThema, East of Johannesburg and is currently staying at the Leratong Place of Love in Springs. It is a centre that belongs to the Methodist Church of Southern Africa, and is a safe shelter for the victims of gender-based violence.

Sitting on the couch holding her four-month old baby she explains how she came to be there.

“I was in a relationship with the father of my children for more than five years. We have two children – a four-year old and this baby,” Thloriso said.

She explained that her husband would regularly get drunk and physically abuse her.

“He will call me names and beat me up for no reason. He was beating me while I was pregnant with our second child, and even when the child was born he continued beating me – always when he was drunk.”

According to Thloriso, she decided to end things when her newborn was six weeks old. She went to the police to ask for a protection order and to be taken to a place of safety.

“I did not open a case against him because I am a Christian and I don’t want to hurt other people,” she said, explaining why she felt the protection order she asked for was better than laying criminal charges.

“I left the four-year old child with him and I took the baby with me,” Thloriso said.

Forced to be a wife

She has no intention of ever getting back together with the father of her children, or involving herself in another relationship as she doesn’t trust men anymore.

Mantwa Maduna (32) is another resident at the shelter. She was forced to be a wife to a man she did not love for eight years.

“I was working with him in Heidelberg. One day he came to me and told me that he wants me to be his wife, and I refused,” she said, leaning her forehead on her hand as she told her story.

She says the man kidnapped her at gunpoint and took her to Qwaqwa in the Free State.

“We lived in a shack where there was no privacy, yet I had to give him sex whenever he wanted. He would sleep with me while there were kids in the same house and because it is a shack everyone in the house can hear what is happening in the next room.”

Maduna said although the man she lived with did not drink, he was abusive verbally and physically.

When the man was hired by a family to transport them to Bethlehem and stay overnight last December, Maduna decided run away.

“This was when I said yes, this is my chance to escape.”

With the help of the man’s sisters Maduna managed to leave the house and spent a night at the taxi rank.

“I was in the first taxi to Rustenburg in the morning,” she said. She made her way to a friend’s house where she was encouraged to go to the police and open a case. She was then taken to the shelter.

Maduna believes that staying at Leratong has helped her to heal and forget about her past life of abuse.

“Women must report any form of abuse, there is help out there,” she said, hoping to encourage others who feel trapped.

The Leratong Place of Love manager Prudence Davids said organisations like hers need assistance from the government.

“We can only help these women for six months, and after that, they must look after themselves in order to make way for other victims who need a safe place,” said Davids.

According to Davids, the women have daily sessions with a social worker.

“The sessions help to counsel and heal them, and they are also allowed to attend Bible studies. We have a church right here in this yard,” said Davids.