Home » Taking the pain out of kiddie TB tests

For children with suspected tuberculosis (TB), diagnosis is difficult and can often be painful and complicated. In a vulnerable population where many kids are being missed new diagnostics are critical. And preliminary results from a South African trial have given experts in the field, and patients, a glimmer of hope.

Taking the pain out of kiddie TB tests 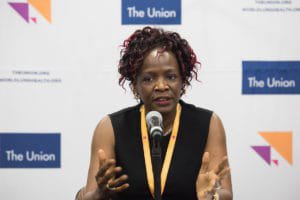 At the Union conference Dr Angelique Luabeya, from the University of Cape Town, announced a simple but ingenious oral swab test that could revolutionise TB detection in children (Photo: Marcus Rose/The Union)

Each year, there are one million cases of TB in children globally, according to Dr Jeffery Starke, an international paediatric TB expert based at the Texas Children’s Hospital in the United States.

Speaking at the Union World Conference on Lung Health that took place in Mexico earlier this month, Starke said that two in 10 of these children die, despite the disease being largely preventable and treatable.

Research has shown that a staggering 96 percent of these deaths are in children who were never started on anti-TB drugs. This Starke said, is because it is difficult to diagnose in kids, so TB is often misdiagnosed as pneumonia or meningitis, for example, leading to incorrect treatments and unnecessary deaths.

He urged that children should become a priority and should no longer be excluded from research and access to new anti-TB tools. A new diagnostic approach, announced at the conference, may have the future potential to find these cases before it’s too late.

Traditionally, TB is diagnosed with a sputum sample: mucous coughed up from the respiratory tract. But, according to Dr Paula Fujiwara, the scientific director for the Union Against TB and Lung Disease, children – particularly those under the age of 10 – often don’t have enough force to cough such samples up.

One of the only available alternatives, also used in South Africa, is gastric lavage where a tube is passed through the nose to the stomach of the child to extract the contents which are then sent to a lab to test for TB. These contents could include swallowed mucus containing TB bacteria from which a diagnosis can be made.

But, said Fujiwara, “it is very invasive” and difficult for health professionals to complete the often-painful procedure on a crying child. To make matters worse, for an accurate diagnosis a sample should ideally be taken three days in a row, forcing patients to be admitted to one of the country’s already over-crowded hospitals.

Because of these barriers, TB in children is often diagnosed “clinically”, based on a set of algorithms linked to TB symptoms. Another option is a diagnosis with a chest X-ray – a piece of equipment not available in many resource-constrained settings where TB rates are often highest. Neither of these methods actually confirm the presence of TB bacteria or offer an efficient, effective and affordable solution for diagnosing TB in children, said Fujiwara.

While previous studies have looked at using saliva, urine and stool to test for TB with limited success, for the first time new research is investigating looking at oral epithelium, the cells on the surface of the moth, and, she said, the results “are promising”.

Preliminary research from the University of Cape Town (UCT) showed that using oral swabs, testing samples from the tongue, cheeks and gums of patients can detect TB in both children and adults.

“The beauty of it is it is so simple we wondered why no-one had done it before. Why not test oral tissue because, after all, patients cough the bacteria through their mouths,” Dr Angelique Luabeya, one of the lead researchers, told Health-e News.

Researchers first tested 20 samples from already-confirmed TB patients in the Western Cape. Eighteen of these oral samples tested positive for TB in the lab – translating into a 90 percent sensitivity rate.

The results were so promising that the study has been extended and researchers plan to enrol 275 patients in its next phase.  It already has results for 49 samples. Of these, 45 samples tested positive for TB translating, into an even higher sensitivity rate – 92 percent. The researchers have also found that tissue scraped from the tongue yields the best results. According to Luabeya, this is because it is not smooth and has a large surface area TB bacteria is likely to stick to.

The implications for the success of this trial are massive, particularly for children.

“It would be so easy to take a sample. My daughter could do it,” said Luabeya. “Patients themselves could even take a sample – it would be as simple as brushing your teeth and nobody does that for you.”

A small brush is used to scrape the inside of the mouth after which the brush is sealed in a small container and sent to the laboratory for testing.  In contrast, sputum testing requires a patient to cough up mucous; a process that, if not done under the right circumstances, can even aid transmission of the air-borne disease.

She said the “long-term” aim of the initiative, if it shows continued success, would be to develop a point of care device that can diagnose the sample where the patient is located in a matter of minutes. This would solve the infrastructural barriers of laboratory diagnostic methods.

Focus on TB in kids

Dr Lindiwe Mvusi, head of TB control at the National Department of Health, said that the latest available data shows that, in 2015, 503 South African children on anti-TB treatment died – equating to 1.5 percent of all treated cases in kids.

While guidelines for detecting TB in children exist in South Africa and do help to find missing cases, including screening kids who have been in contact with known TB cases, she admitted that “children are missed because of difficulties in diagnosis”.

For Fujiwara, this South African research, part of the Tuberculosis Vaccine Initiative, is “fascinating” and could revolutionise TB diagnosis in kids – a significant gap in a vulnerable population.

“I think we can all acknowledge this would change how we diagnose TB in children generally,” she said.

Starke said that although children have been long-neglected in the TB field, we may be at a “tipping point” as more attention is being paid to the particular needs of kids. Research like that coming out of UCT is important in making this a reality.

He said, although not always a reality, “children have the same rights as adults to benefit from TB care and research. But we need the political will and the financing.” – Health-e News.