Teen pregnancies have dropped, while our cure rate for tuberculosis (TB) is the highest in a decade.

Teen pregnancies down, TB cure up 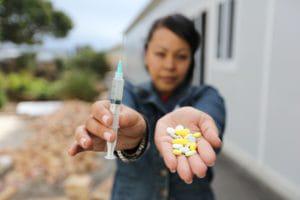 XDR patients have to take a combination of pills and injections to try to cure their TB, often with terrible side effects.

Less than seven percent of all hospital births were to teen mothers in 2016/17, with the lowest in Gauteng (less than five percent). In contrast, a decade ago almost 15% of teenage girls were likely to fall pregnant, according to the District Health Barometer 2016/17 (DHB), which was launched this week.

But teen pregnant is still high in the Northern Cape, where one in 10 births are to girls under the age of 18 and in the Alfred Nzo district of the Eastern Cape, almost 13% of births are to teenagers.

In other good news, our cure rate for TB now stands at 81% – the highest since 2005, according to the DHB, which is produced annually by the Health Systems Trust.

But only half the people with drug-resistant TB are cured. One-third of multi-drug resistant (MDR) patients die in E Cape and North West. While in the JT Gaetsewe district in the Northern Cape, almost 60% of MDR patients died.

Drug-resistant TB is a particular problem in three KwaZulu-Natal districts – King Cetshwayo, uMkhanyakude and Zululand – where every 10th case is resistant to Rifampicin, the main TB medicine.

“It is important to note that a large proportion of HIV deaths has been misattributed to immediate causes of death such as TB, diarrhoeal diseases and lower respiratory infections,” note authors Pam Groenewald and colleagues.

The greater Pietermaritzburg area, uMgungundlovu, has the highest rate of HIV and over one in five people are living with the virus (20,6%). KwaZulu’s Zululand and Ugu, Gauteng’s Sedibeng and Mpumalanga’s Ehlanzeni also high HIV rates.

Slightly more than a third of primary healthcare patients were tested for HIV. Limpopo was the best, testing half its patients, while the Free State was the worst (27%). By metro, Tshwane and Mangaung had the lowest HIV testing rates (22.5%).

South Africa has the largest anti-retroviral treatment programme in the world. But only 55% of patients – around 3,8 million people – remain on their treatment. The drop-out rate is worst in Gauteng (45%) but some of this could be linked to people moving.

However, 95% of pregnant women with HIV were put on ARVs and this has slashed the HIV rate of newborns to 1.3%.

While HIV and TB rates are dropping slightly, a collection of non-communicable diseases (NCD) – particularly cerebrovascular diseases, ischaemic heart disease and diabetes – are on the increase.

But the DHB notes that the detection of hypertension and diabetes is not good enough: “High-risk screening for diabetes should be implemented at all facilities to ensure early detection, diagnosis, appropriate management and control of patients to avoid primary and secondary complications.”

Over half the deaths in the Western Cape are due to NCDs, while injury accounted for 18.6% of deaths.

“Of concern is the dramatic increase in ‘accidental’ gunshots (actually interpersonal violence) since 2012 in Cape Town The increase … is thought to be associated with increased availability of illegal firearms,” the Barometer notes. – Health-e News.