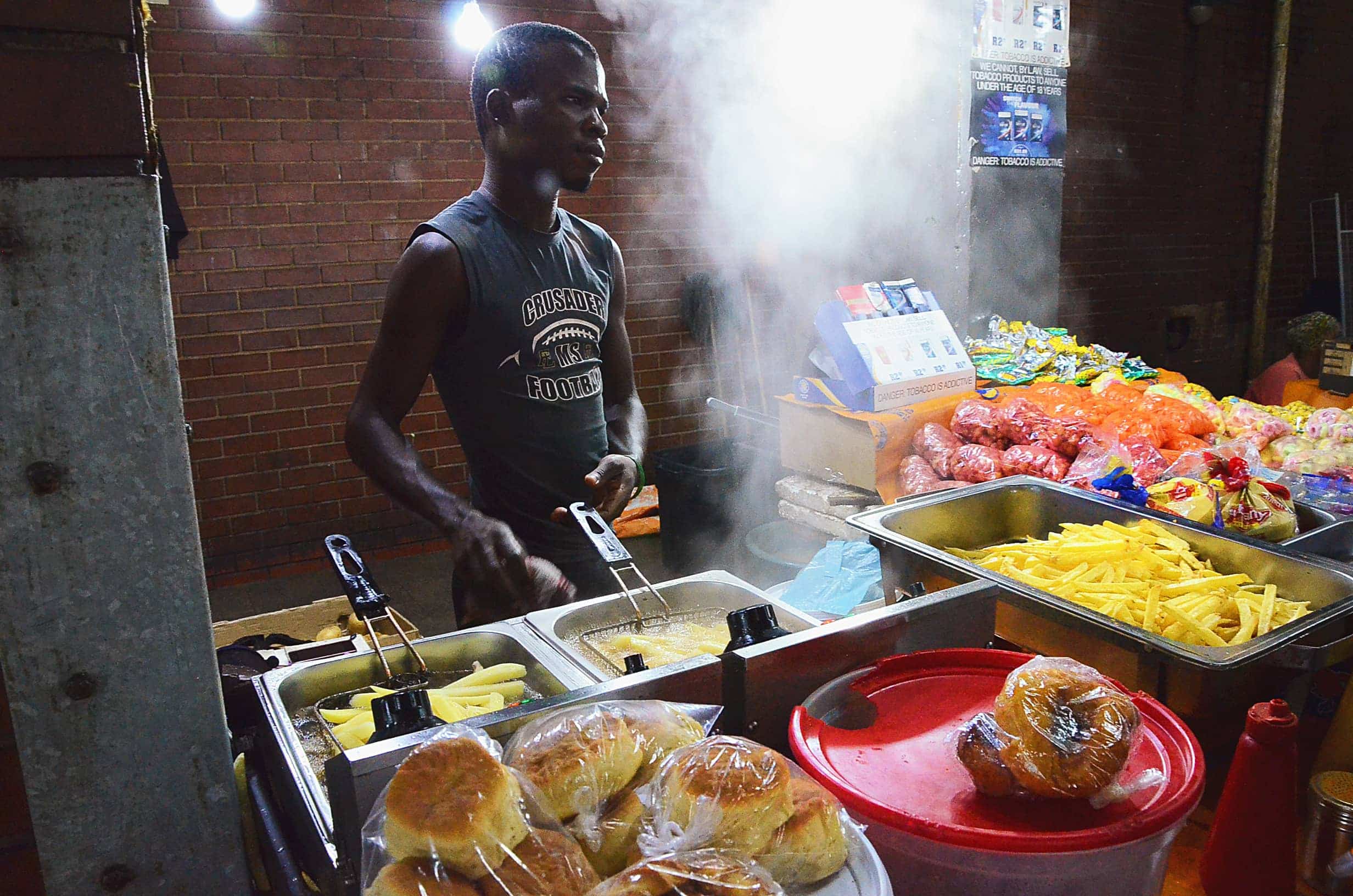 Over half the population has unhealthy levels of body fat. At Johannesburg’s three busiest taxi ranks, energy drinks, chips, pap and meat are the most popular morning purchases. But what influences these choices? Cost? Taste? Accessibility? Health-e News’s AMY GREEN and THABO MOLELEKWA try to find answers.

It’s eight in the morning and Bree Street taxi rank in Johannesburg is buzzing with activity. People hurrying to work only stop for a moment to buy food from the dozens of vendors lining the walls of the dark rank.

Every morning Ishmael Kroos arrives at Bree taxi rank at five to start his shift. The 21-year-old Malawian-born man works for 13 hours at his station: a stall inside the dark rank where he sells fried chips, crisps, sweets, vetkoek, scones and some fruit. This morning a handful of people crowd in front of his stall, attracted by the strong smell of vinegar and the sound of frying chips.

“Everyday I buy chips here, they taste mnandi [nice],” said Constance Sibiya as she waits for her R7 meal. A double portion of chips costs R15. As she pours salt into the square polystyrene container, she said that, along with being tasty, the chips are “affordable” and filling.

Looking at the fruit arranged in front of Kroos’ sweets and crisps she said that “I don’t ever buy that”. Kroos also sells bananas (R2.50 each), apples (R3), peaches (R4) and plums (R2).

Half an hour later, there’s a lull in customers and Kroos sits on a stool and begins to peel potatoes at a record pace, throwing the peels into a cardboard box lying on the ground next to him.

“Most people buy the chips. Some buy fruit, but they don’t buy both,” he said. 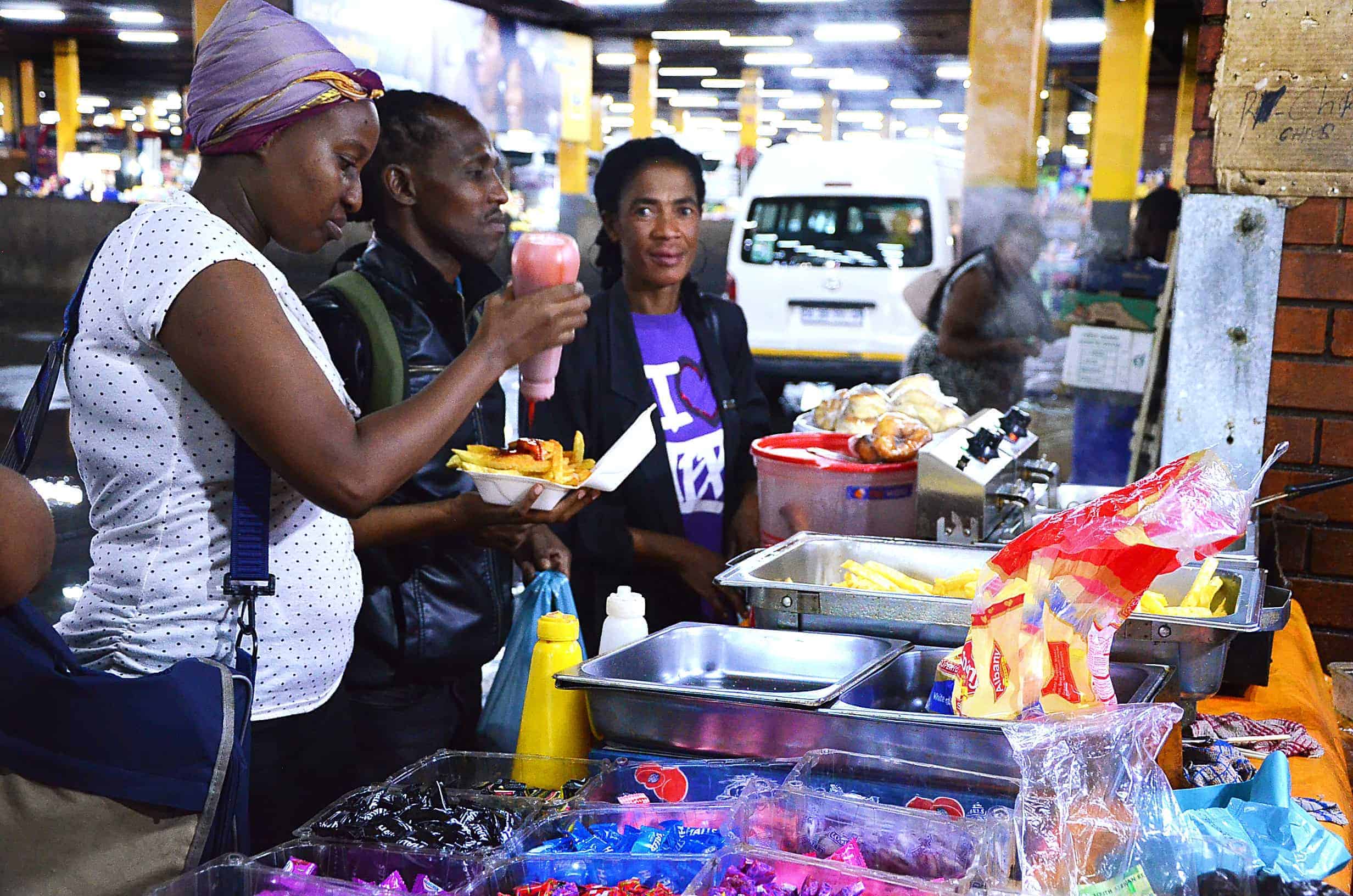 Constance Sibirya has chips for breakfast every morning from Bree taxi rank because she likes the taste and they are filling. (Credit: Kim Harrisberg)

South Africans love salt, according to registered dietitian Megan Lee from the Heart and Stroke Foundation. “On average, the current salt intake levels in South Africa range from six to 11g of salt per day, reaching more than double the global recommended limit of 5g,” she said.

While eating fried chips once in a while poses little health risk, consuming them daily, especially with a significant amount of added salt raises the risk of developing high blood pressure.

Almost half of all South Africans over the age of 15 have high blood pressure, according to the 2016 Demographic and Health Survey. This is the leading risk factor for heart disease – the world’s number one cause of death.

But many people choose fried chips as a breakfast option based on cost, taste, the fact that they are filling and easy to eat on-the-go, fitting in with commuters’ long days in the country’s most populous city.

Next door to Kroos’ stall, Nokuthula Ndala sits behind her display of sweets and crisps. She has been selling snacks at Bree for about 10 years and said she pays R60 a month to rent the space. An almost-empty bucket with melting ice stands in front of her stall; a few soft drinks and energy drinks swim in the cold water.

“More people buy energy drinks than other things, especially taxi drivers,” said the elderly woman, originally from KwaZulu-Natal. The drinks are cheap: one 440ml can is just R10 and most of the vendors in the rank sell a variety of different brands for the same price. Bottled water is scarce and only sold by a handful of the vendors here. 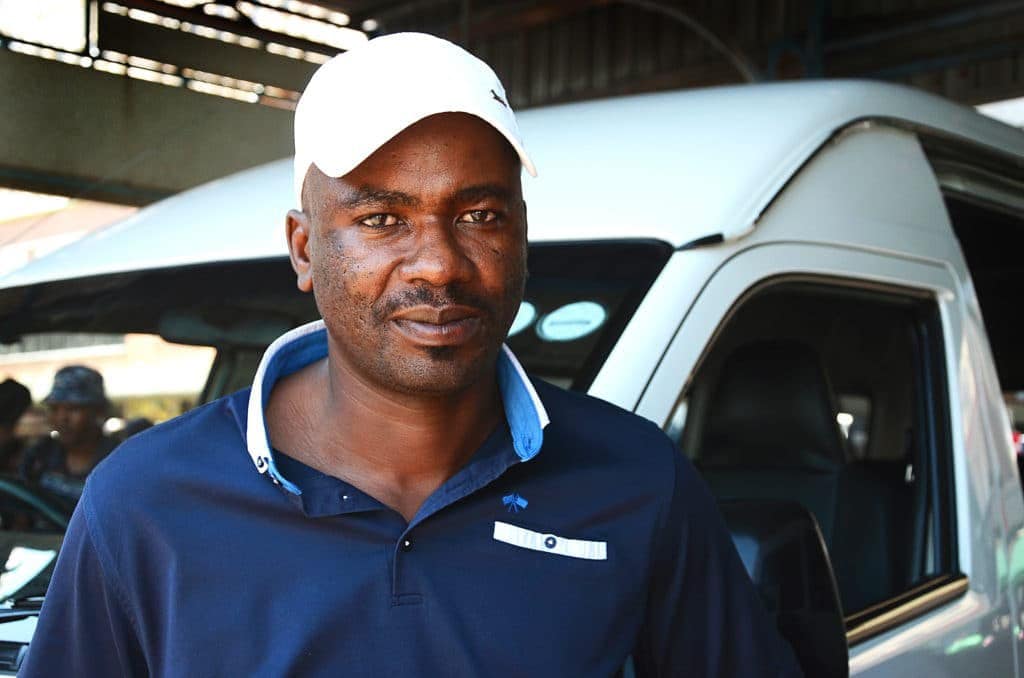 Patrick Maseko has been driving taxis for over 20 years and said he can’t do his job without energy drinks. (Credit: Kim Harrisberg)

Just over a kilometre away, at Park Station taxi rank, Patrick Maseko and Sibusiso Mkhize, lean against a white Quantum. Both taxi drivers, between them they have a total of 31 years’ service transporting people, and drive to KwaZulu-Natal and back most days.

“We maybe drink one bottle of water a day but then we drink energy drinks,” said Maseko.

Mkhize agrees: “We need the energy drinks to drive long distances so we don’t fall asleep on the road. We can’t live without them.”

Along with their energy drinks, the two said they eat pap and meat for breakfast which they buy from the women outside the rank.

“Sometimes we do eat fruit. I like bananas and apples,” said Mkhize.

According to a study conducted by Priority Cost-Effective Lessons for Systems Strengthening (PRICELESS), a research unit at Wits University’s School of Public Health, energy drinks are a fast growing segment of the South African soft drinks market. Between 2009 and 2014 annual sales of sports and energy drinks rose from 97.7 to 167.7 million litres.

One 500ml can of Dragon energy drink contains about 14 teaspoons of sugar, which exceeds the World Health Organisation’s recommended maximum daily intake of 12 teaspoons of sugar. But the WHO said that a reduction to below just six teaspoons a day would have “additional health benefits”.

Sugary drinks have been linked to a number of obesity-related diseases including diabetes and some cancers, and our rising consumption is worrying in the context of South Africa’s growing obesity epidemic, where over half of the population has unhealthy levels of body fat.

According to Statistics South Africa, from 2015 diabetes became the second biggest cause of death in the country after tuberculosis but it is the biggest killer of women, who tend to be more overweight than men. 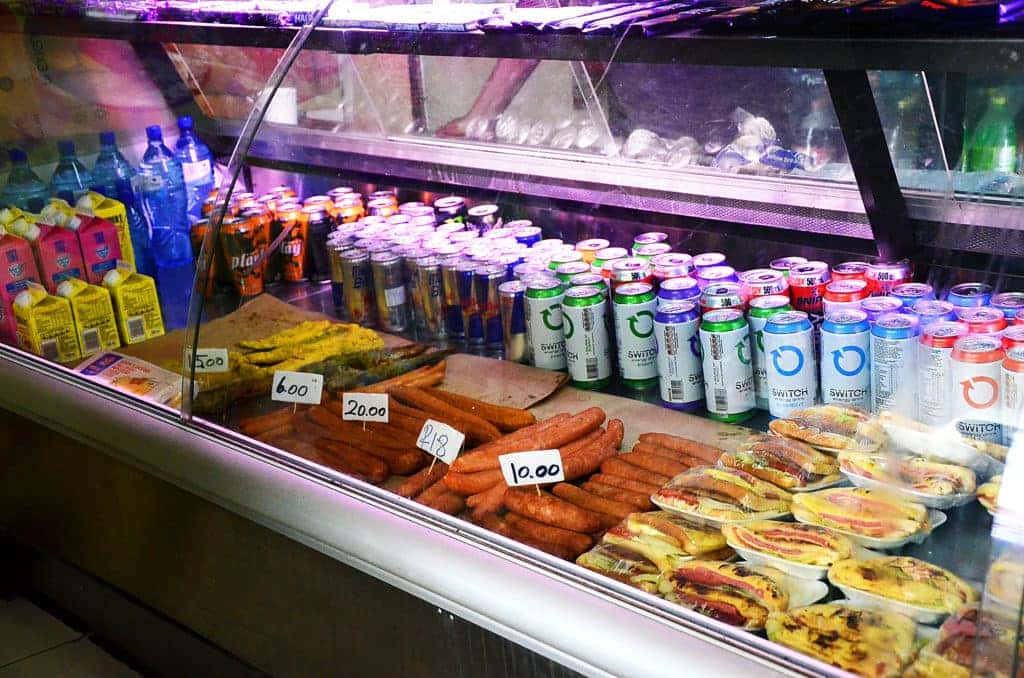 Energy drinks are a favourite at Plus Takeaways at MTN taxi rank. (Credit: Kim Harrisberg)

According to PRICELESS the other concerns with energy drinks specifically relate to the high caffeine content and high acidity which can lead to tooth decay. They noted that excess caffeine is related to heart palpitation, high blood pressure, nausea and even convulsions.

The ubiquity of energy drinks and fast food continues if one walks a block down the road to MTN taxi rank.

At Plus Takeaways, a popular fast food outlet just outside the rank, energy drinks, chips and meat line the glass display separating the shop’s manager Enzo Salvator from his customers.

“Most people buy chips or pap in the morning,” he said. A plate of chips costs R15 but with meat the meal is R30. “People also like Dragon and Switch [energy drinks], more than Coca-Cola or anything.”

The cheaper energy drinks are more popular at R10 a can, while Red Bull and Play cost double that.

While there is no fruit visible at this rank, back at Bree one can find a wide range of different fresh produce. Lincoln Mlambo’s stand is filled with all kinds of fruit from grapes to nectarines but he said that bananas are the most popular.

Farmers bring fresh fruit once a week and sometimes they “decay” and have to be thrown away because of the lack of refrigeration.

“But this doesn’t happen every time because people are buying. Everyone likes fruit,” he said grinning as he packs two mangoes into a packet for a customer. 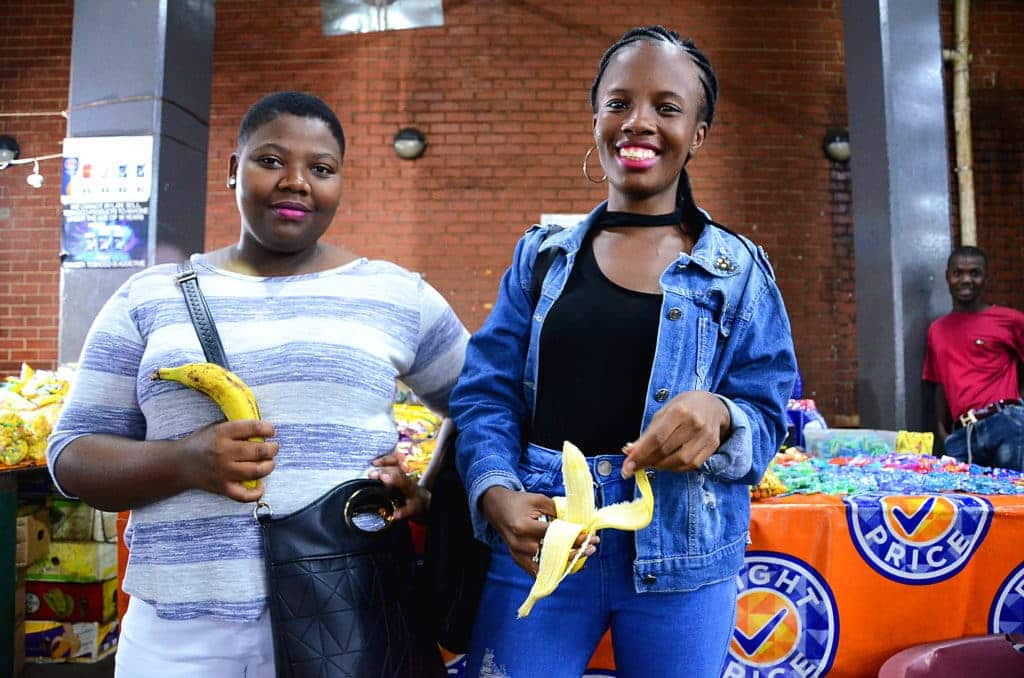 Health-e compared the prices to a prominent supermarket chain and found out that the fruit sold at the taxi ranks is slightly cheaper. At the supermarket one can pay almost R4.50 for an apple compared to R3 at Bree, a banana costs R4 compared to R2.50 and a mango is R7 compared to R6.

Nutrition expert from the University of the Western Cape Professor David Sanders said that a full fruit breakfast can be a good healthy option “depending on what people eat for the rest of the day”. For example, a banana, apple and peach (which would cost R9.50 from Kroos) would be “adequate” if later in the morning one ate some unfried protein, such as boiled eggs, and unrefined carbohydrates such as whole wheat bread or a baked potato.

“But these are often not accessible for people who don’t have time or energy to prepare them, and more expensive. When you consider 70 percent of South Africans earn less than R3500 a month, a healthy daily diet is often out of reach,” Sanders said.

The daily inequality in South Africa impacts nutritional inequality too.

“High salt, fat and sugar diets are often the only convenient choice for average South Africans who, even if they want to be healthy, may not be fully aware of the negative health impacts. It goes back to apartheid spatial planning where people have to commute long distances, leave their houses early and have no time to cook. Fast food vendors are positioned ideally and quite a lot of food is consumed this way,” said Sanders.

Meanwhile, students Ntando Zwane and Lebogang Chakela each peel a banana from Kroos’ stand. “I like to eat a banana every morning because it can keep me going for hours,” said a smiling Zwane. “Healthy foods are more expensive because you can see here a vetkoek is R1 and a banana is R2.50 or R3. We do eat the vetkoek but we still try to be healthy.”