Patients at Tembisa Hospital in Ekurhuleni are complaining that their health is in danger as the hospital is overcrowded making infection control difficult.

A source who works at the hospital’s clinic said he was concerned about the patients in Ward 8 and the conditions they live in every day.

“Our people are dying in that hospital. The wards are full – especially ward 8 – and patients are sleeping on floors,” said the source.

He recently visited the ward on a Sunday to witness first-hand the problems the patients have been complaining about, only to discover conditions in the isolation room were even worse. 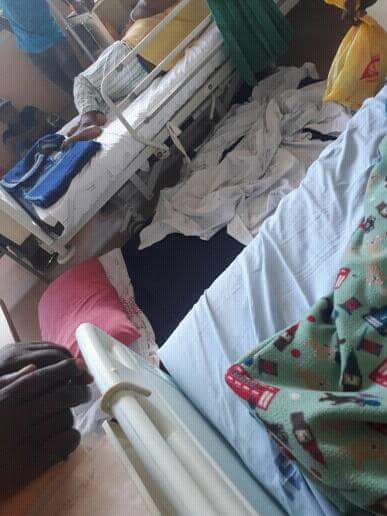 Patients sleep on the floor at Tembisa Hospital.

“The isolation room for MDR TB patients is even worse, and nurses are scared of going into that room,” he said.

According to the source, a few civil society organisations from Tembisa have tried to meet with the hospital CEO without success.

“Their job is to make sure that our people get quality health care, but it is not happening in Tembisa,” he said.

The source said staff themselves were afraid of becoming infected.

“A nurse I spoke to said they are scared of being infected as this hospital is overcrowded,” he said.

Sibongile Mlata, a 30-year-old woman from Tembisa, said she had to queue for a bed for seven days before she gave birth.

“I arrived at Tembisa Hospital on the 5th of December last year to give birth by Caesarean. I had to wait on chairs for seven days before I had the surgery on the 12th,” she said

Mlata said that pregnant women were told that beds at the theatre were full, so they had to put their names on a list and wait to be called.

“I don’t wish anyone to experience what I went through in that hospital,” she said.

“The overcrowding is often due to, amongst other things, the high disease burden in our society and other social problems that keep patients longer in hospital,” he said.

He added that some patients and relatives do not accept being transferred to the facility referral route due to the distance that they will then have to travel from Tembisa Hospital to visit their loved ones.

Mgoladi said sometimes patients were sent to other nearby hospitals, but this did not always work as Tembisa is accessed by so many walk-in patients.

“When all beds are occupied to capacity we arrange diversions to nearby hospitals situated in our cluster,” said Mogaladi.

“However, due to a large number of patients who access the hospital as walk-ins, the diversions at times are still unable to assist with overcrowding,” he said.

He said the overcrowding at Tembisa Hospital would be addressed by the construction of a new hospital in the 2018/19 financial year.

“The demolishing of the existing Kempton Park Hospital structure to build a new facility is planned to go ahead this year,” he said.