Electronic smoking devices are harmful and not helping people to quit smoking, according to experts at the World Conference on Tobacco or Health.

The University of California San Francisco (UCSF) has found that “while e-cigarettes deliver lower levels of carcinogens than conventional cigarettes, they also expose users to high levels of ultrafine particles and other toxins that have been linked to increased cardiovascular and non-cancer lung disease risks — which account for more than half of all smoking-caused deaths”.

“E-cigarettes are widely promoted as a smoking cessation aid, but for most people, they actually make it harder to quit smoking, so most people end up as so-called ‘dual users’ who keep smoking while using e-cigarettes,” according to Dr Stanton Glantz, the director of the UCSF’S Center for Tobacco Research, Control and Education.

Phasing out cigarettes in shops

Between 2012 and 2015, the UK phased out the display of cigarettes in shops, and all cigarettes now have to be hidden behind shutters but “as tobacco was removed, e-cigarettes came in and took their place within their displays,” UK scientist Catherine Best told the World Conference on Tobacco or Health

Meanwhile, in Italy, the number of non-smokers who wanted to try the new Philip Morris product, IQOS, a tobacco-based “heat-not-burn” product, outnumbered the current smokers.

Dr Silvano Gallus, from the Department of Environmental Sciences in Milan, said that the IQOS – which got its name from “I Quit Ordinary Smoking” – had achieved the opposite.

“When they were first launched, they were meant to encourage people to stop smoking. In the end they got more people hooked, including attracting non-smokers to becoming addicted,” said Gallus.

Late last month, a study of almost 70,000 people led by UCSF found that daily use of electronic cigarettes nearly doubles a person’s risk of a heart attack.

“Someone who continues to smoke daily while using e-cigarettes daily has an increased risk of a heart attack by a factor of five,” according to Glantz, who co-authored the study.

Fitness trainer, Nyiko Masango, is cycling from Tzaneen to Tanzania to raise awareness about absentee fathers.

“No jobs, no vote,” shouted unemployed nurses who marched to O.R Tambo Health sub-district offices in Lusikisiki last week. The unhappy nurses sang, carried placards and handed over a memorandum demanding that the Eastern Cape Department of Health employ them in the Ingquza Hill municipality. 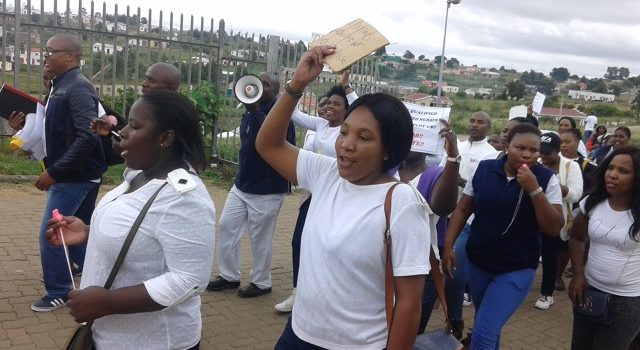