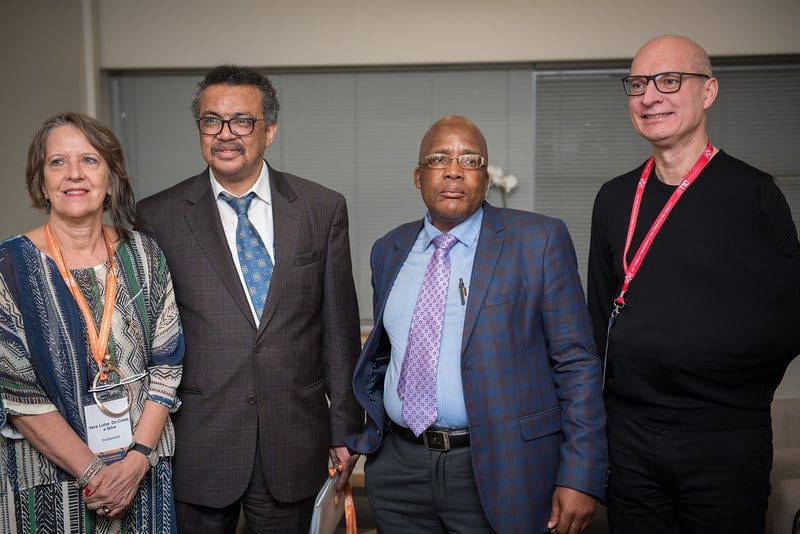 Tobacco consumption has increased by 52 percent in Africa since 1980, and 77 million Africans now smoke.

The biggest increases in smoking have been in Lesotho, where an estimated 54 percent of people now smoke and the Democratic Republic of the Congo, where 43 percent of the population smokes.

Experts predict that, if the current trend continues, 500-million Africans will be smoking in the next 30 years – bringing increases in cancer, heart and lung diseases.

In contrast, smoking in high-income countries has decreased substantially as people have become more aware of the serious health damage it causes, with a 44 percent reduction in the Americas and a third cut in Europe.

“It’s fitting that we are meeting in Africa because it is ground zero for the war on tobacco,” Tedros told the World Conference on Tobacco or Health, which was held in Cape Town this week.

“Africa is seen as a growth market for the tobacco industry. Africa has made great strides on some health issues, such as HIV/AIDS, but the tobacco problem is in its early stages and is not being given sufficient attention.”

Opening the conference, Health Minister Aaron Motsoaledi said that “all the signs are there that the tobacco industry is staging a fight-back after a slew of tobacco control legislation in the past two decades”.

Emma Wanyonyi, chief executive of the International Institute of Legislative Affairs in Kenya, said it had taken 10 years for tobacco control laws to be passed in her country because of industry interference.

“Every time the time came for Parliament to vote, there was a holiday or an adjournment,” said Wanyonyi. “More recently, government officials were approached and offered bribes to take actions that support the industry, not only in Kenya but in Burundi and Uganda. We need to think of ways to address this.”

Help for Wanyonyi’s dilemma may lie in the new initiative announced at the conference by billionaire philanthropist Michael Bloomberg, who has donated $1-billion to tobacco control efforts since 2007.

“Over the last decade tobacco control measures have saved nearly 35 million lives, but as more cities and countries take action, the tobacco industry is pushing to find new users, particularly among young people,” said Bloomberg, who is also the WHO’s Global Ambassador for Non-communicable Diseases.

“We cannot stand by as the industry misleads the public in an effort to get more people hooked on its products – and this global watchdog will help us hold the industry accountable.”

The watchdog will deliver regular reports detailing tactics and strategies both at global and country-level and will provide tools and training materials for countries to combat Big Tobacco’s influence, according to Bloomberg Philanthropies.

STOP has been launched partly in response to the establishment of the Foundation for a Smoke-Free World, bankrolled by Marlboro maker Philip Morris International (PMI), which is donating $80-million a year for 12 years. The foundation is headed by a South African and former WHO official, Derek Yach.

“STOP is a warning call to Big Tobacco that they are on notice,” said Tedros, who appealed to all governments not to co-operate with the new foundation which is being seen as industry’s attempt to promote e-cigarettes that deliver nicotine from vapour and heat-not-burn e-cigarettes.

“The WHO and our partners will not accept efforts to undermine the huge successes in tobacco control that we have achieved over the past few decades. There is no going back.”

But Tedros said there were also “many reasons for hope” in the continent.

Motsoaledi admitted that South Africa had “lagged behind” in its tobacco control efforts, but promised that government’s long-promised new regulations on smoking were in the process of being finalised.

These regulations will ban smoking in all public places (removing smoking sections in restaurants), make cigarette manufacturers remove their branding from packs, and also put graphic pictures of the health effects of smoking on the packs. They are also aimed at regulating e-cigarettes, said Motsoaledi.

Health Director General Precious Matsoso said the draft regulations were being considered by a Cabinet sub-committee and would be published for public comment within the next few weeks.

“I had hoped they would be published this week to coincide with the conference, but they are still being discussed by the Cabinet sub-committee,” said Matsoso.

One region with an even greater increase in smoking than Africa is the eastern Mediterranean region, which includes Egypt, Iran, Jordan, where smoking has increased by 65 percent.

But, said Tedros, six out of 10 people in the world were now protected by some of the measures developed by the WHO against smoking,

Bloomberg also said that there had been remarkable gains in tobacco control: “In the US, you cannot go into a restaurant and smoke. In Shanghai, the government owns the tobacco companies but it no longer allows smoking in public.”

One such gain was the success Australia has had in getting pension funds to disinvest form tobacco companies.

Dr Bronwyn King, a radiation oncologist and founder of Tobacco Free Portfolios, told the conference that her organisation’s work with finance industry executives had seen over 40 percent of Australian pension funds implementing tobacco free investment mandates, which had translated into a $2.5 billion disinvestment in tobacco stocks.

“I have never met a finance person who wants their child to smoke. That feels like a good place to start,” said King.