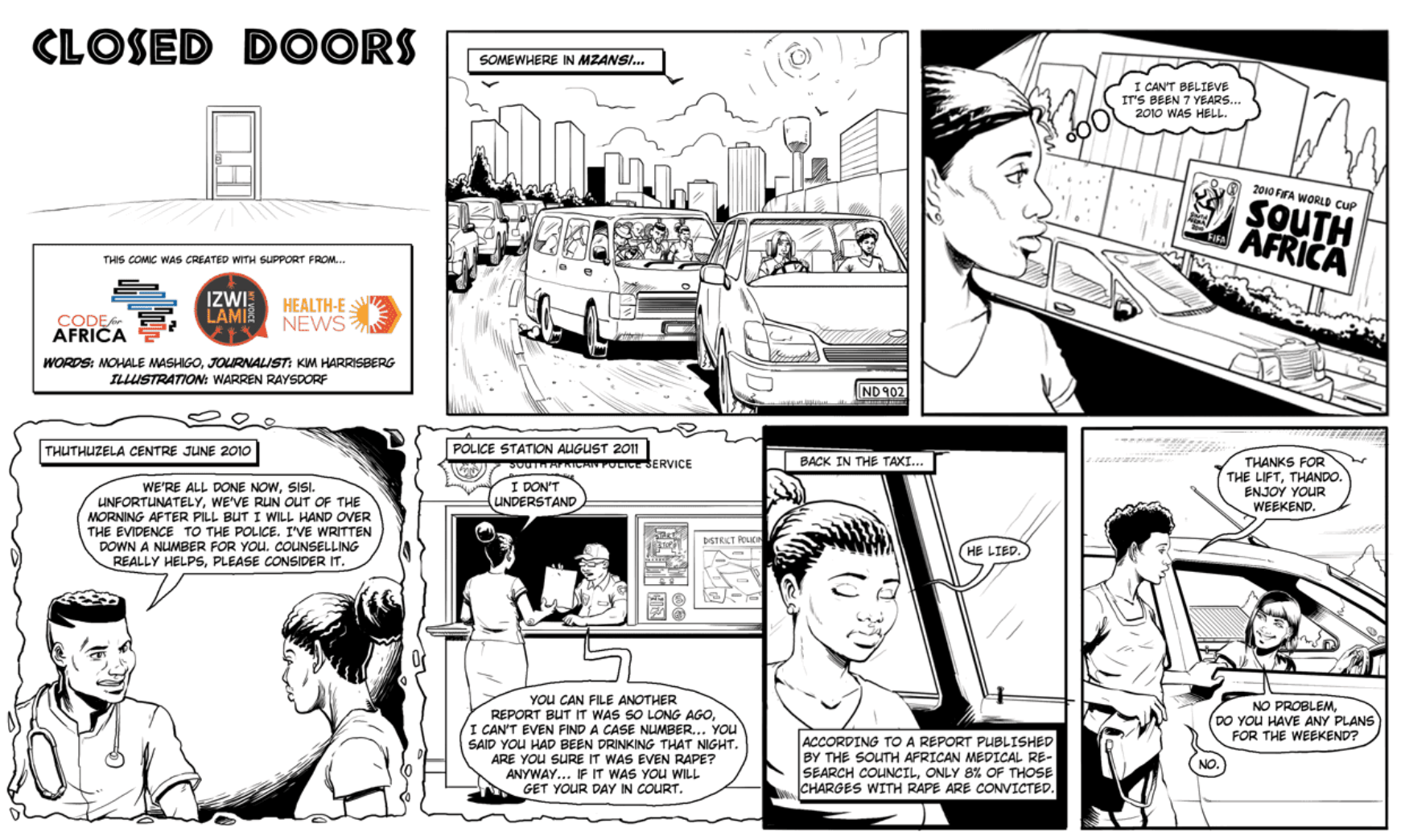 The stories in the graphic illustration reveal the real testimonies of rape survivors sent in to Health-e News using the Izwi Lami SMS line.

Rape in South Africa is a daily occurrence. According to the 2015/2016 South African Police Service figures released in September last year, reported rape cases stood at 42,496. This does not include the unimaginable, alarming number of cases that go unreported, with many rape survivors deterred by the 8 percent conviction rate of rapists, or the notorious disregard of the SAPS towards sexual violence survivors.

“Fear of not being believed, or being told that what they survived does not actually amount to rape, means many survivors do not know they are entitled to access both justice and medical care to prevent unwanted pregnancies, HIV and other sexually transmitted diseases.”

In a report published by Doctors Without Borders (MSF) that profiled the sexual violence in Rustenburg, it was found that 95 percent of survivors did not tell a health professional of the incident, while only half were aware that HIV could be prevented after rape.

In another more recent study, MSF conducted a nationwide telephonic mapping of designated healthcare facilities to examine what healthcare gaps existed for survivors of sexual violence in South Africa.

According to the Department of Health, there are 265 public healthcare facilities across all provinces that should be providing medical and psychological care to survivors of sexual violence. Of the 265 designated facilities, 63 percent participated in an interview. It was found that only 26,7 percent of facilities provide the comprehensive package of care for survivors.

Only 27 percent reported access to a psychologist, raising concerns about the ripple effect of trauma and mental health issues throughout South African society.

Additionally, for young South African women, gender-based violence attributes to approximately 20-25 percent of new HIV infections. This is exacerbated by poor healthcare services for survivors. A woman, for example, who cannot access antiretrovirals after a rape is at risk of having her trauma revisited through her life.

Health-e’s Izwi Lami campaign provides a free and anonymous SMS service to survivors, allowing them to share their stories of survival, access counselling services and sign a petition calling for packages of care in all 24-hour healthcare facilities. Largely, it has brought rape survivors’ testimonies into the mainstream media conversation in an attempt to shatter the normalisation of rape – and its long-term health implications – across the country.