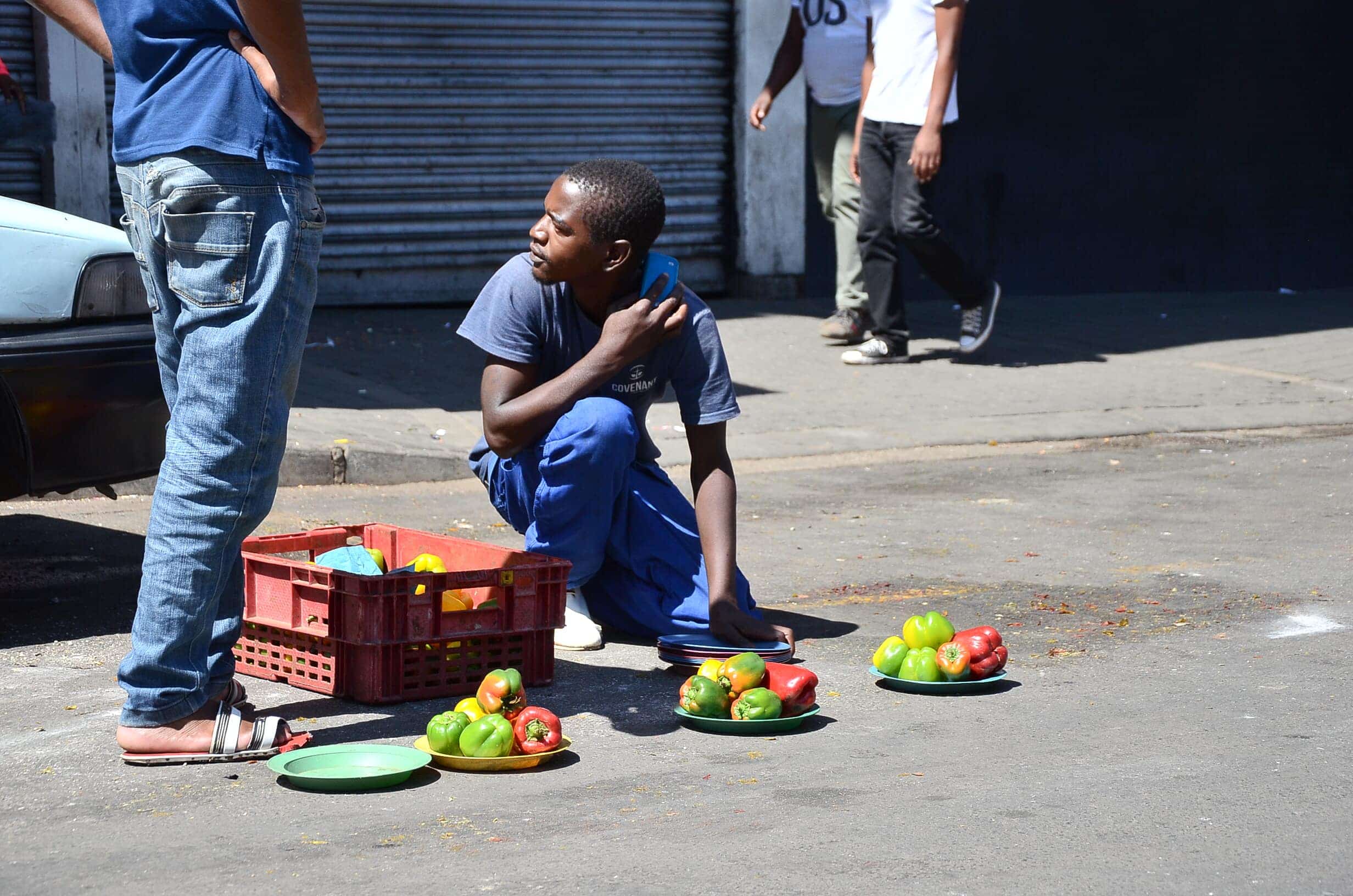 Hunger is driving violence and entrenching the social divides created by apartheid, as under-nourished children are unable to catch up to their peers.

“Lightning and thunder inside your stomach” is how Keabestwe Qhejong, a 16-year-old learner living in Mandela Squatter Camp in Soweto, describes the physical intensity of hunger.

“It makes that sound,” he says. “You just feel like this is not life. I can’t stay like this. I can’t live like this. I have to do something about this.”

Until recently, Keabetswe was one of the millions of South Africans going to bed hungry every night.

Although we are 24 years into a new democracy, political freedom has meant very little to those living through a nutritional crisis. Commentators are calling this a ticking time bomb, while activists are calling this “food apartheid”, as the inequality established by apartheid is being further entrenched by the food the haves and the have nots are able to afford every day.

“The first 1000 days from conception to two years is a window of opportunity and the only period in which we can address both physical and mental development as a child,” said Jay Naidoo, former trade unionist, ex-Cabinet minister and human rights activist.

“We miss that gap and no matter what we do beyond that, that child is permanently damaged.”

Keabetswe, and his identical twin brother, Kabelo, were used to sleeping and studying on empty stomachs. This was before they started getting daily meals from the African Children’s Feeding Scheme, a 70-year-old organisation that feeds over 14,500 children in Soweto daily.

His story aligns with the recent research of Daniela Casale using data from the National Income Dynamics Study (NIDS), which showed that children who were poorly nourished in the early years of their life routinely performed worse in school. The researchers noted that this could have a knock-on effect on their schooling and employment prospects late on in life.

“I believe that hunger is a cause of a lot of things like crime, and children not being able to go to university,” reflects Kabelo.

The crime Kabelo speaks of is the focal point of research conducted by Sonke Gender Justice in Diepsloot. From 2 500 interviews with violent men, 40% said that their odds of violence were reduced when they had access to food security.

One of the lead researchers, Mzwakhe Khumalo, said that the nexus of masculinity and hunger is a common theme in one of South Africa’s most violent communities:

“Men feeling that their masculinity is basically reduced to nothing, because then they are not able to meet immediate expectations of providing for themselves but also their families, (which) is often a pathway to drinking.”

Sheppard Dlamini was one of these men. Sitting outside in the alleyways between his home and his neighbours in Diepsloot, Sheppard tells the story of his former violent self.

“As a man you have to be a provider,” he said. “Sometimes I feel undermined because I can see the other people are providing necessities but I am just coming empty handed, or with an empty stomach. That gives me more pressure”

Dlamini’s wife eventually moved out with their twins. This, together with his work with Sonke and the Community Policing Forum, helped him to quit alcohol and tackle the violence that had become normalised in his community.

The link between hunger and violence are being explored both locally and internationally, from both a physiological and societal lens.

“There are two main ways in which children can be socialised or developed into violence,” said food security expert, Tracy Ledger. “The one is the physiological change in their brain (linked to malnutrition) which makes them more predisposed to violence, and that happens if the brains impulse control centre is compromised. The other is a constant exposure to violence.”

The cycle of violence is perpetuated by hunger, although individuals like Sheppard highlight that it is possible to disrupt this series of events.

“I like the children. But mine are not here. Just because of their father who was violent,” said Sheppard, an air of shame washing over his face. Despite this, he is driven to show his wife that he is a changed man.

Nearly 40km away from Diepsloot in Alexandra township, another outcome of the cost and accessibility of food plays out in Lucky Nkosi’s life. At the time of being interviewed, this 24-year-old mother of four was heavily pregnant and weighed 120kg. Her family sat nearby eating kotas – a quarter loaf of bread filled with polony and chips.

“The doctors have warned me that I need to lose weight,” laughed Nkosi nervously. But eating healthy foods and attending a gym were not options for Nkosi, who survives off child support grants after she lost her job at a cinema.

“They told me I am going to have a heart disease and it is going to be difficult for me in labour, so I may actually lose my life.”

With the highest obesity rates in sub-saharan Africa, Nkosi’s story is not unique. Her complaints around the cost of food, and the impact this may have on her unborn child speaks to a general nutritional crisis across the country. “The foods (the doctor recommended) are too expensive…They told me the baby will need pap but not too much pap so I have to limit everything,” she said, exasperation playing across her face.

Dr Tim De Maayer, a Paediatric Gastroenterologist, sees both mothers and children impacted by poor nutrition. “Our diet has changed,” said De Maayer. “We eat far more convenience food. We eat far more processed food, far more sugar. Lots of sugary drinks and a lot less vegetables and fruits. There is a lot of research recently that has shown that malnutrition in first two years of life impacts on later diseases in adulthood: the presence of obesity, diabetes and even things like cognitive capacity. This all impacts our ability to be productive members of society.”

Sugary drinks are a huge part of South Africa’s health crisis. Nine and 10-year-olds in South Africa are among the highest consumers of sugary drinks in the world, after the US. It is not unrelated that there are 10,000 new diabetes cases being diagnosed every month in the country.

“I think that’s the first thing I tell parents when they have a problem with a child that is overweight,” said De Maayer. “Cut out sugary drinks. Replacing these with water does a huge amount for cutting our excessive sugar intake. I am a big proponent of the sugar tax.”

For Nkosi, making the difficult and often expensive lifestyle change could mean the difference between life and death.

The stories of Nkosi, Dlamini and the Qhejong twins are microcosms of the wider nutritional crisis affecting millions of South Africans across the country in different way. The long-term impacts of not dealing with the food crisis in this country can no longer be ignored.

“Malnutrition sits at the heart of some of the most serious social and economic issues that we have to overcome,” said Ledger. “It is malnutrition which means that children cannot benefit from education, which means that they cannot graduate into productive lives and economically valuable lives. It is malnutrition that makes people much more likely to have diseases like diabetes and hypertension later in life… Then there’s the fact of the violence. Every single one of us stands to lose from living in a such a violent society, not just individual victims of that violence. This is the issue with nutrition in South Africa.”