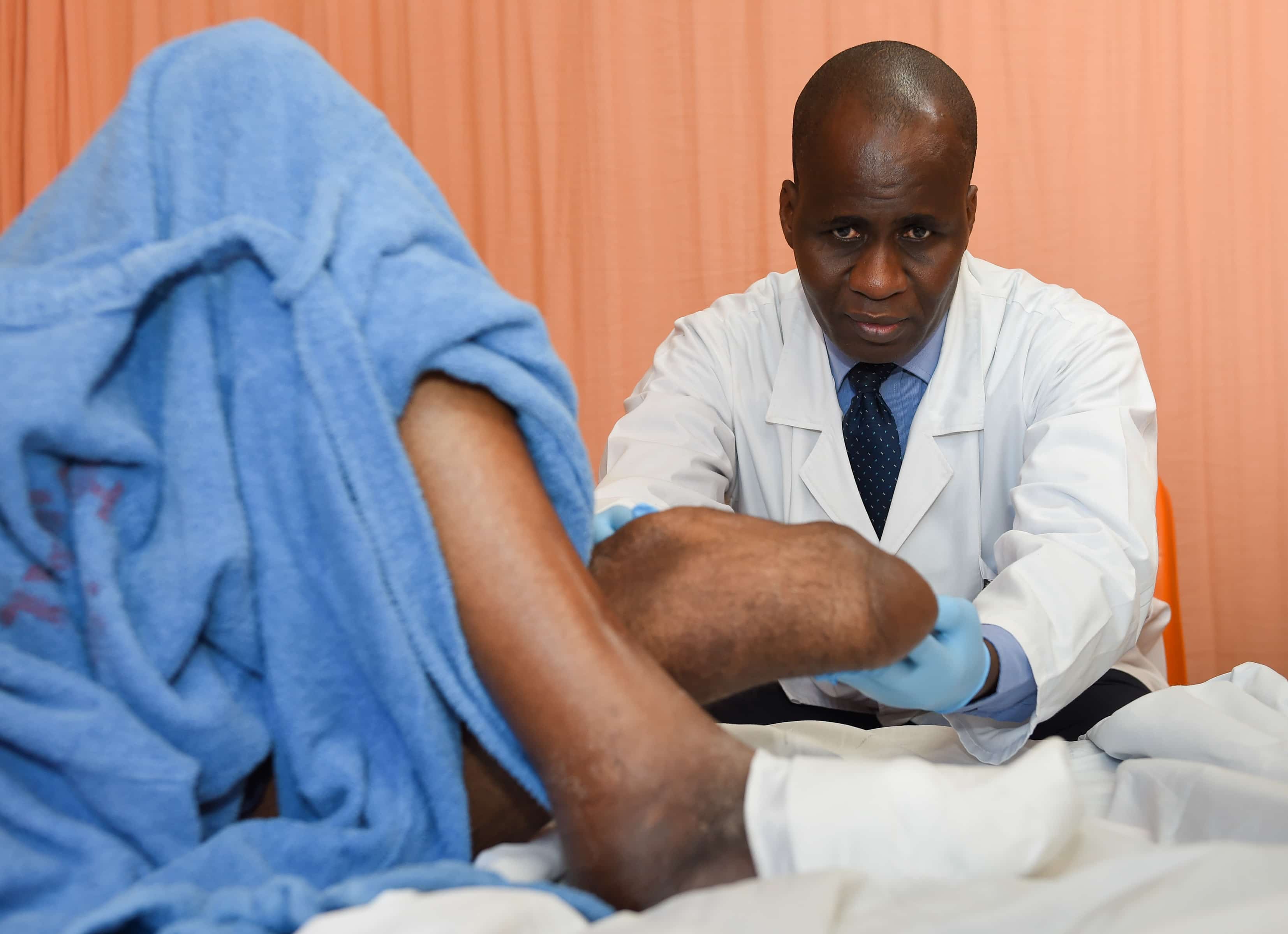 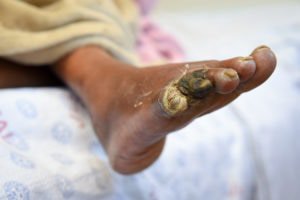 Three, four, five amputations, months in hospital then death – this is the cycle that keeps repeating itself in the Johannesburg surgical wards overseen by Professor Thifheli Luvhengo,.

“We are being overwhelmed by diabetes. As a surgeon, this is a cry for help. The epidemic is so huge. We need help not to treat diabetes, but to prevent it,” says a quietly desperate Luvhengo, chief of surgery at Charlotte Maxeke Academic Hospital.

“It is rare that a patient with diabetic foot sepsis gets out of hospital within six weeks. These patients end up competing with patients with cancers, people who have been in car accidents and other surgical emergency for limited number of beds available, as they stay long in hospital. ”

At any given time, around a third of the 80 patients in the hospital’s three surgical wards will be occupied by patients who have complications due to diabetes. But the situation at the 14 smaller Gauteng hospitals that refer patients to Charlotte Maxeke is far worse, says Luvhengo. There, he estimates that 60 to 70 percent of surgical patients are diabetic.

“They come in late with sepsis, if they are lucky to get a space in tertiary hospitals; usually infection of the toe. We amputate the toe. The infection spreads. Within three days, we have to amputate the foot. Then, below the knee. Then, above the knee. One third of these patients, minimum, are going to die in hospital within months to a year.”

Those that don’t die go home to very different lives with much-reduced mobility.

“There are no prostheses [artificial limbs] so most of the patients never go back to work,” says Luvhengo. “And these are not old people. These are not 50- and 60-year-olds. Many are in their forties. They are mostly poor patients from townships and rural areas.”

Diabetes can cause blood vessels to narrow and this reduces the flow of blood to legs and feet. It can also cause nerve damage so that some diabetics don’t feel pain and don’t realize that they have a cut or any injury on their foot. These wounds can get infected before patients even notice. Gangrene (death of the tissue) and infection of the bone are common.

“If the blood flow is poor, the infection spreads quickly,” explains Luvhengo. “There are different infectious organisms which collaborate to cause damage. One destroys the tissues. Another thrives in rotting tissues. Antibiotics are either not strong enough or are not able to reach poorly perfused or dead tissue. So we have to amputate.

“We start with what we call guillotine amputation. We cut the bone and the meat and muscles. But we leave it open and dress it. We don’t stitch immediately in case there are complications due to residual infection. Then we shorten the bone and cover the skin. But it invariably becomes septic again.”

Sadly, the lack of surgical beds also means that there is no room for diabetic patients at the early stages of infection – worsening their chances of escaping the horrifying spiral of amputations. 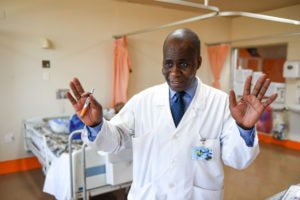 Diabetes is also a major cause of blindness, kidney failure, heart attacks and strokes, says endocrinologist Dr Sundeep Ruder, who deals with the complications of diabetes every day.

Around 9.5 percent of South Africans over the age of 15 have diabetes – about 5,3 million people, yet almost half are unaware of this, according to the Society for Endocrinology, Metabolism and Diabetes of South Africa (SEMDSA).

[quote float = right]People are no longer eating ‘food’, they are eating ‘food like products’ which do not have any nutritional value.”

But Ruder is emphatic that the condition is completely preventable and can be managed relatively easily if it is detected early, treated properly and patients are prepared to change their diets, exercise and manage stress.

“Excessive calorie consumption and sedentary lifestyles within stressful environments are the main contributors to the development of diabetes,” said Ruder, who is also a spokesperson for the Healthy Living Alliance (HEALA).

“People are no longer eating ‘food’, they are eating ‘food like products’ which do not have any nutritional value,” said Ruder.

Meanwhile, Luvhengo speaks of “a factory making diabetic children”, referring to the sugary drinks parents give to their kids priming them to become diabetic within 10 years.

South Africans’ consumption of sugary drinks increased by 68 percent between 1999 and 2012, with nine- and 10-year-olds among the highest consumers of sugary drinks in the world, beaten only by kids in the USA, according to research.

“The amount of sugar in a can of Coke is like giving a child two lunches. The pancreas secrets insulin to fight the high sugar and the excess is converted to fat. We are becoming fatter and fatter and then we become diabetic,” says Luvhengo.

Obese people are up to 80 times more likely to develop type 2 diabetes than those with a normal body-mass index of less than 22. The reasons are complicated. One is that fat cells make the body less sensitive to insulin, which then disrupts the processing of sugar.

[quote float = right]The cost of treating diagnosed diabetics is approximately R3.6-billion for this year alone, according to our preliminary research.”

Earlier this year, StatsSA revealed that in 2015, diabetes had overtaken tuberculosis as the biggest killer of South African women – perhaps not surprisingly when 70 percent of women and 40 percent of men are overweight.

Despite the surge in diabetes cases, government’s response has been sluggish – with costly consequences.

“The cost of treating diagnosed diabetics is approximately R3.6-billion for this year alone, according to our preliminary research which is not yet published,” says Professor Karen Hofman, Director of PRICELESS SA, a health economic policy research unit at Wits University.

“Around 60 percent of diabetic cases are undiagnosed. If diagnosed and undiagnosed cases are considered, diabetes will cost the country approximately R8.7bn this year,” says Hofman. 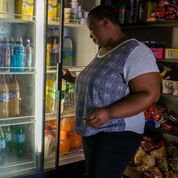 By 2030, the cost would have climbed to R11-billion if the prevalence rate remains at 7 percent of the population. But if no preventive measures are put in place and new cases grow by 35 percent, the cost will balloon to R56-billion.

“Our healthcare system is already overburdened and the country cannot afford these costs,” says Hofman. “We are facing a crisis with huge economic costs and we cannot afford to wait in implementing population wide preventive interventions like a tax on sugary drinks.”

The tax, initially supposed to be implemented on 1 April, is still languishing in the Parliament and has been watered down from a 20- to 10 percent tax on a can of Coke after massive opposition from beverage companies and the sugar industry. However, Parliament’s joint finance and health committees are expected to decide on the tax later this month, after which it will be sent to the National Assembly to be voted on.

In the meantime, those sipping on sugary drinks are oblivious to the fact that they may be taking the first steps down a painful road that could end in Professor Luvhengo’s surgical wards. – Health-e News.