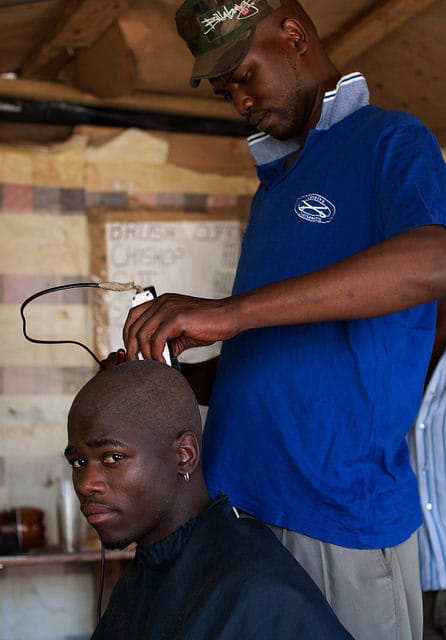 Two recent studies conducted by the University of Cape Town and published in the latest SA Medical Journal have found significant contamination of hair clippers with blood and blood-borne viruses, especially Hepatitis B.

The report has warned clients of the risks of inadequately sterilised barber equipment, particularly those who opt for the clean-shaved haircut known colloquially as a ‘chiskop’.

Barbershops are common in townships and place regularly frequented by men wanting fresh haircuts. But now that attending a barber has been associated with risks, clients are being encouraged to bring their own hair clippers, especially if they want a chiskop cut.

The research, which was conducted in Cape Town, found that nearly half of the clippers used in barbershops tested positive for traces of blood. South Africa currently has the highest number of people living with HIV/AIDS in the world, meaning that people infected with the virus can infect others through clippers. Studies found that the blades of hair clippers tend to pick up blood from pimples on the scalp, and this same blood may infect other clients if it comes from someone with Hepatitis B.

With many black men in South Africa opting for chiskop is their preferred haircut,  the risks are high and could pose a major health problem.

Kgotso Sebolayi, a local resident in Ikageng, North West province, says he has been using his own clippers for over a decade. He started doing this after developing a fear of contracting an infection after witnessing another client bleeding after a trim at the barbershop.

“I always knew about this. Now I shave my hair in a chiskop weekly with my own clippers,” he said.

According to the research, haircut-associated bleeding affects at least one-quarter of African men who shave their heads.

But an Ikageng based barber rejected the findings, saying he believes the findings are misleading.

Searchmore Mkize (43) said “Honestly I don’t believe there is such a thing. I have been doing this for over 20 years. If a clipper has traces of blood, the blood cells would not survive the time it takes for me to attend to my next client. Besides, we rinse our clippers with spirits before attending the next  client.”

Searchmore Mkize (43) said “Honestly I don’t believe there is such a thing. I have been doing this for over 20 years. If a clipper has traces of blood, the blood cells would not survive the time it takes for me to attend to my next client.

The research argued that even the use of these methods to disinfect clippers may not be effective enough because ethyl alcohol and methyl alcohol aren’t agents that destroy viruses.

“The simple message is, if you have a chiskop haircut, make sure your barber uses a steriliser or (clearly labeled) antiviral spray on clippers. Methylated spirit is not enough. Otherwise, take your own clippers for him to use. Until further scientific evidence is available, it may be prudent to promote (sterilisation and/or) individual-clipper-ownership for chiskop,” the research stated.