Martha Marumo, an inmate at Kgosi Mampuru II Correctional Centre in Pretoria, speaking to President Cyril Ramaphosa. Marumo is serving a life sentence for murdering her husband as a way to escape his abuse. (Photo credit: Pontsho Pilane)

Could this be the end of government’s “one stop” centres’ financial woes?

TSHWANE – Lack of funding will no longer stand in the way of ensuring the doors of South Africa’s 55 Thuthuzela Care Centres remain open as government pledges to provide the much needed financial support.

“Where these centres aren’t working optimally, we would like to hear about it. If it’s a shortage of money we will make money available for them,” said President Ramaphosa as he addressed delegates at the National Gender-Based Violence and Femicide Summit in Pretoria on Thursday.

The summit was as a result of 24 demands handed over to Ramaphosa during the nationwide #TotalShutdown marches in August. His announcement was welcomed with cheering from delegates — especially those who participated in the marches.
Thuthuzela Care Centres provide rape survivors with services such as counselling, HIV tests and treatment, legal support as well as rape kits for the collection of evidence that could be used in court should survivors choose to open cases. For years, these facilities have been on the brink of shutting down due to lack of funding. According to a 2016 audit of the centres, the current funding environment is “damaging and does not lead to trust between the facilities and victims”.

Services such as counselling — that often operate outside of working hours — largely depend on funding from the international health financing organisation Global Fund to Fight Aids, Tuberculosis and Malaria.

“Thuthuzela Care Centres… aim to reduce secondary victimisation, improve conviction rates and reduce the cycle time for finalisation of cases. We agree with the demand that we must continuously ensure that lay counsellors at these centres undergo ongoing training to deal with the needs of victims of violence,” Ramaphosa said.

Providing resources and filling vacant posts at Thuthuzela Care Centres was also one of the demands of the #TotalShutdown marches.

Ramaphosa’s commitment was made just in time to save some the TCCs which will run out of funding in March 2019, says Sharon Kouta, Gender-based Violence Specialist at the networking HIV and AIDS Community of Southern Africa (NACOSA).

“This is one of the biggest victories because services for rape survivors that these organisations are providing are absolutely essential. At the moment we’re worried about what will happen to the centres because the non-governmental organisations will
not be able to do this on their own.”

NACOSA is currently meeting with provincial government departments deliberating on how to keep the doors of Thuthukela Care Centres open. “This is their [provincial departments] responsibility and with this announcement we can go to them and say that the President has committed to making a plan,” Kouta explained.

Meanwhile, some activists have decided not to attend the summit. The Gauteng Community Health Care Forum picketed outside the venue, accusing government of not being “pro-working class”.

“The voices of the people are not heard. We’re concerned that our participation might be simply a way to swell numbers, and give the appearance of inclusivity when agreements being presented to the Summit have already been fixed by middle class
women organisations and the government,” said Zoleka Mbotshelwa, the organisation’s Chairperson. 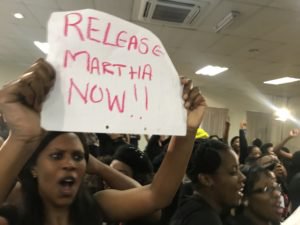 However, it was the harrowing experiences of gender-based violence survivors that eclipsed the summit, as women from all walks of life share their testimonies. In 2003, Martha Marumo said goodbye to her four-year old son. This would be the last time he sees his mother as a free woman. Her son is now 19 years old, and he still asks “Mama, when are you coming home?”

Marumo is serving a life sentence at Kgosi Mampuru II Correctional Centre in Pretoria for the murder of her husband. “I am a woman who was abused — who decided to take the law into her own hands,” she says. “I killed my husband.” Marumo says she was assaulted by her husband even during her pregnancy, but never opened a case. The couple would sometimes end up at the police station, she remembers, where her husband would tell officers that it was simply “a family matter”. After years of abuse, including being coerced into unprotected sex by her husband, Marumo murdered him.

Her testimony was one of about ten stories told. At the end of her panel she was escorted back to prison as activists demanded Ramaphosa pardon her of her conviction. — Health-e News.