Home » Diabetes: Your leg or your life 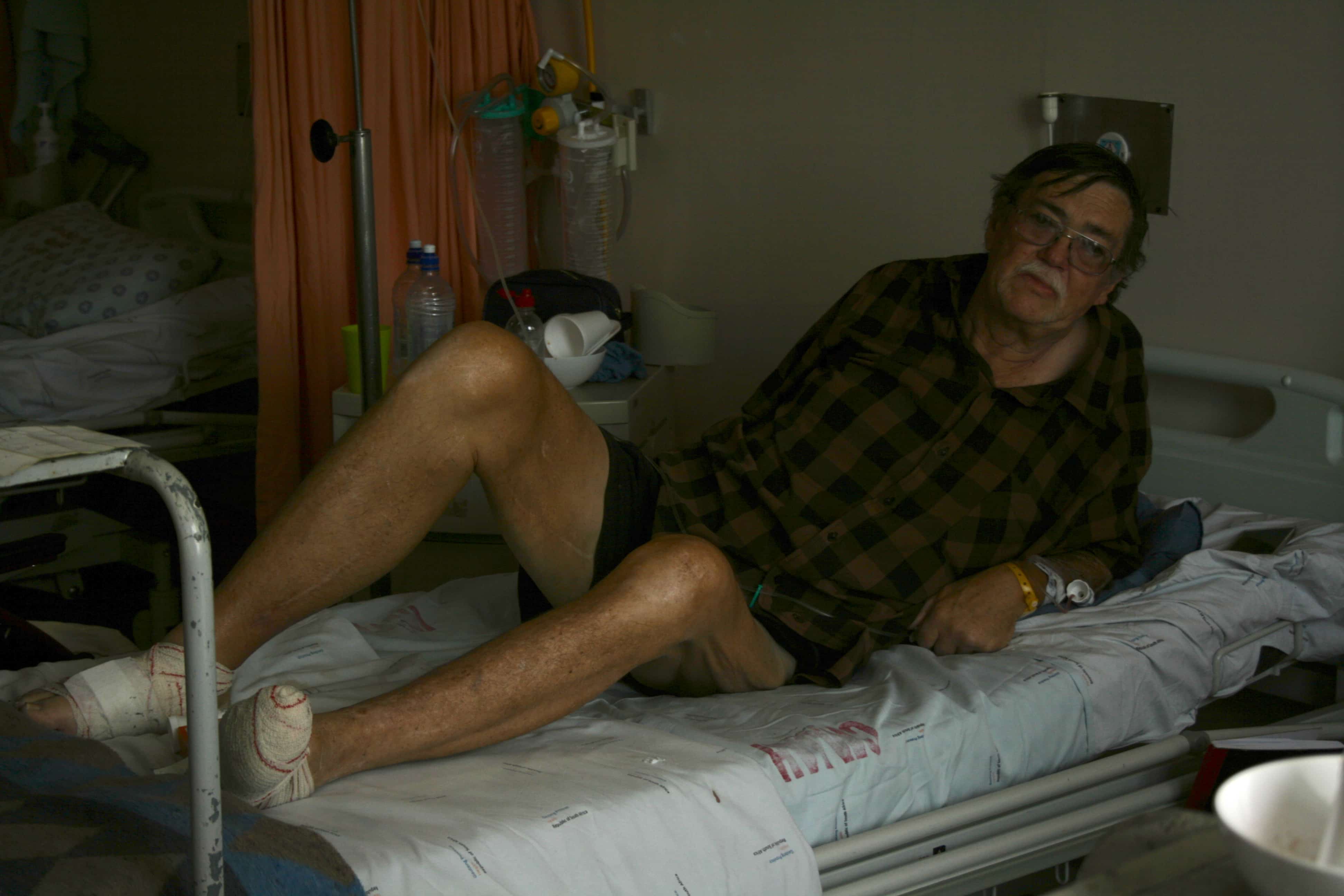 It is one of our fastest-growing epidemics. But managing diabetes is complicated when diagnosed late – the main problem for most South Africans. HEALTH-E NEWS’ Amy Green spends time in a surgical ward where people living with complications from the condition often have to choose between amputation and death. And once they have lost a limb, their chances of getting a prosthetic one in the public sector is virtually zero.

“One morning, it was soon after my husband passed away, and all I could feel was this pain in my foot. It was very sore,” says 70-year-old Elizabeth Harms, seated in a wheelchair next to her bed at Charlotte Maxeke Johannesburg Academic Hospital.

Diagnosed with diabetes 18 years ago, Harms said that in May this year she suffered one of the most severe complications of the disease: amputation.

“I was very scared. The doctors did a surgery to try save my leg and I prayed ‘Lord please, please, help me’,” she says.

But the operation came too late and days later doctors told Harems they needed to amputate her left leg. There was no blood flow to the limb which had become infected, an infection that could rapidly spread through her body and claim her life.

Diabetes slows the flow of blood to extremities, which brings oxygen to help wounds or ulcers heal. Infections that are minor in a person without the condition are serious and can spread rapidly in those living with diabetes.

Looking out of the hospital window, tears well up in Harms’ eyes. The mother of four gently wipes them away. “I remember my daughter saying to me, ‘We love you as you are and not because you haven’t got a limb,” she says.

A few months later, Harms was back at the hospital, her right foot had become infected. In October, Harms’ remaining leg was amputated.

“After the first leg was cut off I didn’t have a wheel chair, just a walker, so I used to jump around on the one leg to go to the toilet or whatever and all that jumping caused a crack on my other foot,” she says, lightly touching the fresh bandage covering her right thigh.

According to Professor Thifheli Luvhengo, Clinical Head of the Department of Surgery at Charlotte Maxeke, South Africa’s surgery wards have turned into “factories where we just chop off legs”.

He said that there is little support for patients who have lost a foot or leg and who need help to prevent the loss of the other.

“You chop the leg, send them home, and within a year they are back and you have to chop the other one,” he says.

In 2009, diabetes caused an estimated 8000 new cases of blindness and 2000 new amputations in South Africa, according to a 2013 study published in the journal Global Health Action.

In less than a decade, the situation has escalated dramatically. Earlier this month, KwaZulu-Natal MEC for health Dr Sibongiseni Dhlomo revealed that six amputations occur every single day – 2500 a year – in his province alone.

No national data exists to quantify the rates of diabetes-related amputations, but a quick look at hospital surgery wards provides an indication.

“About 50 percent of the diabetic patients in hospital have had some form of amputation,” Professor Abdool Carrim, Head of Vascular Surgery at Charlotte Maxeke, told Health-e News.

While this debilitating diabetes-related complication can be prevented, he says that many patients are diagnosed too late.

According to the International Diabetes Federation, around half of people in the world with diabetes don’t know that they have the condition. But in Africa is the highest, almost 70 percent of people living with diabetes are undiagnosed.

The South African Department of Health conservatively estimates that one out of three people with diabetes don’t know they have the condition and about a quarter of newly diagnosed patients have already developed complications.

According to Carrim, diabetic patients need to be seen by a host of different health professionals to manage their disease and to help prevent severe consequences like limb-loss.

At his hospital, physiotherapists, a podiatrist, social workers, psychologists, dieticians, occupational therapists, doctors and nurses work together to assist these patients, but more often than not, this is after a limb has been lost.

The entire health sector, and especially patients, would benefit from access to such multi-disciplinary teams at primary and secondary level  before they end up in tertiary hospitals like Chalotte Maxeke, says Carrim.

More than 10 years ago, it was estimated that every 30 seconds a lower limb was amputated due to diabetes around the world, according to a study published in the Lancet medical journal.

“When this figure came out, it shocked the diabetes community. We struggled to accept it as the truth,” the International Diabetes Federation’s Dr Belma Malanda told Health-e News.

According to Malanda, “recent figures coming out of African countries and other low-income countries show that the amputation rates are even higher than this”.

But, he says, there are simple low-cost initiatives that should be implemented in low-resource settings. In 2012, a project called the Diabetes Africa Foot Initiative was launched in 10 African countries: Cameroon, Ghana, Guinea, Kenya, Madagascar, Republic of Congo, Rwanda, Senegal, Tanzania and Uganda.

Spearheaded by the International Diabetes Federation, pharmaceutical company Sanofi and a number of universities, the programme aims to equip health workers with skills to screen diabetic patients for foot problems to identify complications early and prevent the catastrophic amputations.

Head of Physiotherapy at Charlotte Maxeke, Tshifhiwa Mukhelu, says that this is something sorely needed in South Africa. “If you ask nurses in clinics if they have done foot screening they will say they have but there is no evidence that this is happening,” she says.

According to Malamba, some African countries have programmes where diabetes patients themselves are trained to screen each other for foot problems.

“This has proved incredibly helpful because patients don’t need to travel to clinics, which are often far from where they live. They can go to their neighbour and give feedback to each other more regularly than what is possible through the healthcare system. And this is costs absolutely nothing,” says Malamba.

Anschen Venter, a physiotherapist at Charlotte Maxeke, international research has shown that if a patient receives a prosthetic limb after amputation the chances of a second amputation decline significantly.

But Carrim, Luvhengo, Venter and Mukhelu says that virtually no  diabetic patients in the public health sector ever receive a prosthesis.

Mukhelo says that there are only four centres in the province’s public sector able to provide prostheses and that patients they have referred to Chris Hani Baragwanath Hospital, which has such a centre, are on such a long waiting list that the earliest date they can be seen is June 2019.

“By that time, their other leg will already be amputated,” she says.

According to Carrim, the problem is made worse because of the misperception in communities that, if a diabetic patient goes to hospital with a foot problem, they will automatically lose their leg.

“These days we have good ways to increase the blood flow to compromised limbs,” he says.

These include surgeries to bypass blocked arteries as well as non-operative measures to increase circulation.

But, out of fear of amputation, many patients delay going to hospital and miss out on the chance of receiving such therapies.

Hesina Chunara, 57, had one of these interventions a few years back that saved her leg. Called an angioplasty, the minimally invasive procedure widens narrow or obstructed arteries and veins.

She is back at Charlotte Maxeke Hospital because her other foot has become painful and doctors are monitoring it before deciding whether to perform another procedure.

Malanda says an amputation can be devastating to patients as many can no longer work or even get to the clinics for check-ups.

Carrim believes many amputations could be averted if education and awareness initiatives were ramped up – even simple measures such as showing a patient how to cut their toenails safely so that they don’t cut themselves as a small wound on a toe for a person with diabetes can quickly turn into an infection, develop gangrene, and lead to the loss of a foot or leg.

In the ward next door to Harms and Chunara, 66-year-old Johan Fourie lies on his side on top of the sheets of his hospital bed.  He has spent the last three months in and out of hospital with several diabetes-related complications.

The self-professed “tough” farmer from Krugersdorp is waiting for doctors to tell him whether or not they need to amputate his swollen and infected right foot. The prospect terrifies him.

“You know, I had a temper when I was younger and I thought that I would die from a heart-attack because I got too angry,” he says. “But ending life like this, it was the last thing I expected.”

He doesn’t look anywhere close to angry. Behind his thick glasses, his large brown eyes look profoundly sad. Although he tried to swallow them, tears start to roll slowly down his cheeks.

“Maybe it’s better you don’t know how you are going to die. Maybe a heart attack would have been better and death would come as a surprise.”