Home » News Articles » Innovating in the fight against trafficking 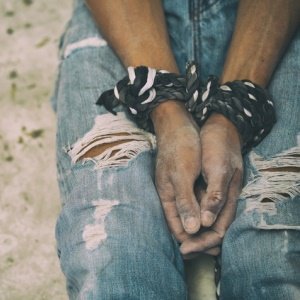 From the simple use of cellphones, to the galactic potential of satellites, innovators and activists are hot on the tracks of traffickers worldwide.

Innovating in the fight against trafficking

It was a simple idea, involving only her personal cellphone and the local radio station. But it was an idea that would save 70 Ugandan women from the hands of traffickers in the few short months that the idea was launched.

Hellen Lunkuse, the founder of the Rape Hurts organisation – an NGO that fights for the rights of abused and trafficked women in Eastern Uganda – wanted to focus on intervention of trafficking rather than just rehabilitation of victims. She went to her local radio station, Busoga Radio, and read out her personal cellphone number and the number of one of her colleagues. She encouraged women to call them – women who had been offered jobs elsewhere and needed advice on whether the things they had been promised were legitimate.

“We can receive up to 50 calls a day. We have saved 70 women from trafficking in the past six months,” says Lunkuse in London at the Trust Conference – an annual conference run by the Thomson Reuters Foundation that brings together activists, innovators, journalists and researchers fighting trafficking.

“We give the women alternative ideas on income creation. We show them photos and videos of women we have saved from trafficking so they understand the risks involved.” Lunkuse has had 400 students roll through her vocational training school. One of these is Millie Racquel, who was rescued from trafficking and taught sewing skills. She is now a successful fashion designer in Uganda. Financial independence, says Lunkuse, means Ugandan women do not need a man to speak on their behalf. They become less susceptible to the promises of traffickers because they have options.

The Trust conference bought together hundreds of innovators like Lunkuse. One of them included Andrew Zolli, the VP of Global Impact Initiatives, Planet – a geospatial imagining organization using the world’s largest constellation of Earth-observing satellites in history. These satellite images are being used to better understand myriad human rights and environmental issues, including anti-trafficking interventions.

Zolli brought up a satellite image of legal and illegal gold mining in Peru on the screen projected to the audience. A comparison over time shows the sliver of brown sand in the illegal mine image becoming wider, spreading like a thick river between the green trees. “The Peruvian government were able to use the contrast of these images to dismantle the illegal mine,” says Zolli. “We are essentially using space to help life on earth.”

Planet works closely with the Rights Lab Slavery Observatory – a geospatial slavery observatory. Dr Doreen Boyd – a Professor and reader in Earth Observation at Nottingham University – believes that “one third of slavery is detectable from space.” These images can also detect flood-risk areas, crop changes, brick kiln labour, cotton harvesting season, types of machinery, and even buses bringing in slave workers. These are all puzzle pieces in revealing larger trafficking networks.

But as Zolli and Boyd reflected: “These pixels are useless unless we collaborate together.”

Collaboration was also the impetus behind the interactive map that was envisaged at the anti-trafficking workshop run by Thomson Reuters Foundation and the Global Leadership Academy in Nairobi in June and again in London in November. This “living map” is essentially an open portal for trafficking testimonies, resources and data linked to trafficking across the globe. In partnership with Health-e News and Code for Africa, participants of the lab began to send in data from their countries, in an attempt to humanise the numbers, and to paint a real picture of what trafficking looks like around the world. It is an invitation to the world to help populate the map, through this simple online form.

This intention is that activists, researchers and journalists working in trafficking can use this data to better understand the intricacies of trafficking in their countries, and that potential victims can empower themselves through this information too.

Other examples of simple yet impactful means of innovating include the work of photojournalist Jekaterina Saveljeva in the creation of femLENS – a free documentary photography workshop run for marginalized women across the world so that they can change the portrayal of their own stories using cameras/mobile phones. femLENS trains the women and then assists in exhibitions of their work.  Recently Halima al-Haj, a Syrian refugee, won $5000 in a photography competition after attending a femLENS workshop. Saveljeva has recently run a workshop with women at risk of trafficking in Ukraine.

The conference did not shy away from the horrors of trafficking realities either, careful to tell a truthful story of what these innovations are up against. As mentioned by Luis C deBaca – the former US ambassador-at-large to Monitor & Combat Trafficking – “technology is not a synonym for innovation”. Tools, both complex and simple, can be used in myriad ways fuelled by the agenda of whoever is steering the ship.

deBaca pointed out that the simple invention of the printing press meant Uncle Tom’s cabin could be printed in 1852, an anti-slavery novel that would fuel the abolitionist fire and lay the groundwork for the civil war in the United States.

It is harrowing to know that 166 years later, the fight against slavery continues. Only now traffickers have changed their tools, as should we.

Kim Harrisberg was in London for the Unveil the Hidden Presence Lab run by Thomson Reuters and GIZ. This lab brought journalists, activists and policy planners together to tackle human trafficking issues worldwide.

An edited version of this article was published by News24.