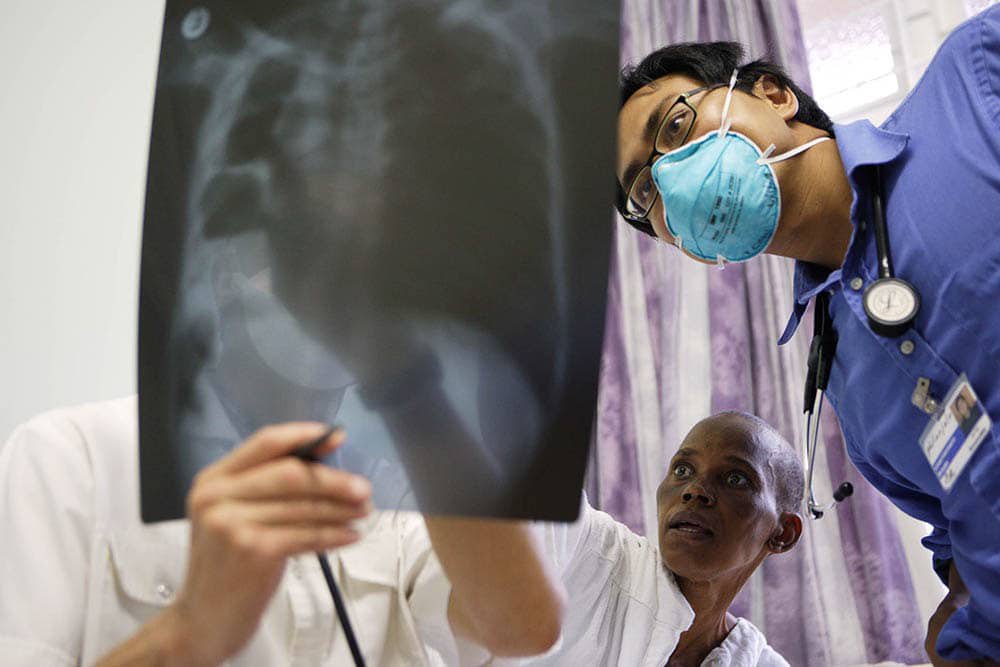 The world is one step closer to ending the deadliest form of the deadliest infectious disease known to man: extensively drug-resistant tuberculosis (XDR-TB).

A new, and much shorter, drug combination was this week approved by the US’ medicine regulator, changing the course of TB history.

Although South African patients were the first to use the drug, creating the evidence on which this decision was based, there is a concern that our citizens will have to wait longer than those in developed countries to benefit from it.

In 2013 Tsholofelo Msimango was 19-years-old. Although from a poor background, the teenager was buoyed by hope, optimism and ambition and had just begun her studies in hospitality and catering at Springs College on the east rand funded by a bursary.

She went to a local clinic and was diagnosed with multidrug-resistant TB (MDR-TB); a form of the disease that is resistant to two of the most commonly used anti-TB drugs. Back then, treatment was gruelling. Msimango began taking a toxic regimen of 17 pills a day on top of a painful daily injection. The injections, which cause permanent deafness in up to a third of patients, were prescribed for six months but she was told she would have to take the pills for about two years.

“Two weeks after starting treatment I started experiencing side-effects. It was very bad. I couldn’t even eat properly. When I did manage to eat, I would just vomit my food. I didn’t have the energy to do anything. All I could manage to do was lie on the couch. I felt powerless,” the now 25-year-old told Health-e News.

As a result, she dropped out of school and lost her bursary and her only shot at tertiary education.

Four months in, she couldn’t take it anymore and pretended to take her medication under the watch of her family but secretly hid the pills. Within a few weeks, she started to feel better but a couple of months later the disease returned with force.

She went back to the clinic where she was told she “was a lost cause” because she defaulted on her treatment but was placed back on the toxic mix of drugs.

“After two months I was feeling even worse than before and we called an ambulance to rush me to hospital,” she said.

The TB bacteria had become resistant to the drugs she was taking as a result of stopping the medication before she was supposed to. Although this is the primary route through which resistance develops, studies have found that more than half of drug-resistant TB in South Africa is as a result of resistant germs spread through the air from infected individuals, many of whom have never had TB or taken an anti-TB drug in their life.

Msimango was diagnosed with XDR-TB, a highly deadly form of the disease that is resistant to at least four of the most commonly used anti-TB drugs, and was taken to a specialist Sizwe Tropical Diseases Hospital.

“I was so afraid because the sisters at the clinic said that people who go to that hospital don’t come back. I thought I was going there to die,” she said.

Eight months of gruelling treatment later, the young woman was not feeling better and had lost hope.

Her doctor asked if she would like to try an experimental treatment being studied in a clinical trial. It would only take six months, there would be no injections and instead of taking 23 pills a day she would only have to take 23 a week. Msimango agreed at once, wondering what the catch was.

Six months later, and with the only side-effect she experienced being three days of diarrhoea, the young woman was cured and could return to her home in Tsakane.

Wednesday’s Federal Drug Authority (FDA) approval of this regimen, called BPaL, is a “watershed moment” in the fight against the disease, which is still the leading infectious disease killer worldwide, according to Dr Francesca Conradie, who was one of the lead investigators in the clinical trial.

But, even before this FDA announcement, much has changed since Msimango fell ill in 2013. At that time, “if you treated 10 people, you could only hope that three would be cured”, according to Dr Morounfolu Olugbosi, who heads up Clinical Development at the TB Alliance, the international non-profit organisation responsible for the development of BPaL and the clinical trial in which it was studied: NixTB.

However, in recent years other new drugs have become available – particularly in South Africa – namely the blockbuster drug bedaquiline as well as delamanid which has eliminated the use of the deafness-causing injectable medicines.

According to Dr Norbert Ndjeka, who is in charge of drug-resistant TB at the National Department of Health, while only 19 percent of XDR-TB patients were cured in 2012, 67 percent of those with access to bedaquiline were cured in 2016. But an average of 11 percent of patients drop out of treatment due to its long duration (18 months) and intolerable side-effects.

Nine out of 10 patients were cured in the NixTB trial, after only six months of treatment with just three drugs: bedaquiline, pretomanid and linezolid which make up BPaL.

Clinicians like Conradie are excited about this new option because it is hoped that the drastically shorter duration of treatment and the lower side-effect profile will translate into much lower drop-out rates.

However, activists like Lindsay McKenna, from the US Treatment Action Group, are concerned that the FDA’s decision was hasty and based on too little evidence.

“We are concerned that this regimen, and specifically the new agent pretomanid, was only studied in a small group of 109 patients in the NixTB trial, which goes against the usually-stringent requirements of most new medicines,” she said.

Regardless, BPaL marks the first ever standardised regimen of care for XDR-TB patients and has been welcomed by many.

“For too long, patients with drug-resistant TB have had to endure horrible, painful, long therapies. I am thrilled that we now have new TB drugs and regimens that can change this reality. A six-month, all-oral treatment for XDR-TB would be an incredible advance over the current situation, and I hope that patients won’t need to wait for too long to access such innovations,” said Professor Madhukar Pai from McGill University in Montreal.

And in South Africa?

But what does this decision, made by the US medicine regulator, mean for South Africa?

“Most of the research has been done in South Africa and clearly we would like to be either the first country, or among the first, to offer it to patients. But the issue is cost. Because the numbers of patients with XDR-TB are small, around 1 000 a year, it would be hard to negotiate price reductions based on large numbers,” said National Department of Health deputy director general Dr Yogan Pillay.

He said that the department will meet with the stakeholders later this month to discuss a clinical access programme for the BPaL regimen for new MDR-TB patients (and possible XDR-TB patients too), of which there are over 10 000 in South Africa a year.

This arrangement would potentially give the country access to the drugs for free in order to gather data on whether the BPaL regimen is a better option for MDR-TB as well as XDR-TB (the FDA’s approval is only for XDR-TB).

Yet the concern is this might leave those most in need, patients with XDR-TB, without access to BPaL in the very near future.

But Pillay said his department has urged Mylan, the manufacturer of pretomanid, to begin the registration process with local medicine regulator the South African Health Products Regulatory Authority with haste.

Ndjeka said that, even in the best case scenario, this process could take up to 18 months.

Meanwhile Msimango, now 25-years-old, has this year given birth to her first child: a baby boy.

She said: “If my boy had to get XDR-TB I would hope he would be treated with the NixTB drugs like me. If he only had access to the old treatment, I would be very afraid.” – Health-e News

An edited version of this story was first published in Health24.