Home » News Articles » #NHIPublicHearings: Four down, five to go, what have we learned so far? 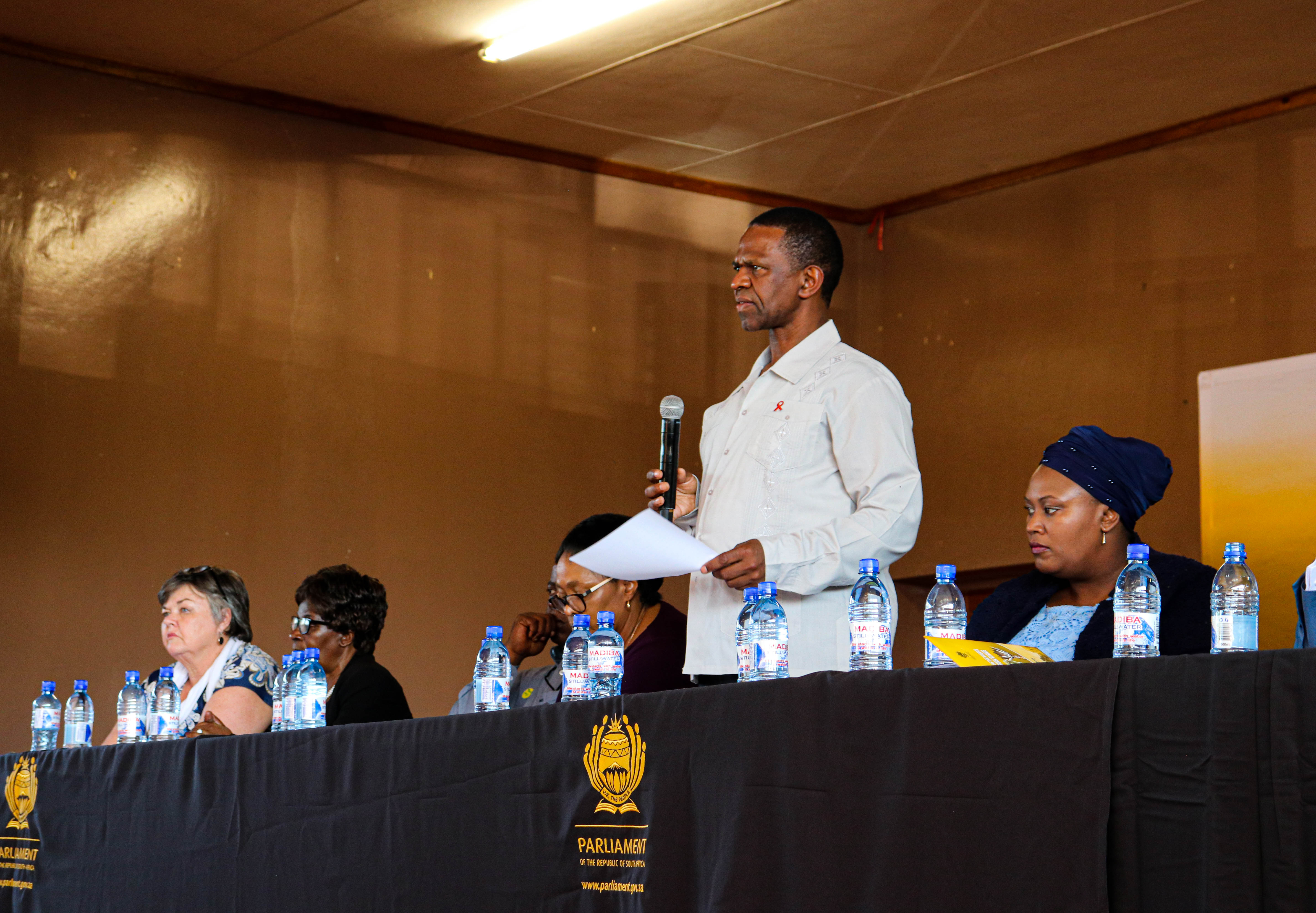 The chairperson of Parliament's Committee on Health, Dr Sibongiseni Dhlomo gives an overview on the NHI bill in the Limpopo edition of the public hearings. (Photo Credit: Health-e/ Luntu Ndzandze)

Across the provinces, the hearings reveal that people do in fact know what they want from a functional health system that serves their needs. But we have to ask, have people been adequately educated about the bill?

#NHIPublicHearings: Four down, five to go, what have we learned so far?

Over a third of the National Health Insurance (NHI) public hearings have been completed. The process, led by Parliament’s portfolio committee for health, aims to go around the country specifically rural areas to collect the views of ordinary South Africans regarding the proposed policy.

The first hearing Health-e attended was in Bushbuckridge in Mpumalanga which had an attendance of more than a thousand people, Parliament said. To date, it remains one of the longest hearing we’ve reported from. Many of the attendees were dressed in political party regalia, which showed how intensely politicised the proposed policy is.

But the hearings are not just about the NHI Bill, they tell a deeper story.

As people line up to say their piece, they crush misguided and classist views that people from rural areas can be easily duped into buying into the draft legislation without fully comprehending what it means.

Yes, many of the oral submissions were in support of the Bill. Some of the submissions were clearly politically motivated, delivered by members of the governing party and alliance partners.

But the majority of the oral submissions came from ordinary people —  the elderly, the sick and the poor — who know exactly what they want from the politicians they elected and the type of healthcare services that will serve their communities. These people are 80% of South Africans who use public health facilities. They are subjected to the best and worst parts of our healthcare.

More than anything, South Africans are using these hearings as a chance to look at their elected leaders in the eye and tell them what everyday life looks like for them. Whether it’s endless days without water, long queues at the clinic or constant medicine shortages. These are the people who truly know what the public health system needs. Nobody else, except these people living in these communities, can give a proper diagnosis of our public health system.

They came prepared with highlighted copies of the bill. Notes on the side and stacks of files with their recommendations critiques.

Many had ideas. For instance, Bernadette Daniels from Upington in the Northern Cape said the bad roads in her neighbourhood make it difficult for her to access health services. In her community, doctors don’t come to her local clinic because of the gravel roads. Daniels is one of many people in rural areas and other ignored places across the country that understands that a functional healthcare system is not only the responsibility of the national health department. These areas are notorious for roads that prevent ambulances from fetching people in need of urgent medical attention.

A majority of the hearings were packed, except for De Aar in the Northern Cape where only 73 people showed up. But the faces of young people were not a popular feature. When they were present, very little to none took to the podium to make a submission. Some of them came from political parties to support or voice their rejection of the bill.

But what about apolitical young people? What about their views on the health policy that could possibly affect how they could acquire healthcare services in the future. The danger of young voices missing from the hearings creates a gap of the government not knowing the kind of healthcare young people needs.

The youth account for almost a third of the population — almost 18 million people  — according to the latest population figures by Stats SA. The current model of healthcare is not youth-friendly, experts have warned. For instance, less than half of young people who are between the ages of 15 and 19, who are HIV-positive are on treatment.

Meanwhile, Parliament’s marketing strategy involves securing advertising space in community newspapers for the NHI public submissions, according to the portfolio committee’s media officer Yoliswa Landu. Is this an ideal to reach young people who spend a lot of time on their smartphones?

There’s no one side to the NHI conversation, it’s too important for nuance to be left out. While it’s clear that there is much support for the Bill, the criticism and concerns cannot be ignored.

For the NHI to work, government would need health workers the buy-in and support. But in the majority of the public hearing did not have any views from them. Health-e went to healthcare facilities in Northern Cape’s capital, Kimberley and asked health workers if they were aware of public hearings, the answer was negative. Doctors and nurses said that they do not understand what the bill is and that the government did not make an effort to call a meeting to inform them about the policy and how it applies to them. This stopped them from making any presentations to the portfolio committee.

While a different story can be told about Ga-Nkoana village in Limpopo. It was a Sunday morning, one could mistake the overwhelming white shirts that occupied most of the seats in the packed hall for a church uniform.

These women in white shirts were community health workers and home-based care workers. They are the driving force of healthcare in the area one of the councilors remarked as he took the podium.

Those who came forward to the mic said that they support the NHI because in their understanding it would mean that their patients would get better access to care. But they expressed that they need urgent intervention from government to address medicine stockouts as they have firsthand experience of patients suffering without treatment. They flagged this as a great challenge in their work.

They even called for the immediate passing of the bill.

But they’re also cognisant of how the fact that rural areas do not attract specialists, leaving people with no choice but to travel to cities like Pretoria to get cancer treatment.

“This area that we live in is a rural area. What measures are you going to put in place to ensure that [medical] specialists are attracted to this area?”, Tabea Matlogongwane put forward to the committee.

“The NHI is a great idea. We can make it work. The problem is that the focus of implementing good ideas are always in cities and metros. When the government talks about the poor, they always refer to the poor in the cities or townships. In most cases, people in rural areas are left outside such programs.”

This resident’s point also speaks to the conversations around the bill. And how the middle class has taken its stand and only their views on the draft legislation matter. Many say these hearings are just politicking. That may be the case in some instances. But they have opened up an opportunity for the periphery to demand their healthcare needs too.

As the hearings venture into the remaining provinces, perhaps Dhlomo’s words sum up what the majority of submissions reflect.