South Africa has an excellent fertility planning and contraception policy, yet poor implementation because of stock-outs and poor training of health providers, says Stevens. (File Photo)

Ten years ago, activist Marion Steven wrote about how sexual and reproductive health services could benefit from the NHI Bill. But she neglected some issues.

Contraceptive services in South Africa have been marred with challenges — from sporadic shortages of supplies to a lack of diverse options in the public health system. The National Health Insurance (NHI) Bill has the potential to solve the problems women in South Africa face with contraception services.

Meanwhile, newer options should be added onto the essential drug list and generic options must be available through the government’s medicine regulatory body. The injectable contraception, commonly called Depo Provera, is the most widely available and widely known — but also the most widely disliked contraceptive. Technical advisers suggest it’s used, despite being disliked, because women don’t have better options for non-oral contraception. The community advisory committee members of the recent ECHO trial have said their biggest fear following the trial will be that the health department will just continue to supply Depo.

We have an excellent Fertility Planning and Contraception policy, yet poor implementation because of stock-outs and poor training of health providers renders this policy ineffective in practice. Health workers graduate without being able to do a pap smear, insert an intrauterine device (IUD) or implant nor how to remove them. Alongside building the fund of the NHI, stewardship needs to be implemented in health managers within the National Department of Health (NDoH), ensuring that generic newer contraception options are provided within the system. The hormonal IUD is a great option for women with endometriosis, heavy bleeding, or perimenopausal.

Imagine the savings to contraception users, if they had that option. 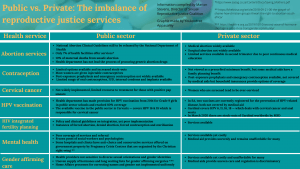 Similarly, abortion services are a truly a mystery. Only 7% of public health facilities provide services, and it is estimated that 50% of abortions are provided by the informal sector outside the formal public health system. It’s that simple — if you can pay, you get the service.

Because of the poor stewardship of the health system in relation to abortion services, we have essentially outsourced this to informal providers who induce abortions with medication. Women have to endure cramping and bleeding without care. It is no wonder we see reports of concealment of births daily, as women are forced to go outside the health system because of the huge demand and inadequate provision. It’s ironic, too, as health providers refuse to care in the public sector, but are willing to provide their services in private care.

The NDoH needs to ensure adequate supplies of all sexual and reproductive health services, which have unfortunately been left to the private sector to register through the regulatory body. Just as with antiretroviral drugs, the health department needs to ensure that generic supplies of abortion medicine misoprostol and mifepristone are available for the beginning of the NHI.

But how will future health workers be trained to administer abortions when teaching hospitals, such as Charlotte Maxeke Academic Hospital (which is attached to the University of the Witwatersrand), doesn’t offer second trimester abortions? What does that mean for the capacity of medical graduates, including obstetricians and gynecologists who graduate from there? Terminating a pregnancy during the second trimester — weeks 13 onwards — can only be performed by a doctor.

Why is it that registered nurses and doctors qualify without being able to do the most basic sexual and reproductive health procedures such as a pap smear or inserting a IUD and removing it?  Why is it that the rates of cesarean sections in the private sector are so high — a procedure that is costly and not always required?

Ten years ago, when I wrote about how sexual and reproductive health services could benefit from the NHI, I neglected to mention these issues. Further concerns, such as the cost of violence against women and femmes,  and the needs of people with diverse sexual orientations and gender identities, need to be prioritised. Then, there’s the 30% of us who will endure mental health challenges over our lifetime — some caused by violent experiences, PTSD, lack of services and dysphoria.

Women also don’t present with single ailments or concerns and in many instances our illnesses are linked to each other. An integrated lens is needed on sexual and reproductive justice care, noting the intersecting presenting health concerns of clients. Policy reviews and assessments within the national health department have pointed to integrated sexual and reproductive health courses for health providers to complete.

Why is it that the country’s “one percent” enjoy a weekly free coffee, following artificial intelligence through their smartwatch monitoring their gym activity and movement? Imagine how many free lunches domestic workers who move much more and care for the one percent could get instead.

Yes, something has to give. As Dr Nicholas Crisp, NHI fund director of the health department, notes: the NHI Bill is the critical reform needed to achieve universal healthcare. The initial years will focus on primary healthcare as it pertains to women and children.

The regulation of funding for our health system through the proposed health legislation and the planning of universal healthcare has to be the impetus for training and supplies to improve — and corruption rooted out. – Health-e News

Marion Stevens is the director of the Sexual Reproductive Justice Coalition.