Where did all the time go? Women bear the burden of lockdown

9th August 2020 | Marcia Zali
Marcia Zali and her young family had it all worked out before, then lockdown hit.

I am the mother of two daughters aged five and two. I’m also a freelance journalist who has worked from home since 2018, so I entered the lockdown confidently. The routine I had worked out for my daughters worked well for my partner and I. We had it all figured out. These last 134-days and counting have challenged everything I thought I knew about being a working mother. Here’s a timeline of how that routine fell apart, and what this lockdown has taught be about the burden women carry in the home.

This year started off with excitement as my eldest daughter started Grade R. It was a big deal for all of us, and came with huge changes already. The sisters had gone to the same creche but were now separated, bringing with it lots of tears and anxiety. New friends and activities like a visit from firefighters on Valentine’s day helped changed that, and so we all settled into a new routine.

We live in Tembisa and our daughter’s school is in Kempton Park so our day starts at 5:30 in the morning. By 6:00 she would be dressed and already having breakfast. At around 6:15 to 6:30, her transport would be hooting at the gate and we would both be running towards it. After school, she’d be dropped off at her younger sister’s crèche for aftercare.

The youngest had it easy. Her crèche is two houses away from our place. I would usually walk her to crèche at 8:30 on days when I was working from home. I would wake her up at 8am in the morning, unless I had an early meeting or event to cover. And they’d be gone for the day. I would fetch both of them from anytime between 4pm and 5:30 pm.

The routine was working and we all had our “stability.” Working from home while the kids were at school and crèche was bliss, I could attend meetings and even go out on field assignments. If I received a call about an event, I could attend as long as I would be home in time to fetch the kids. I met my deadlines and I juggled everything like a pro.

Life under a national emergency

The first weeks of February and March did not have an impact on our routine, even as the number of Covid-19 infections numbers began to increase around the world, and South Africa’s first few infections triggered a national state of emergency on March 15. The idea of living under a state of emergency wasn’t much of a big deal in the beginning. We were obviously nervous because we had never experienced anything like it before, we didn’t know what to expect. And our environment didn’t even indicate that we were under a state of emergency. Life in Tembisa was normal, with everyone doing whatever they were before.

We all started adhering to the personal hygiene protocols of washing our hands regularly, using a hand sanitiser and covering our mouths when we cough. The girls seemed to enjoy having wet hands because every chance they got, they would be at the tap washing their hands, even memorising the slogan of a public service announcement on TV. The youngest was still attending creche, but even there, growing anxiety about sick parents made the rules stricter.

Then came the big announcement by President Cyril Ramaphosa on 23 March about a national lockdown that would start on 26 March.

The idea that by March 27 no one should be out and about was nerve wrecking. Everyone around me was panicking. And I have to confess, I succumbed to panic-buying, my husband and I assuming we’d be trapped in doors for three weeks. It also meant that we at, a lot, because we had so much food. Outside our home, however, life in Tembisa continued as normal. As a family, we took the decision to adhere to the regulations, but it sucked seeing everyone else doing the opposite. Those first few days felt like a food-filled holiday. Our daughters’ school hadn’t started sending work, so we played, bonded, slept, and of course ate. It was fun and unusual to have all four of us at home, all the time. Even now, we cherish this time so much.

My husband and I worked, and my daughters practised writing and counting here and there. On days when I had to go out for a story or meeting, daddy would be home to watch the girls. This was our daily life and even when the school started sending in the lessons on WhatsApp, we were cruising through life. Both girls had even developed the habit of taking videos of themselves while imitating their teachers from crèche. This was a huge learning experience for us to see how their time away from us was.  My eldest though misses her school routine, and asks often if she’ll have to miss the party promised to Grade R’s who pass the year.

And then came level four and my partner had to go back to work, and slowly our holiday came to an end. Before lockdown, I had underestimated how much of a difference it makes having someone to share domestic duties with, after all with the girls at school, I managed just fine. Normally, my husband would usually wash the dishes while I give the girls a bath but during lockdown, we took turns in almost all of the house chores. If I made breakfast, he would make lunch and I supper. I would clean the house and he would wash the dishes.

When he went back to work, it was all up to me to do everything on my own, again. Only this time, there is no crèche or school to take the girls to while I work. It is not easy to do everything, mostly alone. I have been fortunate to have continued working during this pandemic, but it has also brought with it an increased burden when it comes to caring for my kids.

The WHO (World Health Organisation) in Africa also reports that “the burden of caring for the sick is largely borne by women”. It further reports that women, who account for 90% of the informal sector workforce impacted by lockdown regulations, face greater economic hardships as a result of the pandemic.

It has become impossible to separate my work and personal lives, and the only way to keep track of time is through endless Zoom meetings. With almost everything being done virtually, the work day no longer has a starting and finishing time. WhatsApp chats with colleagues start coming in before 7 am and sometimes continue well into the evening. Family responsibility has not set time either, and the two parts of my life bleed into each other. I would be working on a story and while making a call or writing it, one of my kids will come in, needing my urgent attention. Sometimes, I work on the weekend because I have a backlog of but that affects my time with the family. Each day I realise the importance of school and day-care not just for children, but for working parents as well.

Night time has become he only time where one can actually get some work done and even that is challenging. The girls no longer sleep around 7 pm or 8 pm and I’ll be lucky if I can start working before 10. I have found that I get more focused and productive after midnight but even that is hard to be consistent in because I can’t nap during the day but I have deadlines that I need to meet so I soldier on. That, however, means less sleep for an already exhausted, and sometimes overwhelmed me.

Life under lockdown with no end in sight

The lockdown was supposed to be for 21 days until President Cyril Ramaphosa announced an extension that continues. By now, my routine no longer exists. It’s a daily struggle to meet deadlines while ensuring that the girls are fed, clothed and away from each other’s throats.

The need to maintain some normality, and then failing at it, brings anxiety and self-doubt. I have never been as critical of myself as a mother and a wife as I have been in the last four months. This brings with it bouts of depression, where I’d like to do nothing more than wallow in self pity but even that is a luxury with a toddler tugging at you.

I have stopped planning every detail of my days now. I take the day as it comes and anything that I didn’t do, I can do tomorrow. This allows me to stop blaming myself for slacking because there really is no way to maintain something that you don’t have control over, especially where kids are concerned. It’s helped me take care of my mental health, especially as social media brings new death announcements each day.

Covid-19 and the effects of lockdown have been brutal, but in the home it is mothers who bear most of the burden. And for many of us, night time is no longer a time to rest, but an extended night shift.

The Novavax vaccine proves to be only 49.4% effective against Covid-19. The vaccine is undergoing trials in both South Africa and the United Kingdom. 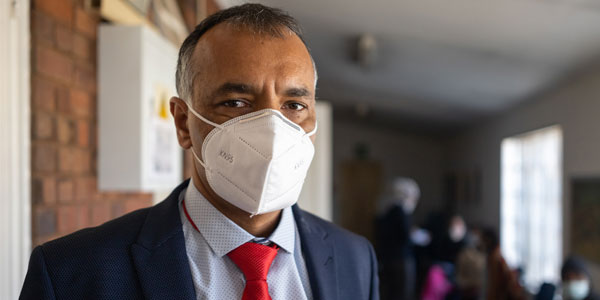 The World Health Organisation has deployed a team of experts to help the government stem the coronavirus infections in South Africa. The country is one of the five countries most affected by the pandemic.

A youth-driven non-profit organisation is helping children and teenagers in rural Limpopo stay in school, with the hope of securing a bright future for the whole region.