Some parts of South Africa are experiencing a surge in infections. (Michel Paquin/Flickr)

Health Minister Mkhize orders Gauteng Health Department to “reconcile their data” after embarrassing contradictions in the number of new cases versus recoveries. In the meantime, Western Cape premier issues warning over increased cases.

The usual government Covid-19 update for Wednesday raised questions, after the release left off numbers for Gauteng. The gap is due to what appears to be incorrect data for the province that has had the highest number of coronavirus cases to date.

“We have brought this to the attention of the province and they have indicated that they are in the process of harmonising the data,” he said.

“For this reason, we will not be reporting the recoveries and active cases in the province for today while we await the urgent conclusion of these processes,” he added.

As National Department of Health, we have identified that there is a need to reconcile data in Gauteng Province.

We have brought this to the attention of the Province and they have indicated that they are in the process of harmonizing the data.

This raised questions in a high density province with the largest population in South Africa.

According to Gauteng health, only seven people died in the 24-hour period. That was low compared to 51 in the Eastern Cape, 30 in the Western Cape, 24 in Free State, four in Limpopo and two in KwaZulu-Natal.

“We extend our condolences to the loved ones of the departed and thank the healthcare workers that treated the deceased patients,” Mkhize said in a statement.

On Wednesday 179 new cases were reported in Gauteng, but the data released by the province indicated total positive cases down by 40. There were 283 cases on Wednesday but surprisingly that figure dropped to 243 on Thursday, despite the new cases logged. 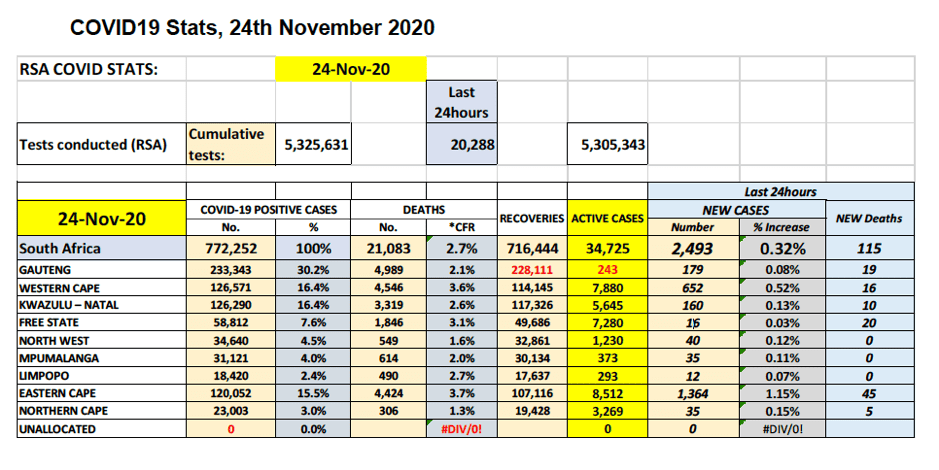 Rising fears in the Western Cape

Meanwhile, Western Cape Health officials have issued a stark warning as the number of cases rose by over 52.1% in a week.

According to a statement by premier Alan Winde, this increase is primarily driven by two districts—the Garden Route and the Cape Metro.

Despite a warning last week about the sudden increase in cases in the George and Knysna sub-districts, the surge has gained momentum. There are now also growing concerns about the number of cases in the Cape Winelands.

“My biggest concern is for our health platform, which is under growing pressure,” Winde said  in a statement on Thursday. “In the last 24-hour reporting period alone, the number of people being hospitalised for Covid-19 increased by a staggering 54 people.”

Critical care admissions increased by 75% in November, leading the premier to call on citizens to reconsider their daily activities.

“We need every person in the Western Cape to help prevent a lockdown and to ensure that there are enough empty beds in our hospitals for those who need them,” said Winde.

“We must be under no illusion as to how serious the situation is, and how quickly it can deteriorate further,” he warned.—Health-e News