As international organisations deal with the threat of a global Covid-19 pandemic, the call is out for citizens to keep those who are dealing with HIV/AIDS or have died in their thoughts. More than 38 million people globally are living with HIV while 24.5 million are accessing antiretroviral therapy. In the last year alone, 1.7 million people became infected with HIV despite health authorities drive to reduce the figure. At least 690 000 people died from AIDS-related illnesses in the past year.

In a statement, the UNAIDS organisation said no one is safe until everyone is safe.

“Leaving people behind is not an option if we are to succeed,” the UN agency said in a media released. 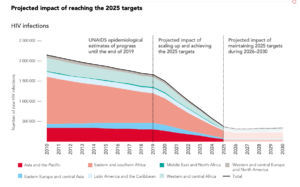 “Eliminating stigma and discrimination, putting people at the centre and grounding our responses in human rights and gender-responsive approaches are key to ending the colliding pandemics of HIV and COVID-19.”

She is warning that the Covid-19 pandemic has had far-reaching effects on health systems and public services.

“In many countries, HIV services have been disrupted, and supply chains for key commodities have been stretched,” she said.

Byanyima also warned that any country adopting a go-it-alone policy would be exacerbating the situation.

“No country can defeat the colliding pandemics of HIV and COVID-19 on its own,” she said.

“Such global challenges can only be defeated through global solidarity and shared responsibility. This requires us to be bold, to build on our successes and to learn from our setbacks.”

We stand in solidarity with all people living with or affected by HIV, and we remember our friends and family who have died from AIDS-related illnesses.

The UN has reset its targets combating HIV/AIDS in the wake of the Covid-19 pandemic.

According to the UNAIDS report, five years after a commitment to speed up the HIV response and end AIDS completely by 2030, the world is off track. 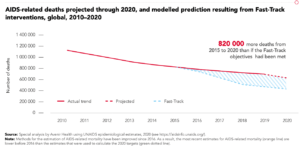 It said important gains have been made in the most affected regions of sub-Saharan Africa and the Caribbean, but these have bene offset by a surge in HIV/AIDS in Latin America, eastern Europe and central Asia.

The Middle East and North Africa have also recorded an increase in the last year.

At the same time, there has been a dip in the number of new HIV diagnoses and treatment initiation because people are unable to reach health facilities that are clogged by Covid-19 cases.

Usually the number of cases worldwide averages 4.8% for the period between January and June, but this year the number rose 2.4%.

The UN said this is misleading and that an additional 4 million people would need to be accessing treatment to reach the target for the end of 2020 of 30.0 million.

Drilling down further in the data, the UN reports that new HIV infections among children fell by more than half from 2010 to 2019, but progress on the elimination of mother-to-child HIV transmission has been slow since 2016.

“This is in part because of challenges related to diagnosing women who are infected in late pregnancy and during the breastfeeding period, and for retaining on treatment those who have been diagnosed throughout pregnancy and breastfeeding,” it warns. 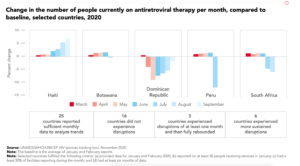 The report indicates that among 25 countries that have good data on treatment service use, by end of September 2020, most showed no decline since April 2020 in the total number of people living with HIV who are receiving antiretroviral therapy.

South Africa is one of the countries which have registered what the UN calls a “worrisome drop” in treatment utilization. Others include the Dominican Republic, Guyana, Peru and Sierra Leone.

Lesotho and Uganda have rebounded the quickest from the effect of Covid-19, while South Africa has seen a more sustained disruption.

Countries that are finding it difficult to restart full HIV/AIDS prevention and treatment programms include Cambodia, Ethiopia and Kenya where the number of pregnant women started on antiretroviral therapy declined by 25% or more.

“These declines were sharp and short-lived in Lesotho and Zimbabwe, while they extended through September in Kenya and South Africa,” the report said.