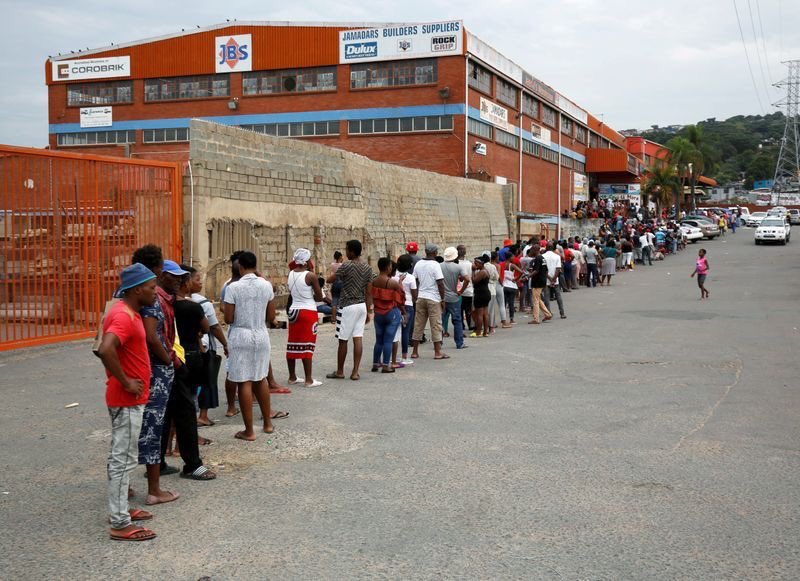 Service delivery in the Eastern Cape has suffered over the past year, but now there are fears that the people lining up for social services for hours on end are accelerating the spread of Covid-19.

According to premier Oscar Mabuyane, the province has engaged with relevant national departments on how to deal with public service offices that are potentially becoming COVID-19 super-spreaders due to long snaking queues.

In most towns the post office, Department of Home Affairs and Department of Labour offices are jam-packed with people waiting to be dealt with by officials.

“These are proving problematic to manage due to long queues and other system failures,” Mabuyane said, adding that social distancing was also not being observed at these centres.

“It’s a terrible thing we are seeing in rural areas and towns. Our people are dying and these areas have the potential to be super-spreaders if they aren’t as we speak.”

Super-spreader events in the province are thought to include local sports, street bashes, wakes, weddings, church and mosque services and drinking sprees at taverns and shebeens.

He said there was a need for interim measures to be put in place to limit the risk of the spread of the virus.

The Eastern Cape has the second highest number of deaths recorded over the past 24 hours topping 107 by Wednesday 23 December.

That is only just behind the Western Cape which logged 142 deaths, KwaZulu-Natal 45, Gauteng 8, and 7 in both the Free State and Limpopo.

Since the last report on Monday, 39 045 tests were conducted with 6 215 728 cumulative tests commpleted.

Infections up, hospitalisations down

Despite this, Mabuyane said provincial health officials say while overall numbers of infections are up, the total number seeking hospital support has actually dropped 10 December. But health authorities are on the war path when it comes to citizens breaking Covid-19 laws.

“The average daily admissions have decreased by 46,6% from 204 admissions on 14 December to 109 on 21 December. We are now seeing less admission of patients than we did on the 10 of December,” @OscarMabuyane #EasternCape

“I want to warn in particular tavern owners that we will close their establishments if we arrive and find a situation where there is non-adherence to non-pharmaceutical health protocols,” said the Premier.

As with other provinces such as KwaZulu-Natal, radical elements are destroying infrastructure as part of local labour disputes. Mabuyane had short shrift for these people, condemning what he called  the deliberate destruction of water infrastructure reported in Amathole and OR Tambo District Municipalities.

“We welcome the breakthrough that Amathole DM has reached with Labour and we encourage OR Tambo District Municipalities to engage workers in good faith knowing that the municipality is mandated to provide basic services to the majority of our people,” he said.

While the state institutions are close to collapse and organisations such as Gift of the Givers have built new ICU units in Makhado, formally Grahamstown, government has softened its stance when it comes to NGO support

“We will be engaging the private sector to pump in more investments into our healthcare sector,” he said.

“Another area of concern which we will take up more robustly with our national government colleagues is the provision of services in post offices and home affairs offices.”

The province, he said, is “not seeing improvements in the provision of services in those two services points and our people are at risk of getting infected while standing in long queues”.

“As of 14 December 2020, R17.4 million (working capital inclusive) funding of the Jobs fund was approved for 22 distressed businesses in manufacturing, agro processing and tourism to protect 1123 jobs,” he said.

“About 43 applications from businesses are in the pipeline for processing and these are to protect 1 098 people from losing their jobs. The target going forward is to provide R39.2 million for distressed businesses to save a minimum of 2 700 jobs.”

Down Payment on vaccine

Meanwhile, South Africa has made a down payment to secure the COVID-19 vaccine for 10% of the country’s population.

“The National Department of Health and the Solidarity Fund are pleased to announce that a down payment of US $19.2 million USD (R283 million) has been made to GAVI (the Vaccine Alliance) to secure South Africa’s entry into the COVAX facility,” the department and fund said in a statement.

The payment was made in line with the fund’s previous allocation of funds and commitment to support government’s efforts to accelerate the roll out of vaccines in South Africa.

COVAX has confirmed South Africa’s entry into the facility. The down payment represents 15% of the total cost of securing access to vaccines for 10% (roughly six million) of the population.

While South Africa is acquiring vaccines from COVAX for 10% of its population, what about the other 90%? It is negotiating with pharma companies to see “if there is a possibility of vaccine supply at an affordable price.”
Key issue: will this be a transparent and fair process? https://t.co/MOVYoEq1Uf

The country’s membership in the COVAX facility ensures that South Africa receives its equitable share of the vaccine once it becomes available.

Minister of Health, Dr Zweli Mkhize, has hailed this milestone as the epitome of excellence in health service delivery through multilaterism.

“It is a privilege to oversee a process that has brought together government, international partners and business for the sole purpose of delivering quality health care to the people of South Africa.

“This is what we have been advocating for when we speak of multi-sectoral collaboration, and it is gratifying to see this spirit being harnessed for the good of our people, Africans and the global village,” Mkhize said.

Solidarity Fund chairperson, Gloria Serobe, said there can be no doubt that a COVID-19 vaccine will play an important role in helping South Africa manage the virus.

“The Solidarity Fund was set up for exactly this purpose – to be additive to the work of government and assist in initiatives and programmes that have the greatest impact in the fight against the pandemic. The fund is grateful to be in a position to assist at this crucial juncture,” Serobe said.

The Department of Health’s Director-General, Dr Sandile Buthelezi, has thanked the Solidarity Fund for providing the financial support that has enabled the country to meet the down payment obligations, as required in terms of the agreement.

“The Department of Health will make additional payments in relation to vaccines delivered under the COVAX facility as they fall due over the next year,” Buthelezi said.