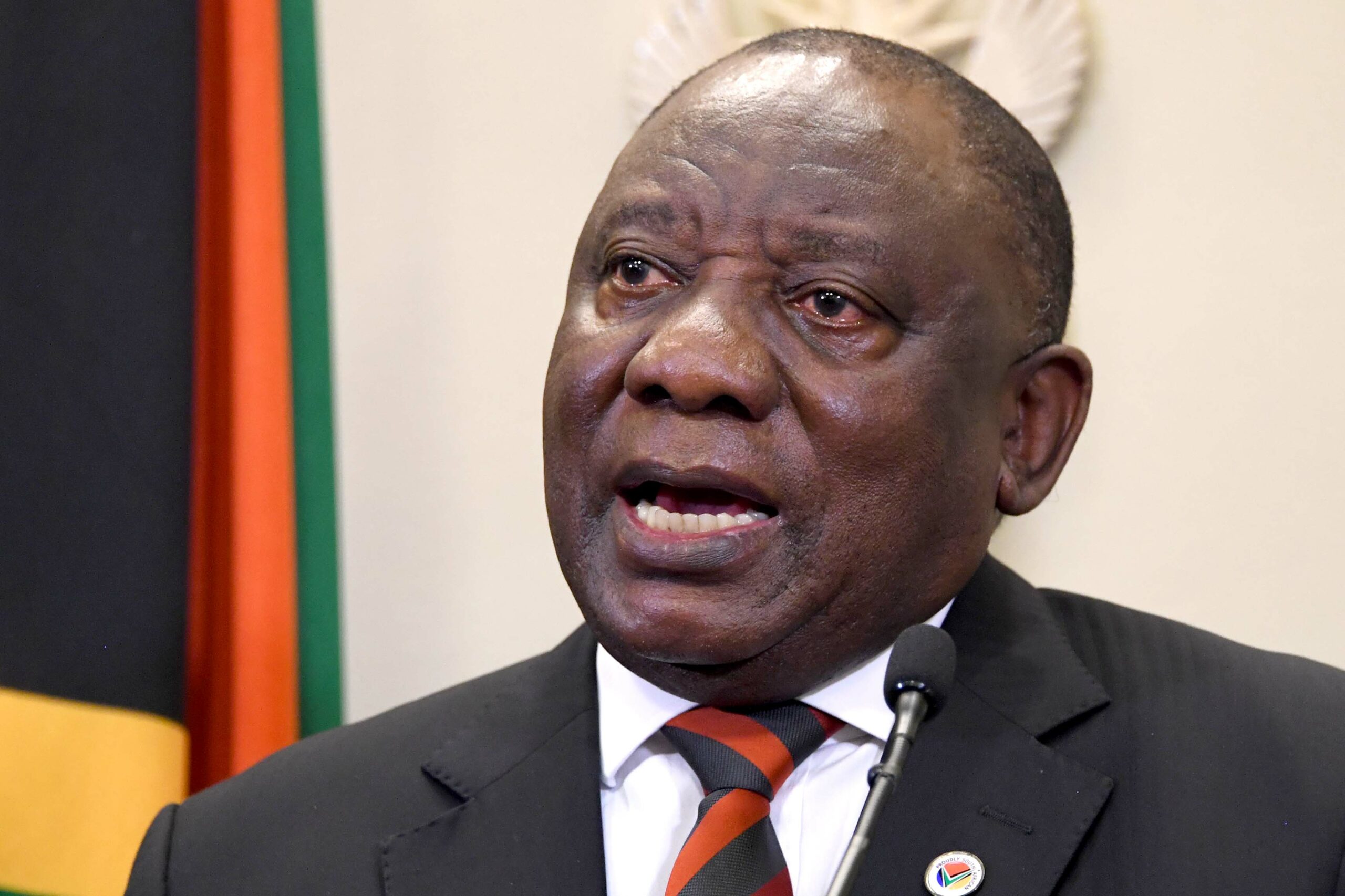 #CoronavirusSA: Back to level 3 restrictions for South Africans as Covid-19 persists

With the number of new coronavirus infections climbing at an unprecedented rate, South African President Cyril Ramaphosa has announced the country is back to level 3 lockdown – but with harsher restrictions.

Ramaphosa labelled super-spreader events such as end-of-year functions, family and social gatherings, and music and cultural events as the main cause of the rapid rise in infections.

That comes as the nation is about to celebrate New Year’s Eve.

“This is a cause for great alarm, and points to an extreme lack of vigilance over the holiday period. We have continued to host and attend social gatherings and events that in many cases flout public health regulations,” said Ramaphosa.

More than 50, 000 new Covid-19 cases have been reported in South Africa since Christmas, while almost 27, 000 South Africans are known to have died from Covid-19.

In some parts of the South Africa, the number of cases have accelerated in the past fortnight, driven by a new variant called 501.V2.

According to Ramaphosa, precautionary measures put in place to help minimize the spread of Covid-19 are not being practiced, resulting in the rapid increase of positive cases being reported daily.

“We have let our guard, and unfortunately we are now paying the price. We have not been wearing masks. We are not washing our hands or sanitizing, and we are not keeping a safe distance from others,” he said.

World Health Organization (WHO), encourages people to clean hands often, cough or sneeze in a bent elbow-not hands, to avoid touching eye, nose and mouth and to limit social gatherings and time spent in crowded places.

But according to the president, such measures are not being practiced in South Africa, despite the country having passed the mark of more than one million confirmed coronavirus cases.

“The sooner we understand that it could very well be us in that ambulance speeding by, or us in that hospital bed, or us being buried at that funeral, the sooner we come to the reality of what we are facing right now,” warned Ramaphosa.

Most of the new cases are emerging in Kwazulu-Natal, the Western Cape, Gauteng and the Eastern Cape. While infections are also on the rise in Limpopo, which was among the provinces with the least number of positive cases by the start of December. That is changing rapidly as hospitals report a surge in patients.

Health workers are not prepared for second wave, unions. But @DrZweliMkhize
and @CyrilRamaphosa @PresidencyZA said they are ready. https://t.co/1PWzqdFpaw

The president said that the National Coronavirus Command Council decided to put the country back to level 3 restrictions to help minimize the risk of super-spreading events.

“We have adjusted the restrictions that will apply at level 3 based on the lessons we have learned through our response to date. Firstly, we want to minimize the risk of super-spreading events even further. As the number of people with active infections rises, there is a greater risk of an infected person without symptoms being present in a gathering and spreading the virus,” he said.

Among other level 3 restrictions include: all indoor and outdoor gatherings will be prohibited for 14 days, except for funerals. While the national wide curfew will be extended from 9pm to 6am. And the sale of alcohol from retail outlets and the on-site consumption of alcohol will not be permitted. There is also a curfew from 9pm to 6am.

“Reckless behavior due to alcohol intoxication has contributed to increased transmission and alcohol-related accidents and violence are putting pressure on our hospital emergency unit, “said Ramaphosa.

“We each have a responsibility to wear masks, wash or sanitize our hands and keep a safe distance from others,” added Ramaphosa.

Under the adjusted, level 3 regulations, all indoor and outdoor gatherings will be prohibited for 14 days from the date hereof, except for funerals and other limited exceptions as detailed in the regulations, such as restaurants, museums, gyms and casinos.

Funerals may not be attended by more than 50 people and the observation social distancing measures must be adhered to.

“Every business premises must determine the maximum number of staff and customers permitted at any one time based on our social-distancing guidelines and may not exceed that limit.

“The nationwide curfew will be extended from 9pm to 6am. Apart from permitted workers and for medical and security emergencies, nobody is allowed outside their place of residence during curfew,” the President said.

The President further announced that non-essential establishments – including shops, restaurants, bars and all cultural venues – must close at 8pm. The list of these establishments will be released shortly.

“From now on it is compulsory for every person to wear a mask in a public space. A person who does not wear a cloth mask covering over the nose and mouth in a public place will be committing an offence.

“A person who does not wear a mask could be arrested and prosecuted. On conviction, they will be liable to a fine or to imprisonment for a period not exceeding six months or to both a fine and imprisonment. This is a drastic measure but is now necessary to ensure compliance with the most basic of preventative measures,” President Ramaphosa said.


The President expressed concern about the elderly and those with co-morbidities. He urged South Africans to do their utmost to protect themselves from the virus, especially minimising their contact with other people.

In the televised address, the President also turned his attention to the sale of alcohol.

“One of the more difficult areas of regulation relates to the sale of alcohol. The liquor industry is a major employer and an important contributor to our economy. 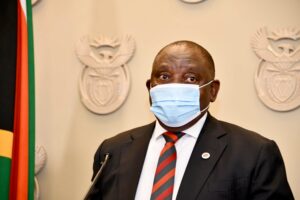 “Our priority at this time, however, must be to save lives. Reckless behaviour due to alcohol intoxication has contributed to increased transmission. Alcohol-related accidents and violence are putting pressure on our hospital emergency units,” the President said.

As a result, regulations relating to alcohol have been strengthened.

The sale of alcohol from retail outlets and the on-site consumption of alcohol will not be permitted.

“The prohibition on consuming alcohol in public spaces like parks and beaches remains. Distribution and transportation will be prohibited with exceptions that will be explained by the Minister.

“These regulations may be reviewed within the next few weeks if we see a sustained decline in infections and hospital admissions,” the President said.


He said the adjusted level 3 regulations will keep the economy open while strengthening measures to reduce transmission.

“With a few exceptions, businesses may continue to operate as long as all relevant health protocols and social distancing measures are adhered to.

“Night clubs and businesses engaged in the sale and transportation of liquor will not be allowed to operate,” the President said.

The level 3 restrictions will remain in place until 15 January 2021.

“These measures will be reviewed at that time on the basis of the state of the pandemic in the country,” the President said.

#COVIDー19
How can this even be legal. Gatherings in #Knysna, #SouthAfrica where the 2nd wave made this area a Hotspot. Photo taken today. Where is the Covid cops? pic.twitter.com/Qz74uVaDlK


Meanwhile, municipalities defined as hotspots will be subject to additional restrictions until there is a clear and sustained decline in infections

Following a review of the latest available data on infections and hospitalisations, and consultations with affected provinces, Cabinet has decided that further areas be declared as Coronavirus hotspots.

In the Eastern Cape, the following areas have been declared as hotspots: Chris Hani District, Buffalo City, Amathole District, Alfred Nzo District and the OR Tambo District.

These are in addition to Nelson Mandela Bay Metro and the Sarah Baartman District, which have already been declared hotspots.

“In Gauteng, the West Rand District, Tshwane, Ekurhuleni and Johannesburg are declared hotspots.

“In the Western Cape, the West Coast District, Overberg District, Winelands District, Cape Town, Central Karoo District are hotspots. This is in addition to the Garden Route District,” the President said.

All beaches closed until January 15

“As the infections continue to rise, Cabinet on the advice of the National Coronavirus Command Council has decided that all beaches, dams, lakes, rivers, public parks and public swimming pools in hotspot areas will be closed to the public with effect from tomorrow.

“National and provincial parks and other parks where access control measures and entry limitations are already in place may remain open to the public,” the President said.

He said those living in the hotspot districts are strongly encouraged to minimise their travel within the district to essential travel so as to minimise contact with other people.

“Travel to hotspot districts should be avoided if possible. The stark reality is that every single district in this country has the potential to become a hotspot unless we observe the current preventative measures,” the President said.