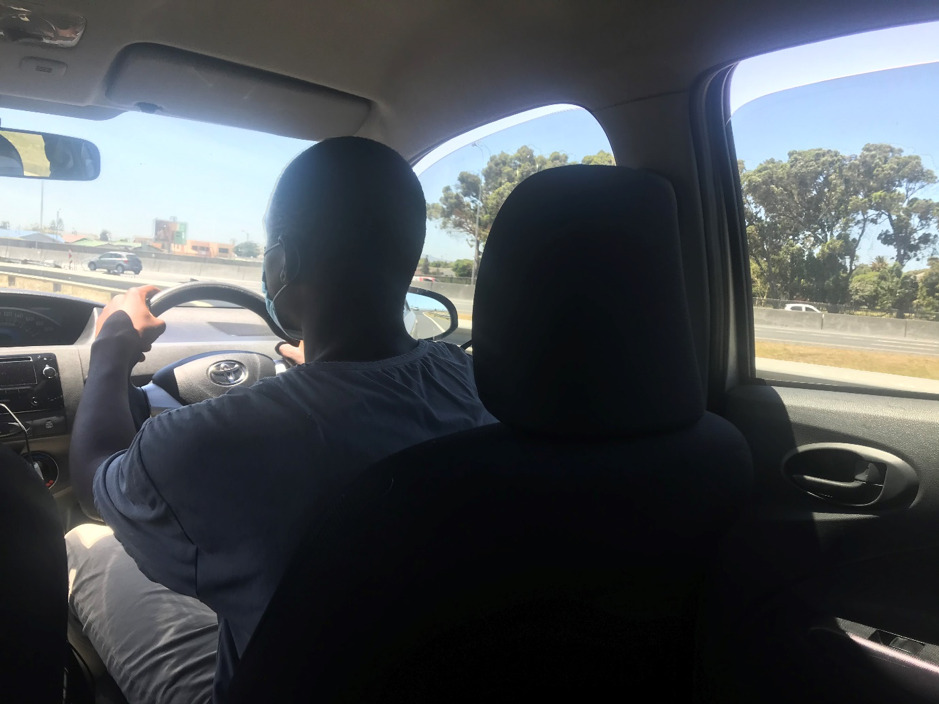 Ride hailing drivers who work for companies such as Über and others have experienced a sharp downturn in their incomes as the pandemic mutates.

With the new COVID-19 variant discovered in South Africa, efforts to curb the rapid spread of the second wave of infections have had a major impact on gig economy workers.

And this has had a detrimental effect on many people who are relying on the gig-economy to survive. An analysis in the early phase of the Covid-19 pandemic found that has found that the non-standard employment status of gig workers during Covid-19 had made them particularly vulnerable during an economic shutdown.

Health-e News reporter Soligah Solomons accompanied and tracked local ride hailing driver *Sam’s movement across Cape Town in order to understand the daily risks associated with the job. The route included some of the most popular destinations out of the Southern Suburbs such as Cape Town International Airport and the V&A Waterfront. 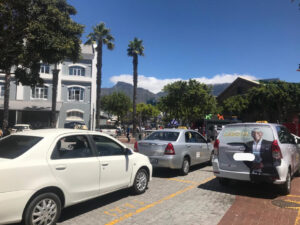 Waiting for passengers in Cape Town

The Summer season is typically the busiest time of the year for drivers as tourists flock to South Africa and request rides from the airport to various destinations across the country. In 2020 the total number of tourists amounted to 17.3 million and it has been forecasted that by 2023 it will reach 19.6 million, according to Statistica. But that all changed as the effect of the pandemic took hold. In its annual Provincial Outlook and Report (PERO 2020), Western Cape officials said the economy had suffered “a significant shock” in 2020.

“Even before the current economic crisis, brought upon by COVID-19 pandemic, the Western Cape, along with the rest of South Africa, struggled economically,” it said in the report.

“In 2020, Tourism and restaurants suffered significant losses, while agriculture was the only sector that positively contributed to GDP growth in the 2nd quarter (Stats SA, 2020). These shocks in GDP have important implications for the Western Cape.” 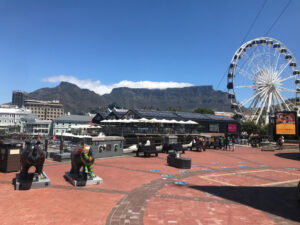 Sam’s declining ride requests throughout this festive season is testament to the speculated decrease in the number of tourists visiting the country. When asked how the recently adjusted lockdown level 3 affected his business operations, the driver commented that he couldn’t accomplish half of his normal business as fewer people moved around on New Year’s Eve and thereafter due to the countrywide curfew from 9pm and 6 am.

“Every driver looks forward to the big public holidays or those days that people move around a lot (especially New Year’s Eve) because that’s when business is extremely high,” said Sam.

“So, with the adjusted level 3 in place I couldn’t do I’d say even half of the business I could’ve done under normal circumstances. People weren’t making many movements for fun and the time was very limited because of the curfew.” 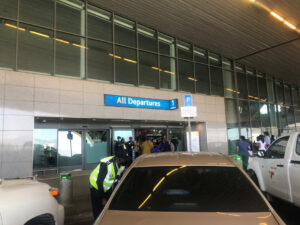 Waiting on a prayer

South Africa’s general growth outlook has been marred by the pandemic with a reported 51 percent contraction in Gross Domestic Products (GDP) in the second quarter. This was the fourth consecutive quarter of an economic decline which had already weakened local tourism in the Cape. The National economy contracted by close to 10 percent for 2020 and is the largest decline in 90 years. 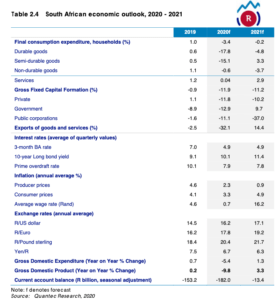 With the youth driving the second wave of infections, health authorities said the latest wave is having affecting more youngsters than the first wave.  Sam noted that he typically transports passengers across the Southern suburbs in Cape Town and young people make up the majority of his customers. At the same time, Cape Town’s southern suburbs are a hot spot for the new variant of Covid-19.

The Department of Health reported in December that Subdistricts in the metro which are of great concern such as the Southern Suburbs which experienced an 87% increase in Covid-19 cases, along with Mitchells Plain (185%) and Khayelitsha (92%).

According to Sam, even though the protocols have been put in place to encourage the use of paying via credit or debit cards, some passengers still pay with cash exposing the driver to possibly contracting the Coronavirus.

He said the gig economy employer had offered to install plastic covers between the driver and passengers and provided hand sanitizer during the first few months of COVID-19. However, no such assistance has been forthcoming.

“The [company] for instance offers to install a plastic between the driver and the backseat passengers but still there’s contact when they’re paying. So, I’m not sure about the effectiveness and also they used to offer [hand] sanitizers at the beginning of the [COVID-19] pandemic but perhaps with the unexpected duration of the pandemic, it is costly. So, they don’t send messages anymore telling drivers where they can get some [hand sanitizers].” 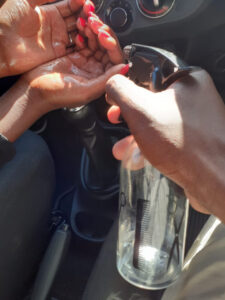 Saving lives one spray at a time.

But Sam has declined to pick up passengers who refuse to wear masks or sanitize their hands.  He also regularly deep cleans the vehicle, ensures the hand sanitizer is refilled, and most importantly says a silent prayer in hopes of protection on the road and also for the COVID-19 virus to come to an end.

*The driver’s name has been changed.