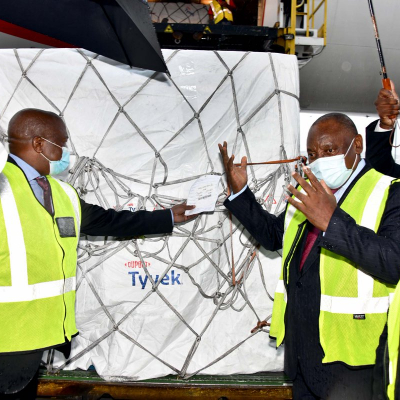 As South African’s welcomed the first million doses of the AstraZeneca vaccine questions remain about how effectively they will be distributed.

Not even pouring rain could dampen the excitement of the crowd that gathered as one million doses of the Oxford-AstraZeneca vaccines arrived on the runway at OR Tambo International Airport in Johannesburg on Monday.

This marks the start of what experts are describing as the largest and most complex logistical vaccine undertaking in South Africa’s history. Unlike other vaccines, however, which must be stored at temperatures of -70C, the Oxford vaccine which is produced by the Serum Institute of India, also known as Covishield, can be stored at normal fridge temperature which will help with the ease of distribution.

The national government aims to vaccinate around 40 million people in coming months to establish herd or population immunity to protect South Africans from the novel coronavirus.

Addressing the nation on Monday evening President Cyril Ramaphosa said this signifies a new chapter in South Africa’s fight against the pandemic.

“The arrival of these vaccines contains the promise that we can turn the tide on this disease that has caused so much devastation and hardship in our country and across the world,” he said, adding that vaccines would be tested at the National Control Laboratory to confirm that their integrity was maintained during transportation, before being distributed to thousands of healthcare workers nationally.

“We must ensure their protection as they fight for ours.”

Ramaphosa said a further 500,000 doses of Covishield are expected to arrive in South Africa later this month, while 2 million of the 12 million vaccines secured from the global COVAX facility will be released by March. Nine million Johnson & Johnson vaccines have also been secured for delivery in the second quarter of the year, while pharmaceutical giant Pfizer has committed 20 million vaccine doses in the same period.

Private healthcare facilities across the country are preparing to support the National Department of Health in the roll-out of Covid-19 vaccines. Dr Gerrit de Villiers, the Chief Clinical Officer of Mediclinic Southern Africa, told Health-e News that the hospital group is working closely with health authorities to ensure vaccinations efforts are a success.

“We have applied for all our Mediclinic facilities to be registered as vaccination centres to further assist in the rollout of vaccines, and vaccinators are currently undergoing online training to ensure that we comply with all regulations relating to the roll out,” he said.

Mediclinic has submitted a request to the National Department of Health to ensure sufficient vaccines for its frontline workers, which include doctors, nurses, other medical personnel, cleaners, porters and other allied healthcare workers.

Cheryl Brands runs a frail care facility in Krugersdorp on Gauteng’s West Rand. She says while she is concerned about the efficacy of the vaccine against newer strains of the virus, she will encourage her elderly residents to receive the vaccination when it becomes available to them in the second phase of the roll out. “For them, at this stage anything is better than nothing and I believe they need all the ammunition they can get to fight this,” she explains.

Another concern, she adds, is that vaccinations may give people a false sense of security.

“The care workers in my facility might also benefit from the vaccine but personally I do have a huge concern that people who get vaccinated may become oblivious to the preventative measures and may very well think that it means that this vaccine is the end of the pandemic, which we know is not the case.”

Acting HOD for Health in Gauteng, Lesiba Malotana, says the province aims to vaccinate 10.5 million residents in coming months at over 700 registered vaccination sites during the first phase of the vaccine rollout. During this initial phase, frontline healthcare workers will be prioritised.

“Once that is covered, phase two will be the biggest exercise,” he said. The third phase will aim to vaccinate the rest of the population. Malotana says in the second and third phase of the province’s vaccination efforts, more than 2 000 sites have been registered.

Meanwhile, the Democratic Alliance says this is not enough. The DA’s Shadow MEC for Health in Gauteng, Jack Bloom, has launched a petition calling on the Gauteng Provincial Government to make an effort to secure additional vaccines where possible.

“This is because the sole reliance on the national government to procure vaccines is unnecessary and unwise as health is a provincial competence,” Bloom explained on Monday.

“The Gauteng Health Department has set a target of 10.72 million [people vaccinated] to achieve herd immunity and effectively stop the virus spreading, but projected supplies of vaccines will not arrive in time to mitigate an expected third wave of infections in early winter,” he said.

Bloom added that while healthcare workers were promised the vaccine before the end of January, this would only become a reality in mid-February at the earliest due to logistic and quality control issues.

“The benefits of vaccines for saving lives and livelihoods in Gauteng are immense, and the earlier the better,” he said.

“We would not need more than R1 billion to vaccinate 10 million people in Gauteng, which is less than one percent  of the total provincial budget. It is also far less than what has been misspent, wasted and stolen in this province from money allocated to fight the pandemic.”

The DA is not alone in expressing concerns about the national government’s rollout plans. Traditional healers have expressed concern that they will be left out when other healthcare workers are vaccinated against the virus in coming weeks.

Prof Sylvester Hlati is President of the SADC Unified Traditional Practitioners Association. He says they have not been given an indication as to when they will be eligible to receive the Covid-19 vaccine.

Hlati, believes traditional practitioners and their role on the frontlines is being overlooked, while 85 percent of South Africans make use of their services on a regular basis.

“It is really sad that we are left behind, and we don’t even know if we are included in the second phase or if we will wait for everyone to be vaccinated,” he said.

Delia Hamlett is a teacher at a small private school in Johannesburg. She says despite educators only being eligible to receive the vaccine in later phases of the rollout, the arrival of the vaccine on South African soil brings her immense relief.

“This pandemic has devastated so many lives and has wreaked havoc on children’s education, and these vaccinations are a critical step in putting education back on track,” she told Health-e news.

She says after healthcare workers, teachers should be prioritised, along with other essential service workers. Hamlett looks forward to standing in line to receive her jab.

Like Hamlett, many other essential service workers look forward to the added peace of mind that receiving the vaccination will bring.

Yeshiel Panchia is a Joburg-based multimedia journalist. He says the benefits of a working vaccine will have an immense impact on his life and well-being.

“I feel incredibly positive about it and I think that the vaccination is an absolute necessity.” Panchia says he looks forward to seeing less brutality and less death in the line of duty.

“It will also give me peace of mind when I’m out working and interacting with people that there will be a much lower risk of me passing on the virus, and I’ll pose a much lower risk to my family members, my friends and my loved ones.” —Health-e News