Home » #Covid-19 vaccine: Behind the scenes health workers are in two minds 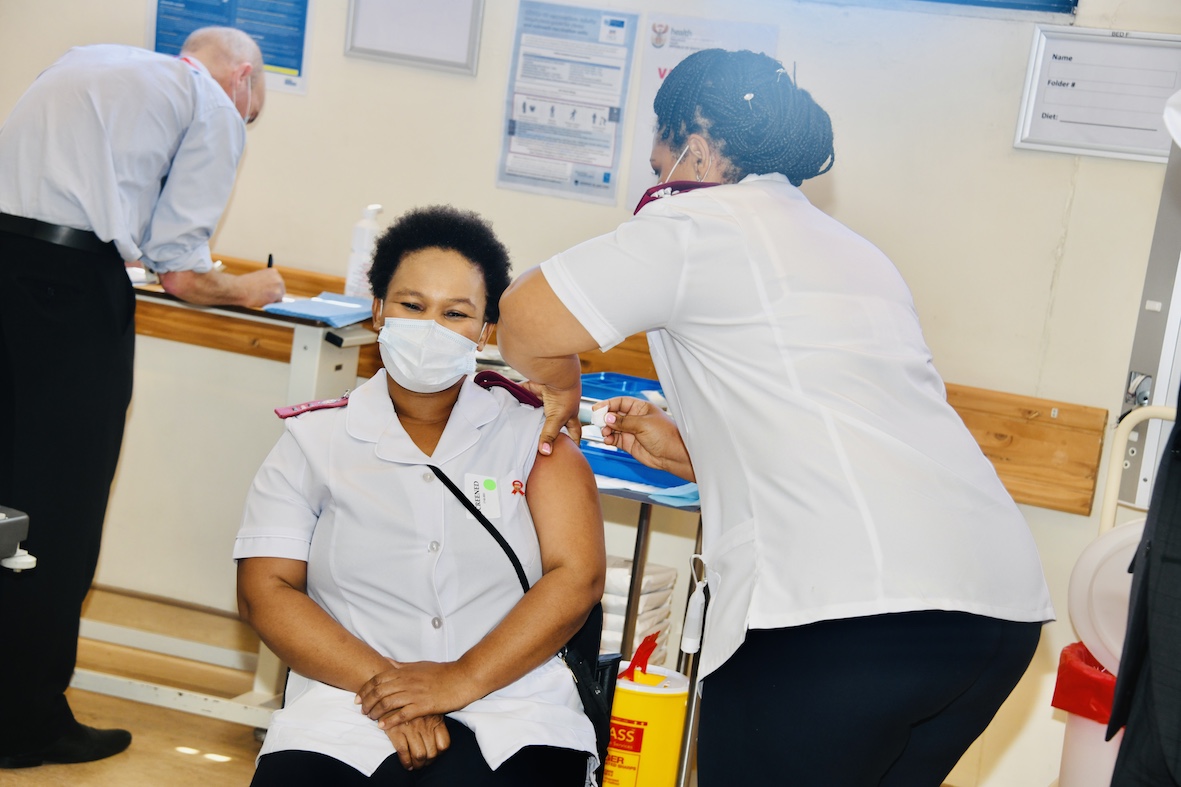 A nurse at Khayelitsha District Hospital became the first person in South Africa vaccinated against the coronavirus. Yet, as scientists and government officials race to inoculate other frontline workers, some health workers are suspicious of the vaccine.

The registered nurse became a part of history on 17 February 2021, when she allowed a dose of Johnson & Johnson’s vaccine against the coronavirus to be injected into her body.

As one of her  colleagues at Khayelitsha District Hospital administered the historic jab, Nurse Zoliswa Gidi-Dyosi became the first person in South Africa to receive a vaccine against the deadly virus. The moment, captured on camera, marked the South African medical equivalent of Neil Armstrong’s moon step: one small prick for Sister Gidi-Dyosi; one giant leap of hope for millions of citizens in overcoming a deadly plague.

The start of the vaccination roll-out signalled what is expected to be a turning point in the country’s fight against the Covid-19 pandemic. While South Africa has fared better than many other nations, it has still recorded almost 50,000 deaths and more than 1,5 million infections.

Scepticism on the frontline

Healthcare workers are the first to receive the doses provided by Johnson & Johnson, in a bid to protect those most at-risk on the frontlines. While Sister Gidi-Dyosa was prepared to roll up her sleeve to accept the jab, that same confidence is not shared by all in her field.

“For me, as a healthcare worker who thinks differently and more broadly, I would not promote the vaccine,” said Rivaaj Singh,* an ICU nurse who cares for Covid-19 patients in a KwaZulu-Natal hospital.

“I have taken many vaccines as part of my profession as a healthcare worker, but this vaccine is fairly new. We don’t know much about it.”

Singh’s doubt about the vaccine is linked to the murky nature of the virus itself. “Covid has not been in a medical curriculum, there have not been sufficient studies. It occurred and we are now handling it through trial and error. We are constantly chopping and changing.”

Vaccination has now started in 92 countries covering 75% of the world population. pic.twitter.com/cDhgbhmXFM

Virus strains are worrying some

Another factor driving Singh’s concerns is the various strains of coronavirus. The mutation of the virus discovered in South Africa, known as 501Y.V2, is believed to be more deadly than its counterparts. It prompted government to scrap implementation of the AstraZeneca vaccine, with doses already ordered and delivered, after tests showed that its doses had minimal efficacy against the variant.

“There are different strains of the virus and the vaccine’s efficacy has not been guaranteed against every strain. The virus is also mutating, with new strains being found around the country and around the world,” said Singh. “By taking the vaccine — introducing a live simulated virus into your body — you can develop a resistance to the other variants and produce an even more dangerous virus.”

“If you don’t understand the mechanics of a virus and you create a vaccine that only treats the little arms of the virus but not the centre, the virus keeps mutating,” she said.

“The vaccine that is currently out there has been proven to be effective against the first version of coronavirus, to some extent, but if you look at all the research that’s been done, it is actually not effective at all for the new strain. So why would you take it if you’re not sure that it’s going to work?”

Page’s question is echoed by Nkosazana Mahlangu,* an optometrist in private practice in Germiston. She feels the vaccine is a waste of time and money.

“If we still have a 100% chance of contracting the virus, then why take it?” she asked.

“I don’t see the point. I feel that there is no scientific evidence to prove that we need a vaccine for a disease that has an over-90% recovery rate. It makes no sense to me; I don’t see the logic in it.”

Mahlangu has shared her sentiments against the Covid-19 vaccine with those around her, resulting in fierce backlash.

“It annoyed me to see how fearful people were, how everyone seemed to be jumping on the bandwagon. I would tell people to use their minds and think out of the box. I have been called all sorts of names by colleagues and relatives,” she said. “I initially tried to convince everybody to think the way I was thinking, but now I respect their opinions and I expect them to respect mine as well, without attacking me just because I think differently.”

“Nobody will be given this vaccine against their will, nor will the vaccine be administered in secret,” the president announced.

A labour relations approach to vaccines

However, this approach could differ in the healthcare environment, according to labour consultant, Jahni de Villiers.

“While the National Healthcare Act states that for any healthcare to be administered, there needs to be consent, there is an exception when it comes to healthcare in the public interest,” she told Health-e News.

“It is likely to be argued that it is in the public interest to vaccinate healthcare workers, and so employers may choose to implement a mandatory vaccination policy if they so wish.”

Although the final say on introducing such a policy belongs to the employer, de Villiers encourages dialogue to allow employees to give input and raise any objections.

“You are not going to be able to please every single person — and it is also not required — but if you can prove broad consensus on such a policy, it can be implemented,” de Villiers advised.

Should a mandatory vaccine policy be enforced in the workplace, healthcare workers refusing to take the vaccine will have a difficult decision to make: “An employer will have to take a look at the healthcare worker that is on the frontline, who deals with patients every single day, and see if they can be accommodated in a different position. If the answer is no, then you’re looking at something like a retrenchment,” de Villiers said.

“An employer will need to follow the steps set out in Section 189 of the Labour Relations Act, which includes a re-positioning assessment. If it is found that all procedures were followed correctly and the employee is still dismissed with the compensation owing to them, it will be very difficult for them to prove unfair dismissal and they will not be able to claim reinstatement or further compensation.”

Some are prepared to resign

If mandatory vaccinations are imposed for healthcare workers, Mahlangu is prepared to forgo her career as a practitioner.

“I’ll have to go sweep the streets,” she jokes, before adding, “I feel very strongly [against the vaccine]. If there was another option to make a living, I’d take that.”

Singh, the ICU nurse, believes that the constitution will protect his right to refuse the inoculation—even while working in the frontlines.

“A vaccination is a preventative measure, not a life or death issue,” he says. “I have a constitutional right to refuse anything that I feel is against my personal well-being.”

According to de Villiers, however, it may not be that easy: “This particular argument regarding constitutional rights fails at an Employment Equity level, at an Occupational Health and Safety Act level, and in regards to the Protection of Personal Information Act. Your rights are limited in so far as they affect the rights of your colleagues, your patients, and the people around you.”

Healthcare workers may also have a responsibility to vaccinate with respect to the Hippocratic Oath, said Dr. Efrat Barnes. While running the child abuse clinic at Charlotte Maxeke Academic Hospital, Barnes contracted Covid Myocarditis and is now a life-long heart patient.

“If you are not going to get vaccinated, that is your decision,” said Barnes. “But you do then need to take extra precautions when it comes to protecting your patients because that is an oath that we have taken as a healthcare practitioner. We have promised to heal and not do any harm.”

Barnes also believes that vaccinating is the solution to stopping the mutations. “If you don’t vaccinate, the virus will continue to mutate and produce several variants; whereas when you vaccinate, you stop the virus in its tracks and prevent it from creating new lineages and mutations.”

Once the AstraZeneca vaccine was ruled out at the beginning of February, a team led by health minister Dr. Zweli Mkhize did all in their power to ensure that the Johnson & Johnson doses arrived as quickly as possible. While the official vaccine rollout has not quite begun, health care workers became part of the J&J implementation trial to make sure they were protected. Emphasising the importance, lead investigator on the J&J trial, Professor Glenda Gray, said, “Our healthcare workers cannot wait.”

To counter suspicions over the vaccine, Ramaphosa and Mkhize were among the first to receive the vaccine. By rolling up their sleeves, they hoped to demonstrate the safety of the vaccine.

Concern over being used as ‘guinea pigs’

Yet, the Young Nurses Indaba Trade Union feels that healthcare workers have been used as guinea pigs for the J&J vaccine. The vaccine has not yet been approved in countries like the United States and is still undergoing tests.

“Anything can happen because it might or might not be effective,” said general-secretary Rich Sicina. The union would prefer that the government focuses on infrastructure, human resources, and material resource, rather than the vaccine.

“We are seeing a government that thinks this vaccine is a magical pill that will solve our issues as far as Covid-19 is concerned,” said Sicina.

The latest study by Ipsos carried out at the end of January, shows that 61% of South Africans intend to get vaccinated against Covid-19. When the issue of mandatory inoculations was raised, the result was far more evenly split, with 47% in favour and 50% against.

“I understand that people have a right to decide what to do to their bodies, but I also think we have a right to protect those who don’t have a choice,” said Andi Bengis, an occupational therapist at Rand Hospital. Bengis has seen the effects of so-called anti-vaxxers, a growing number of people around the world who oppose vaccinations.

“A friend’s son died last year from measles as a result of anti-vaxxers. There were kids at his school who had not received the measles vaccine, and here was a boy who had a chronic illness and couldn’t be vaccinated. He got infected and died,” she recalled. “It’s the same for the Covid-19 vaccine — if someone is around a person who is really at risk for coronavirus and they refuse to get the vaccine, that is not fair.”

Sister Gidi-Dyosa inscribed her name in the annals of history as she sat surrounded by politicians and colleagues, all of whom were waiting for their own vaccines. It remains to be seen, however, how many of her fellow healthcare workers will choose to follow her path.—Health-e News

*Not their real name