Home » News Articles » One year of Covid-19 in SA: ‘I don’t wish anyone to go through what I went through’

In the year since the coronavirus was recorded in South Africa, more than 50,000 people have died and the country has been profoundly affected. Health-e News spoke to survivors of Covid-19, and those grieving the loss brought by the pandemic.

One year of Covid-19 in SA: ‘I don’t wish anyone to go through what I went through’

Just over a year ago, the first Covid-19 case was reported in South Africa on 5 March 2020. Thousands have died. Millions have been infected, and most have survived.

Survivors from Limpopo province, and the loved ones of those who tragically died, told Health-e News their stories. Their experiences revealed the coronavirus’ ubiquitous impact on nearly every aspect of our lives – scarring families physically, financially and emotionally.

‘This virus is real’

“I couldn’t breathe on my own for several days and that made me realise that this virus is real, and a person can actually die,” said Fhulufhelo Magosha from Dididi village outside Thohoyandou.

In the first week of January, as South Africa experienced a second wave, the 36-year-old primary school teacher, started to feel sick. He had a headache and was running a fever. Initially he thought it was just flu, but days later on January 5 he started struggling to breathe and his wife rushed him to hospital.

“When I used to read reports of people dying from this virus I used to think that people were lying but since the day I landed on that hospital bed, I now understand that this Covid-19 is real,” he told Health-e News.

Magosha was diagnosed with Covid-19 and admitted to Mediclinic Muelmed private hospital in Pretoria, where he lives and works. Unable to breathe on his own, doctors placed Magosha on a ventilator for several days. He spent just over a week at the hospital before recovering from his illness.

“Though I have now fully recovered from this virus I will never forget the ordeal I went through. It was too much. At one stage I thought I was going to die, but thanks to God, I managed to recover fully,” said Magosha.

Not so mild symptoms

Only a fraction of people who contract Covid-19 need to be admitted to hospital. Those with mild symptoms can recover at home, but survivors told Health-e News that even milder Covid-19 illness is not necessarily mild at all.

Also diagnosed with Covid-19 in the first week of January, Anwani Mamburu told Health-e News that she would “not wish anyone to go through what I went through – not even my worst enemy.”

Mamburu, a mother of two, said that she suffered severe headaches, loss of appetite and fever before she was diagnosed with Covid-19. 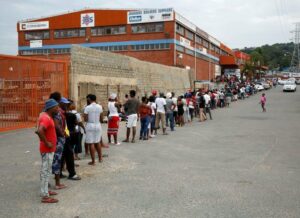 “The headache was just too much, and I couldn’t cope anymore, that’s when I decided to seek medical help and I was tested and diagnosed at a private doctor,” she said.

Mamburu not only suffered physically, but also emotionally. While she was grateful her husband and children didn’t contract the virus, the isolation of self-quarantine at her home in the rural Mashamba village outside Louis Trichardt took its toll.

“It was a painful experience not being able to sit in the same room and socialise with my family in fear that I might infect them,” she said. “The emotional trauma we both went through was too much.”

Even then, some people in her community still believe the coronavirus does not exist.

“I wish people could take this virus seriously. This virus is real and dangerous. The sooner we take it seriously the better,” she said.

Pleasure Hlungwane, 35, a single parent and police officer from Phalaborwa, echoed Mamburu about the emotional turmoil he experienced while he was sick.

Hlungwane tested positive for the coronavirus in July 2020 after his private GP referred him for a test. His initial symptoms were mild and he said that he “was just not feeling well in my body.”

“I didn’t understand it because I was not feeling any pain. But the following day I came back to my senses and I started panicking, especially when they were announcing the increasing number of Covid-19 death cases and when I started feeling very sick,” he told Health-e News.

Hlungwane defeated the virus at home in self-quarantine for three weeks.

“I spent three full weeks in the house depressed and waiting for my turn to die,” said Hlungwane.

Fortunately, he survived and his five-year-old daughter still has her father to look after her. 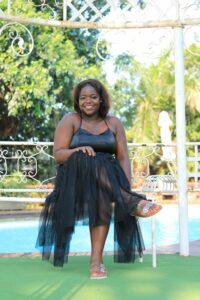 Umpha Sadiki is trying to stay positive as her family faces loss. (Supplied)

Other families weren’t as lucky. For 19-year-old Umpha Sadiki, Covid-19 has left her family emotionally and financially bankrupt, after breadwinners succumbed to the disease.

“I lost family members whom I had hoped that they would be with us for a very long time but Covid-19 has robbed us of a lot,” said Sadiki. “The worst part is that they were both bread winners in their respective families.”

Sadiki, a law student at the University of Venda, said after the double loss her family faced a “financial crisis” from which they are still recovering.

A woman from Topanama village outside Tzaneen spoke to Health-e News on the condition she remain anonymous because of the stigma she and her family faced from Covid-19.

In January this year, she and nine other family members tested positive for Covid-19 after initially thinking it “was just flu”.

The unemployed mother of a three-year-old boy said she “had a sore throat, headache, I lost my sense of smell, and the body pains I had were so unbearable.” The 29-year-old also “struggled to breathe” and said “it was difficult for me.”

“I was so scared, especially for my 70-year-old mother,” she said.

Older persons are more at risk of experiencing severe Covid-19 symptoms, of being hospitalised and of dying.

“When I told my mother about the results, she was so calm about it and later [my family members] all went to test and they all tested positive although, thankfully, my mother didn’t show any symptoms,” she said.

But surviving the experience has affected her profoundly.

“I have learnt to appreciate the little things in life and never take things for granted – even little things like being hygienic. Something as simple as washing hands will not only save you, but the next person.” – Health-e News