Home » ‘Necessary,’ ‘terrible’ and ‘confusing’—Health workers on the frontline react to the J&J vaccine rollout pause 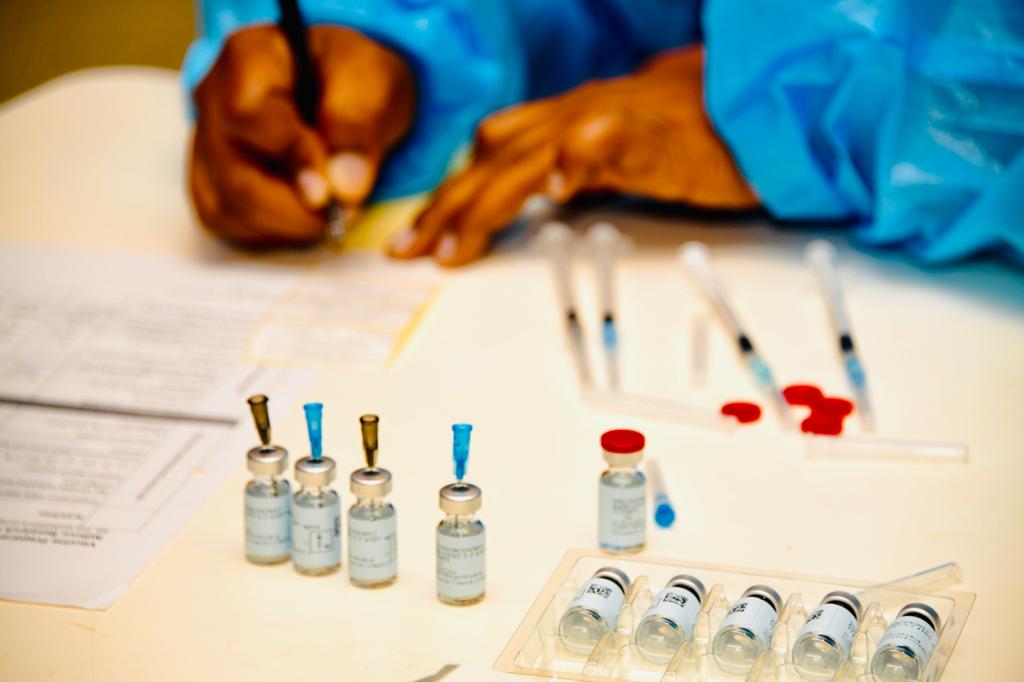 In this special report, Health-e News spoke to healthcare workers and experts in all nine provinces to get their reactions to the suspension of the COVID-19 Johnson & Johnson (J&J) vaccine amid safety precautions. Sixteen of the 20 we spoke to already received the jab and this is what they had to say.

“At the moment I am trying my best to stay calm and not panic,” said 31-year-old Irene Sithole, a professional nurse working in the Northern Cape. “There is a possibility that there is nothing wrong with the vaccine, but at the same time I am also scared that, should there be something wrong with the jab, we have already received it and are in trouble.”

Sithole is one of the nearly 290,000 healthcare workers who received the now halted Johnson and Johnson vaccine against COVID-19 as part of the Sisonke implementation study. This week in the United States, the Federal Drug Authority paused the rollout of the vaccine after six women suffered blood clots after receiving the jab. One woman died, while another is in critical condition, authorities said.

In his statement, Mkhize said he believed the pause would only last a few days as scientists reviewed the data from the US cases. The South African Health Products Regulatory Authority (SAHPRA) said it met with the Sisonke study team and the manufacturer Janssen Pharmaceutical) earlier this week.

“SAHPRA was provided with updated data on the Sisonke study. Further data are being obtained from the manufacturer and the US FDA,” the authority said in a statement.

The cautionary pause of an already slow rollout campaign, has been met with mixed responses from the healthcare workers first in line for the jab.

No need to panic

“There is no need to panic,” said Professor Helen Rees, who is the chairperson of SAHPRA. “Over 290,000 healthcare workers have already received the J&J vaccine in South Africa and nearly seven million have received it in the US.”

Speaking to Health-e News, Rees urged the public, particularly vaccinated health workers, to remain calm because the still unproven risk of side-effects outweighs the potential damage of a getting sick with COVID-19.

The data collected and analysed so far as part of the phase three Sisonke study, through which the J&J vaccine is being rolled out, has not shown any similar effects to those recorded in the US.

“Firstly, we don’t know if there is any association [with the blood clots] and the vaccine and secondly, if there was a link made, it equates to less than one case per million people which makes it extremely rare,” she said.

As the J&J vaccine rollout is part of a clinical trial, the ethics committee and SAHPRA agreed to temporarily suspend use of the vaccine to “really just be cautious.”

“We’re talking to the FDA, the World Health Organisation as SAHPRA to get a better sense of this information. We’re hoping for this to happen in a matter of a few days because we don’t want this to delay the rollout,” she said.

Reactions from the frontline

“I received my jab few weeks ago and I never experienced any side-effects. So far, I have never heard of anyone in South Africa who became sick or developed any condition after receiving the jab. My only worry now is that this will only delay people from getting their COVID-19 jabs” said Tahulela Patience Lehaha, an oncology nurse at Polokwane Provincial Hospital in Limpopo. “And the jab is the only way one can be sure that he or she has a better chance of not getting infected with this virus which has already claimed the lives of so many since the start of the pandemic.”

Tebello Olga Sithole, a nurse at a private pharmacy in Sasolburg in the Free State who received the J&J vaccine in March, said the suspension was “unfortunate.”

“My view is that all vaccines or medications have their adverse effects and looking at the large number of people who have been vaccinated, it’s only a handful who presented with this problem. I went to get vaccinated knowing the slight risks involved,” she said.

Nonceba Mofu, a nurse at Livingstone Hospital in Gqeberha, said that the news of the temporary suspension has left her simply feeling “confused.” Others like Mbulelo Schultz, also a nurse in Gqeberha is “not worried at all” about the suspension or the safety concerns.

Dr Strike Stevens Mabasa was vaccinated in February. A general practitioner in Bethlehem in the Free State, Mabasa welcomed the regulators’ caution.

“I for one believe that it’s a good move by [SAHPRA] to temporarily suspend the vaccination pending new information that will come to light,” he said. “Most people might regard six people out of seven million people vaccinated presenting with clots as insignificant but a precautionary approach is prudent.”

Emilia Moloi, who has been a nurse at the Tygerberg Hospital in the Western Cape for five years, said she was “disappointed” that the vaccine rollout was paused but agreed with the decision.

“I believe that it was necessary for the government to pause the roll out of the J&J vaccine temporarily, but I am concerned about the many workers who still need to get vaccinated,” she said.

Ntombifuthi Nhlapo, a lay counsellor who received the J&J jab last week based in Mpumalanga said the suspension was a “good thing”. Cebile Madonsela, a clinical associate also from Mpumalanga, received the J&J vaccine earlier this month and is less sure than Nhlapo.

“I think they did well with suspending the vaccine for now but I worry it will cause fear amongst the public and health workers,” she said.

Professional nurse and COVID-19 vaccinator at Tembisa Hospital in Gauteng, Kgabo Mashala, said the suspension was “necessary,” worried about the risks associated with the delay.

“I think that the suspension is good because we need to follow precautions but I am concerned that it will further delay the rollout and there are high risk people who need the vaccine. People like the elderly, those with comorbidities and those with compromised immune systems,” said Mashala.

She pointed out that since “we don’t yet have evidence that the vaccine is responsible for the clots, we should wait for the report confirming the cause. Plus we also don’t know their medical history or what type of medication they might have been taking.”

Professor Francois Venter, former senior member of the COVID-19 Ministerial Advisory Committee, said suspending the vaccine rollout, even for a matter of a few days, was a “terrible decision.”

Venter, head of the Ezintsha Health Unit at the University of the Witwatersrand,  has also received the J&J jab. He said “the South African vaccine programme is in a very poor state.”

“We’ve vaccinated 300.000 highly motivated health workers in eight weeks. But to hit government targets, we need to be achieving those numbers every day. And that’s if vaccines are delivered in time. It’s a crisis,” he told Health-e News.

Thabani Nqadu who works in at the Far East Rand Hospital in Gauteng, fears the decision will create confusion and doubt about the safety and efficacy of the vaccine.

“I think the suspension of the vaccine has caused more confusion, fear and lack of trust in our health system,” said the 28-year-old who was vaccinated with the J&J jab in late March.

“I think they should have continued with the rollout of the vaccine as we don’t have blood clot cases here in South Africa,” said Mokoena. “From my point of view, even if there was proof of a connection, it’s only six women out of seven million people, which is not such a big deal if you consider how extremely rare that is.”

Tlhompo Magabe, a nurse from the Mahikeng Provincial Hospital in the North West was vaccinated with the J&J vaccine earlier this month. She hoped the rollout would continue to protect her colleagues who have not yet been vaccinated and are still exposed to the coronavirus.

“This vaccine has put our fears to rest because as frontline workers we are exposed to the virus every time we report for duty,” the 30-year-old nurse said.

“My view is the decision might have been premature. The [small risk, if any] far outweighs the catastrophic effect of COVID-19. The rollout should have continued,” he said.

Kubheka, who made news in 2018 when he graduated as a doctor at the age of only 20, said that “we’re doing so badly in terms of the numbers vaccinated and are lagging behind a lot of countries at this stage.”

“We haven’t reached the third wave yet. Before it comes we need to have vaccinated enough people. This decision was made based on an international body and my view is that it is not the correct decision for our own context,” he said.

Dean of Medicine at Wits University, Professor Shabir Madhi said the pause is appropriate in a clinical trial setting. Still, South Africa shouldn’t react so quickly and without question to the decisions made by regulatory bodies of developed countries.

“The pause of the JJ vaccine in SA where it is being used as part of a clinical trial is justified in that investigators need to update the consent form to alert the volunteers of this newly identified potential safety concern,” explained Madhi, who headed the Novavax and Oxford-AstraZeneca trials in South Africa. “However, the same does not hold true when used as part of a roll out program, where such risk can be communicated differently and the decision on the use of the vaccine needs to also consider the a risk benefit potential at an individual and societal level.”

“Also, while it might be an option to pause vaccination with a particular vaccine if spoilt for choice with the number of vaccines that are available, this is unfortunately not the case for countries which have limited options of the number of Covid vaccines that are available,” he said. “Hence, the decision making should also be guided by the local context. We need to guard against knee jerk reactions to decisions made by other regulatory authorities – which might be applicable to their setting, but not necessarily generalisable to our setting,” said the former head of the National Institute of Infectious Diseases.

“The risk of the identified side effect is just under 1 in a million for the JJ vaccine. In contrast the risk of developing the same condition in people with COVID is 14-66 fold higher,” he said . “The risk of dying from COVID-19 in SA right now is excessively higher than developing the type of side effect that is being investigated.”—Health-e News