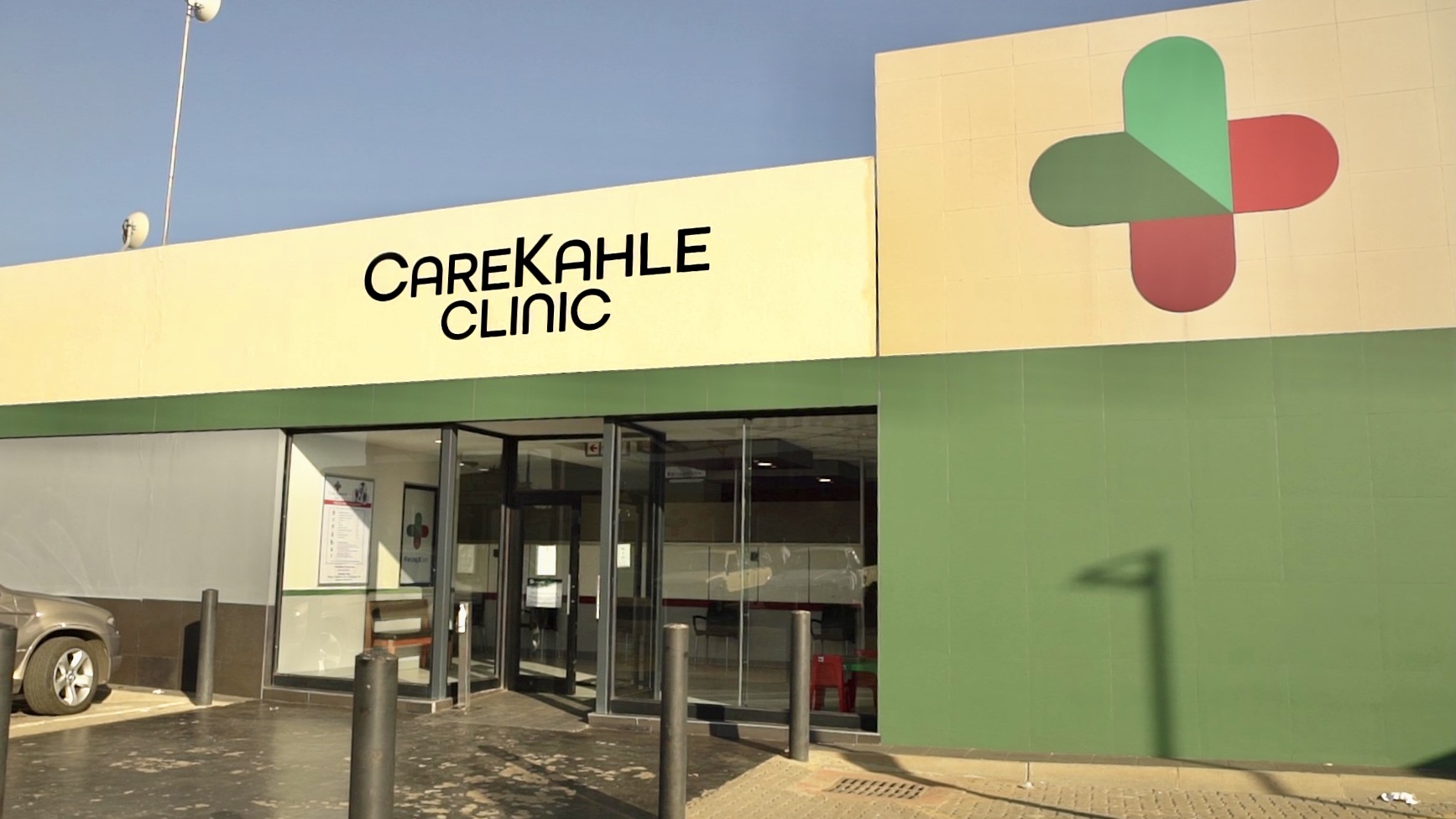 Mondays are often busy at the CareKahle Clinic in Orange Farm where patients can seek medical care at a rate that aims to care for their pockets as well.

CareKahle is positioned as a midway point between public clinics that offer free service but poor efficiency, and private hospitals where turnaround times are quick but the fees are unaffordable for most citizens.

Located 45 kilometres from Johannesburg, the informal settlement of Orange Farm is one of the largest in the country and almost 77,000 people call it home. The township is a flurry of activity, with entrepreneurial residents going in and out of hair salons, bakeries and spaza shops.

Among these businesses serving the community is the CareKahle clinic. A logo consisting of a green and red medical cross announced the clinic, which is housed in what used to be a fast-food drive-thru. Opened six months ago, this is the second clinic in a concept that is the brainchild of 33-year-old Ilan Shapiro. The first, in Alexandra north of Johannesburg, has successfully operated for over two years.

Inspired by a personal experience

“In my previous business, one of my employees was sick and I told him to go off to the local clinic. It was just a terrible experience,” Shapiro recalled.

“I remember phoning him at 9 o’clock in the morning to ask him what the doctor had said and he told me he had not been seen yet. At 11 o’clock I called again and he still hadn’t been seen. I phoned him at 1 o’clock, he still had not been seen. At 4 o’clock, I phoned and said, ‘Isaac, what did the doctor say?’ He told me that he hadn’t been seen and that they had cut the line so he had to go back the following day. I was horrified — this man was unwell and had been waiting since the early hours of the morning for medical care,” he said.

Even when Isaac was seen, the service he received was not good. Shapiro then took him to his private GP where Isaac was seen by the doctor, received antibiotics, and was on his way. The entire process took less than 30 minutes. The experience, common to millions of South Africans, was enough to inspire Shapiro to open the CareKahle clinics.

“You must wake up at 5 o’clock to go there,” says Mavis Nkwe who has brought her two-year-old granddaughter to CareKahle to be treated for flu.

“Those other clinics have long lines that you have had to wait in while you are feeling sick. I am scared of those lines in the sun. You cannot stand for such a long time in those queues when you are sick,” she said.

Nkwe decided to bring the toddler to CareKahle after she herself came for treatment a month before.

“My body was painful, my joints were so sore. The medication that they gave me was good for me. The staff here are so patient. You know, when you are sick, you get angry, but the workers here understand,” she said.

As the receptionist at the facility, Lindiwe Nokwazi is the first person whom the patients see.

“Some patients are kind, but some are rude and impatient. My role is to welcome them and understand what they are here for; to explain to them what to expect within the facility,” she said.

The staff have made a concerted effort to alleviate the queue issue which patients are used to at other facilities.

“Even when there is a queue, it’s not a long queue. Our doctors will actually push the queue so that patients will be assisted on time,” said Nokwazi.

According to the receptionist, the attitude towards the patient comes from the top.

“Our bosses are good to us and then we have a happiness that we give to the patient. When the patients walk in, they are always welcome. They see us happy and we just offer good service,” she said.

The doctor is in

The clinic offers a range of services, including a dispensary where patients can fill their scripts after being seen by the doctor, as well as a procedure room where wounds are stitched up, skin tags are removed, and circumcisions are conducted. CareKahle even offers sonar scans for expectant mothers. The majority of the patients, however, come seeking a consultation with the doctor on site. 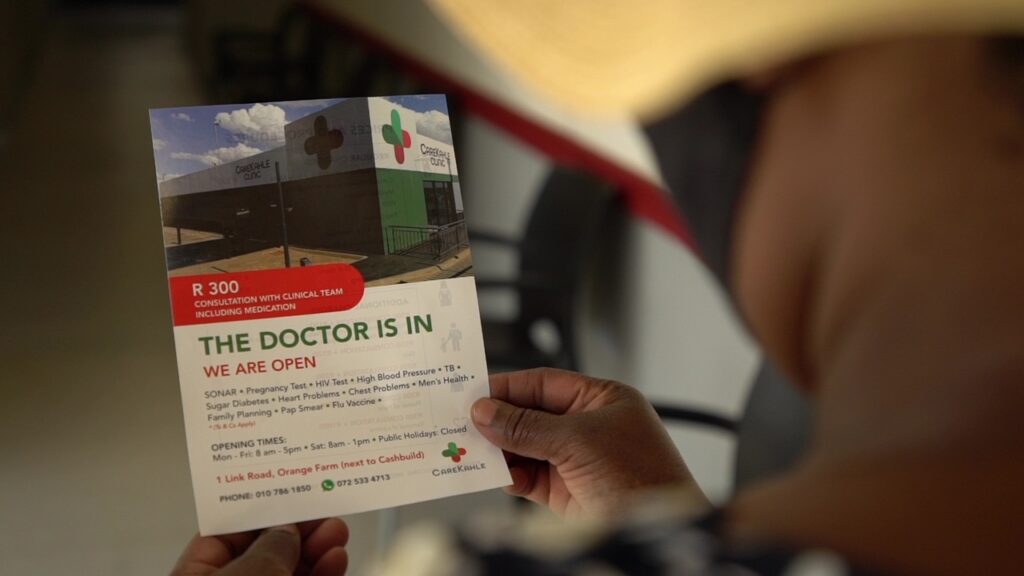 How CareKahle gets the message around the community. (Sasha Star/Healthe News)

Patients also learn about the services via a pamphlet that announces in bold green letters:  “The doctor is in.” A R300 consultation with the clinical team, including medication, is advertised at the top. There is also a WhatsApp number patients can use to contact the clinic.

In the two months she has worked at the Orange Farm facility, Dr Ntebo Mogashoa has seen a host of primary healthcare issues, including urinary tract infections, gastroenteritis cases, and patients with high blood pressure. She believes that the clinic is alleviating an overburdened public healthcare system.

“It is overwhelmed. Especially with the ongoing pandemic that has exposed some gaps in the healthcare system. That’s where CareKahle fits in. We are trying to accommodate patients who are really seeking care — and quality care. Patients need to feel like we care about them, like we understand what they are going through. And that is what we offer here.”

Shapiro, the founder and operations director, echoes this sentiment.

“We offer low-cost, affordable healthcare within the townships, but at the centre of it, care. It’s underpinned by care. Care from quality doctors, quality medicine, short waiting times, and caring about the patient’s wallet. The unfortunate reality is that not everyone has the funds to pay what doctors cost today, and within the location we try to fill that void.”

Dorah Masiledi, who is waiting to be seen by the doctor, is happy to use her money to look after her health.

“I’m an educator, I teach little ones, so I cannot queue at the public clinic all morning,” the 57-year-old tells Health-e News.

“If you have money — not that you are rich — but if you have money, you must use your money to look after yourself. Sometimes ‘free’ doesn’t work. Your health comes first.”

The convenience of CareKahle is the main reason that the grandmother of four has chosen it ahead of other healthcare facilities.

“I’m coming from work, and now it is the afternoon but I know I will still find the clinic open. I know the doctor and nurses will still see me. I don’t have to rush,” says Masiledi.

Nompulelo Masangwe’s one-year-old son sits at the child-size table and chairs in the corner of the waiting room. In the past, she’s come to the clinic for her own treatment, and today she hopes doctors will treat her child’s diarrhoea.

“The place is so clean and it is more affordable than seeing a private doctor,” said the 20-year-old. “I used to go all the way to Johannesburg to see the doctor, so CareKahle is saving me a lot of transport money. Other private doctors charge more, and then the medication is extra, but here it is all together.” 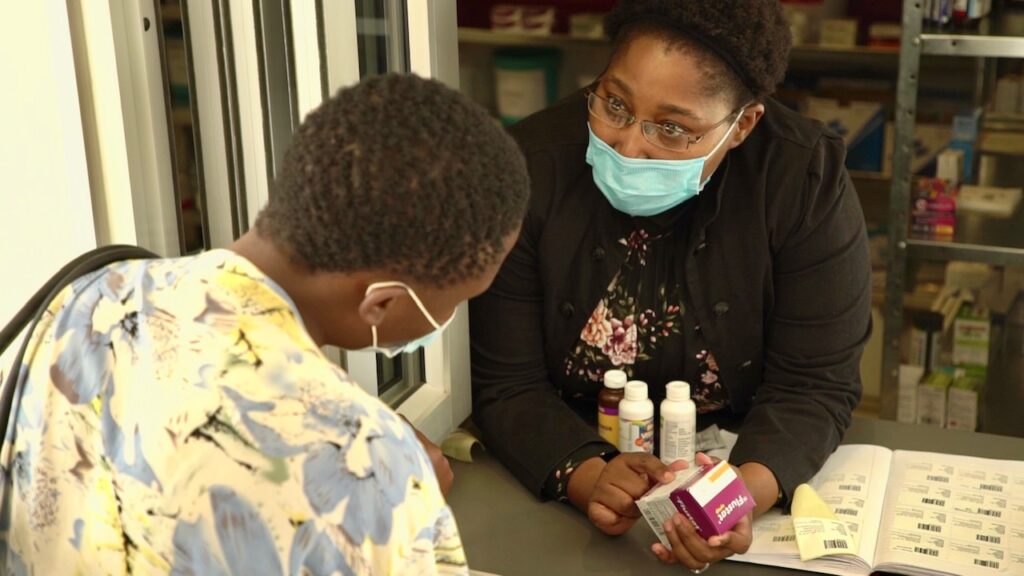 “Sometimes you can find that the sisters at the public clinics are so rude. They will tell sick people that they smell, that they should wash before coming to the hospital. Or they will shout so loud that everyone waiting knows what medication you are getting. It can be very embarrassing, you know? Here, the doctor will even lower her voice while explaining my medicine to me,” she said.

“Our plan for the future is to try open more facilities in the locations where it is needed,” said the clinic’s founder Shapiro.

“But overall, to keep every patient within our existing facilities, and further facilities, happy. We value every single patient and our priority is to deliver on quality, proper care, to give them a good, efficient experience when they come.”

Dr Mogashoa believes that the business model is working.

“I think there are sometimes attempts made to undermine people, to say they cannot afford to pay outside the public service, but there are patients who need a quicker service. They cannot afford to wait in long queues and they want to be seen as they come into the clinic. At CareKahle we aim to do that for them.”— Health-e News