Home » Vitiligo: Uncomfortable in their own skin 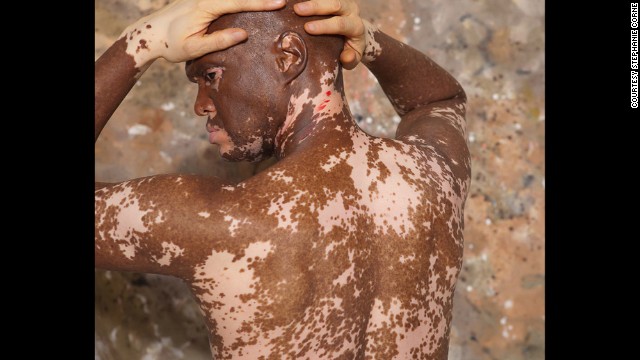 No place to hide: Vitiligo sufferers share their stories of anguish.

There is no escaping vitiligo – a skin condition which cause millions torment and pain in a world where knowledge is minimal and speculation rife.

Many people who initially show symptoms of vitiligo, try various medications and treatments with some even resorting to traditional rituals with the hope the skin condition will disappear. But with no signs of clearing, these individuals often end up depressed, experience anxiety, have low self-esteem, isolate themselves and some even contemplate suicide.

According to the MyVitiligoTeam website, vitiligo is described as a skin condition that causes the loss of pigment which appear as lighter patches of skin called macules. They can be white, pink, red or brownish in colour and can be widespread or affect smaller areas of the body.

Thathokuhle Gabuza, 20, from Ladysmith, noticed a change in her skin condition at the age of 12.

“I started to lose skin pigment and noticed the sudden appearance of pink patches on my fingers which had spread. As a 12-year-old, I was so stressed and started asking myself questions. At the time, not many people knew about vitiligo or had seen anyone else with the condition so it was difficult to explain to people who asked me about it”, said Gabuza.

People would ask Gabuza all kinds of weird questions and would often speculate as to why she had this condition.

“Some would say it’s because I eat too much tinned fish. Others suggested my parents should have traditional rituals performed on me since the ancestors were responsible for my condition,” she added.

To make matters worse, children at her school would joke about Gabuza and make nasty remarks. “They would say I’m half an albino, a monkey, a blessed sheep and even half-white. They’d call me these names and then laugh.”

School became hell for Gabuza who had suicidal thoughts, withdrew from group activities, often isolated herself and made excuses as a coping mechanism.

Even now, she finds it hard to socialise due to people’s reactions upon meeting her.

A MyVitiligoTeam study confirmed that the skin condition contributes to a lower self-image and a general lack of confidence. Individuals may also hide their depigmentation with clothing and make-up.

Parents can play a supportive role

Dr Lisa Schuster, a paediatric psychologist, says parents can play a big role in supporting their children and teens by proactively educating themselves about vitiligo. This will help them to explain the condition and help the children feel at ease. It’s also important that these children get to express their feelings when the need arises. Schuster also emphasised the importance of educating those around their children especially when entering new environments or interacting with strangers. This will help avoid social stigmatisation and allow kids to fit in more easily.

*Sizwe Manqele, 42, recalls how difficult it was for his girlfriend when she saw he had vitiligo on his penis.

“When we first became intimate, my girlfriend, now wife, was concerned that the condition could affect her womb or baby when pregnant,” explained the Durbanite.

After doing some research, Manqele explained that vitiligo isn’t contagious and the couple now have two “wonderful” daughters after 11 years of marriage.

Gabuza, who has finally accepted she has vitiligo, believes people should be more aware of the skin condition which often attracts plenty of myths.

“Most people believe that we are half albinos and that we have a shortage of blood,” said Gabuza.

“They also believe that we should stay indoors on sunny days because this is when it might spread further.”

She said some even went as far as to say that the ancestors have been upset and to make amends, a cow or goat must be slaughtered. Having lived with the condition for eight years, Gabuza has decided to adopt a positive outlook and chooses to ignore all the negativity.

Manqele hopes that the media can play a bigger role in informing people about vitiligo as well as encourage those who have made peace with it, to come out and share their journeys.

According to the United-States based medical research organisation, the Mayo Clinic, no drug can stop the process of vitiligo. But there are some drugs which can be used alone or in combination with light therapy which can help restore some skin tone. Results may vary and some treatments may have serious side effects. – Health-e News