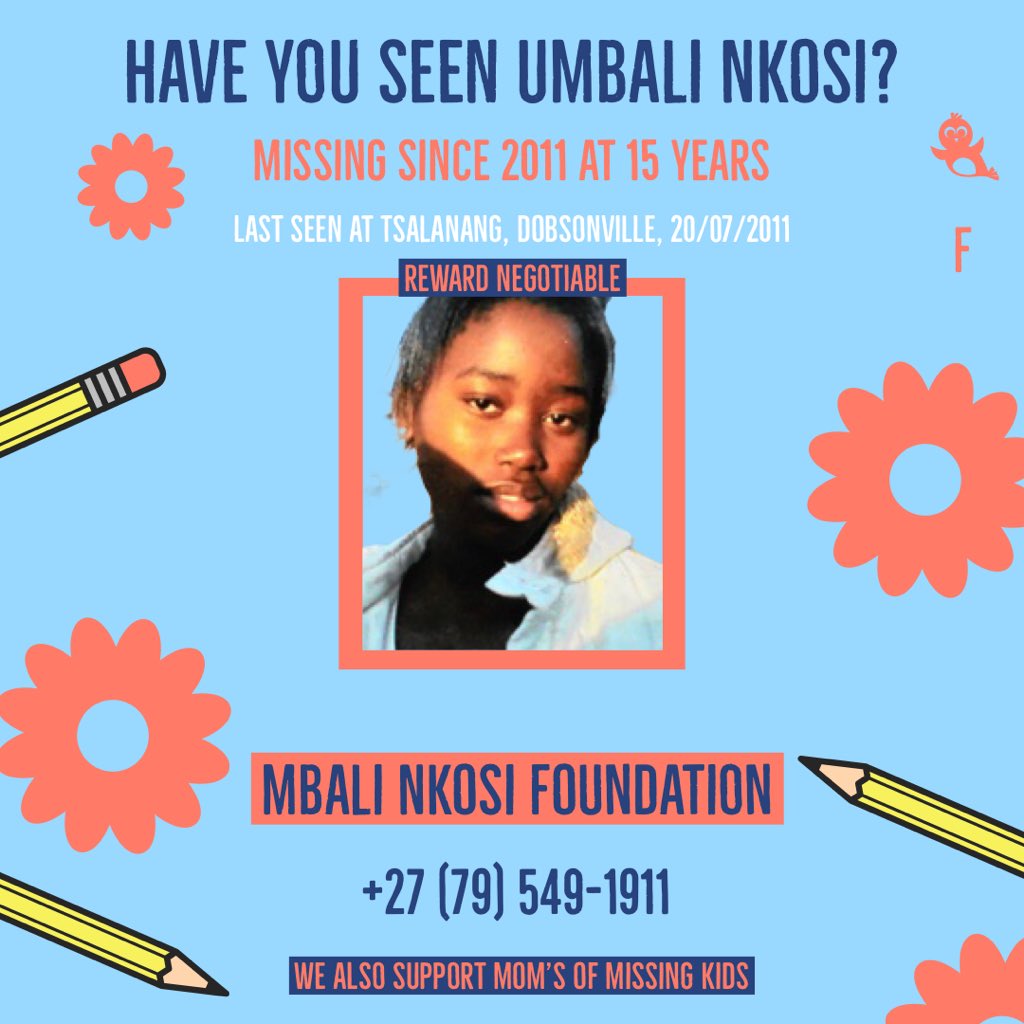 It’s been a decade of despair for Zodwa Magwayi whose daughter went missing ten years ago. The family has launched a foundation to not only bring attention to missing children but also offer support to families going through similar ordeals.

Mbali Nkosi’s mom – who lives in Dube Village in Soweto – reflected on her daughter’s disappearance and said her life had changed forever since that day in July in 2011.

“I received various ‘Please Call Me’ messages from Mbali while I was still at work,” explained Magwayi.

“As soon as I answered her call, I could only hear the word ‘mama’ among all the unclear noises in the background. When I got home, I heard that Mbali had left to do an errand at a local shop,” she added.

Magwayi said her child didn’t have many friends and enjoyed watching television so she was surprised when the 15-year-old failed to return home that night.

A search party was soon organized and witnesses also came forward confirming the identity of a male suspect.

Mbali’s mother said the family went to open a case at the police station but an investigating officer was not allocated to the case. They then visited the suspect’s home in Orlando West where his family informed them that he had relocated. The police were subsequently informed.

With weeks flying by, the Nkosi family continued to search and attempted to trace Mbali’s whereabouts in conjunction with the police who were unable to search the suspect’s house.

With the case turning cold, something finally surfaced three years later in the form of a phone call from an official with news that the suspect had been arrested. Much to Magwayi’s horror: “This was shocking to me because the magistrate who was presiding over the case confirmed it had never been brought to their attention,” she explained.

Magwayi is appealing to the Department of Justice to step in and help the family in finding closure. She said until now, nothing has come to light in terms of any legal proceedings.

“We are struggling to find closure because until now, we have no answers of my daughter’s whereabouts. I’ve since been diagnosed with clinical depression as a result of the secondary victimisation and inaction from the South African Justice system,” said Magwayi.

The Nkosi family have set up several social media pages – Twitter, Facebook and Instagram – in anticipation of the launch of the Mbali Nkosi Foundation which will take place from 19 to 21 July.

Ntsoaki Pali, coordinator for the Mbali Nkosi Foundation, said she hopes other families can benefit.

“The foundation will serve as a supporting structure to other families who have missing children in terms of rendering services such as counselling,” said Pali.

She also called on men to become involved as South Africa fights the scourge of gender-based violence.

According to Missing Children South Africa (MCSA) a child goes missing in South Africa every five hours with only 77% eventually found. Mbali sadly forms part of the remaining 23% – who are either never found, trafficked or found deceased.

The MCSA insists parents and families should never wait 24 hours before reporting a missing child.

“Human trafficking is a broad spectrum. Yes, we do deal with human trafficking in South Africa. I’m unable to comment on whether we are facing a crisis or not but I can tell you that SA has a high number of cases,” said van Aswegen.

She explained that even when a case goes cold, the missing person case always stays open.

“We, as an organisation, have #StillNotFound flyers that we repost of cold cases with the hope that someone somewhere will forward with information”.

For the Nkosi family, any news, good or bad, will be welcome at this stage. – Health-e News