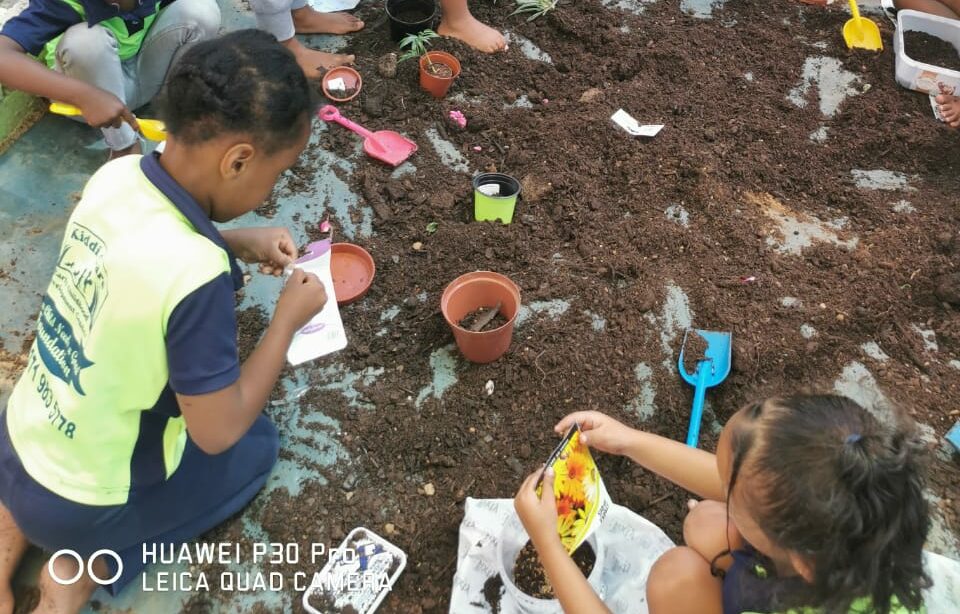 Trying to get children to form healthy eating habits from a young age is a major challenge faced by parents and teachers alike. But an Early Childhood Development (ECD) educator, believes that the younger kids are when introduced to a healthier lifestyle, the better – and it doesn’t have to cost a fortune.

Palesa Mojapelo runs two ECD centres in Johannesburg South where she teaches her learners to embrace healthy eating right out the blocks and they’ve never looked back.

“I believe that introducing healthy living to children at a young age will make them better adults and healthy eating is cheaper even though a lot of people say it’s expensive,” said Mojapelo who juggles her time between the centres in Ormonde and Soweto.

Her love for children eventually took first place leaving a career in marketing behind. Being a mom of three also ticked all the right boxes when a decision had to me made which saw education come out tops.

“I grew up in a home where I was the only child and I’ve always loved being around children,” said the 37-year-old who has an ECD level 4 qualification and a BEd degree from UNISA.

“I would often work late and wished there were pre-schools which catered for parents who worked late,” she explained.

Her late nights at the office inspired her to start Kiddi Care 24/7 which initially catered for sleepovers, but once the business grew, it became a day school for both ECDs.

Healthy eating: Winning the little ones over

Dealing with little people and convincing them to eat vegetables was never an issue for Mojapelo.

Having their own vegetable garden definitely helped open their eyes to see how veggies come from the ground and end up in a pot.

“For them, this experience was exciting. To see vegetables starting off as a seed to growing and then being cooked. I would advise parents to do the same at home so that they are part of this learning experience,” she added.

Mojapelo says their ECD menu is approved by the Department of Health who visit the school twice a year unannounced to check whether the school is serving nutritious meals.

The earlier the better

“If a child is exposed to food and nutrition insecurity, it threatens their development across their life course. This contributes towards an intergenerational transfer of malnutrition, poverty and poor health,” said Pezcak.

She further explains: “The 2020 Global Nutrition Report (GNR) highlights the need to intervene early to prevent the double burden of both undernutrition and obesity. This double burden of malnutrition contributes to diet-related non-communicable diseases (NCDs) such as diabetes and cardiovascular disease.”

According to Peczak, food gardens at ECD centres can supplement children’s nutrition and educate learners as well as generate income. Stipends for gardeners through the Expanded Public Works Programme (EPWP) can be beneficial.

“School gardens can provide school children with fresh produce which makes them less likely to consume high amounts of processed, nutrient poor and energy dense foods that places them a risk of being overweight and developing NCDs later in life,” said Peczak.

Mojapelo believes in combining fun with facts especially with tots.

“Vegetables also have different colours and each vegetable has a role to play in a child’s body. So, we tell them that if they don’t eat their carrots, they will not be able to see properly and will not become big and strong,” explained Mojapelo.

“We make sure we incorporate fun into the healthy eating aspect”.

She is also very keen on her kids keeping active through physical education sessions every week and encourages parents to do the same at home.

The proof is in the pudding

Nobantu Mkhize, a parent at Kiddi Care 24/7, said she was impressed when her 3-year-old chose vegetables over sweets at home.

“About a week or two after my child first attended Kiddi Care, I remember giving her sweets and she boldly told me that she doesn’t eat sweets and prefers vegetables and fruit. I was beaming with pride and figured she had learnt that at school,” said Mkhize.

Mojapelo says nothing fulfils her more than knowing she has impacted the growth of a child.

“Just being around these little voices who are always happy, warms my heart. Seeing every child grow is priceless. You become amazed when you see how shy children are in the beginning. But over the months, they become confident – it’s like watching a flower fully blossom,” she concluded.

Lebohang Lebelwane, another parent, has also noticed a change in her 4-year-old’s eating habits.

“He is a picky eater so we struggled in helping him choose the right kind of food. But now, he eats everything we put in front of him and obviously that is coming from the school,” said Lebelwane.

Lebelwane says, the teachings at school have had a direct impact on their home life which now boasts their very own vegetable garden.

“I am very big on us growing our own food. I try to get the kids to understand where the food comes from and if it wasn’t for the school introducing a healthier lifestyle, we would be struggling.”

She says her 5-year-old son Liam know of vegetables she had no idea of at the same age. “They always incorporate their own organic vegetables when cooking and they don’t promote junk food. My son always opts for an apple over junk food because his teacher told him that fruits and vegetables are good for his growth and for him to grow muscles,” said Matlhabegoane.

According to a 2017 review which focuses on the development of food preferences in children, early childhood is a critical period to establish food preferences making it an ideal age for efforts to improve diet quality.

Furthermore, investments made during this period will be compounded over time, as food preferences established in early childhood persist into later life. – Health-e News