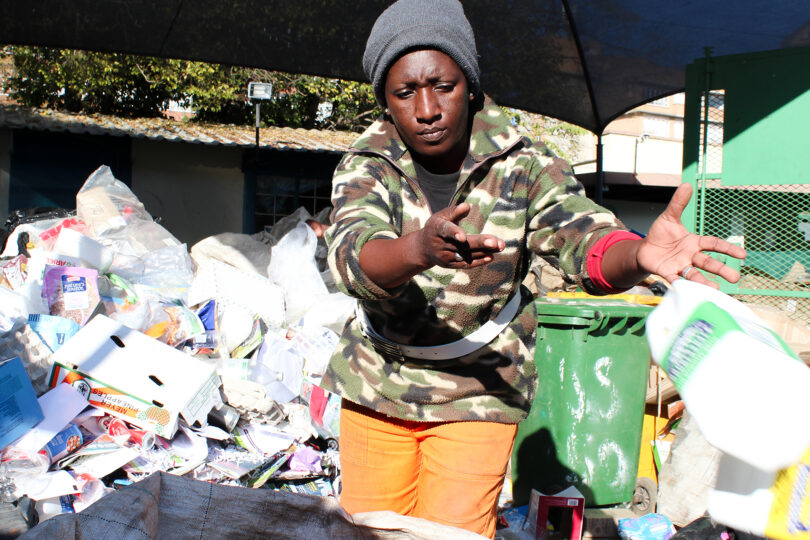 Evah, 38, uses the money she makes as a sorter at Volition to take care of her two children. (Photo: Lilita Gcwabe)

The thousands of reclaimers who work across South Africa are credited with removing 80%-90% of the post-consumer products from urban and suburban spaces, yet they are still not recognised as formal employees by government.

An estimated 85 000 recyclers or waste pickers operate in South Africa, cleaning urban and suburban spaces, and research by the Council for Scientific and Industrial Research shows they remove 80%-90% of the post-consumer products that are thrown away by society.

Volition Recycling is a buy-back centre located in Sunnyside, Pretoria, where reclaimers meet at the end of the day to weigh their materials and get paid according to how many kilogrammes they have collected.

Doctor Mnguni (45), who has been a manager at the centre for five years, said that more than 50 reclaimers go to the centre on their busiest days of the week – Monday to Wednesday.

“I see grandfathers, mothers and husbands – some unemployed, some hungry and some homeless – of all different ages coming to the centre to trade their material for money. We start paying from R1.80 per kilogramme and sometimes people can leave here with anything from R100 on a good day to R8.20 on a bad day. We take boxes, plastic, paper and other recyclable material.”

However, Mnguni added that the little the recyclers get is better than nothing. “It’s unfortunate that many reclaimers I have seen coming here for years are still not recognised as formal workers who get paid monthly wages and receive basic personal protective equipment to use for work,” said Mnguni.

Members of the African Reclaimers Organisation in Johannesburg recently made the decision to call themselves “reclaimers” instead of “waste-pickers” or “waste recyclers”, as they are commonly referred to. They say that this is because they do not pick waste, they pick items of value and they reclaim what society has thrown away.

Kgosi Letsoalo (38), a reclaimer from Sunnyside, in Pretoria, has been collecting recycling material for four years.

“I was a construction worker in my community. I used to install fences and build pavements, but after being in a car accident, I couldn’t work for more than six months. That’s when I slowly started to collect glass beer bottles in the street and realised that it was making me money, so I decided to spend more time on it. In the beginning, I was able to make R150 a week.”

Letsoalo said he walks more than 20km every day to collect material in surrounding areas and suburbs outside of town.

“I wake up between three and four in the morning, from Monday to Wednesday, so that I can get to nearby suburbs like Brooklyn and Waterkloof before the eight o’clock truck comes to empty the bins. I collect material for the whole day, and on Thursday I go and trade in my material,” he explains.

“I am concerned about the risks of sorting through material without wearing gloves, as I could contract COVID-19. We sort through people’s used tissues, syringes and toothbrushes, as well as many other items that are known to carry the virus. We are out during the coldest hours of the morning and we don’t have money for masks and sanitisers.”

The African Reclaimer Organisation (ARO) organiser and coordinator Eli Kodisang said that most people do not collect recyclable material because they are environmental activists, but because they are looking for ways to make an honest living.

Before starting the African Reclaimers Organisation, Luyanda Hlatshwayo was himself a reclaimer/ waste picker. He takes us through a day in the life of a waste picker #WorldEnvironmentDay pic.twitter.com/8wn8wP1JKm

“A pilot project called ‘Recycling with Reclaimers’ by ARO and partnering residents from Brixton and Auckland Park, in Johannesburg, found that each reclaimer collects an average of 128.18kg of recyclable material on a daily basis. Some collect 200kg or more.

“This removes the responsibility from ordinary consumers in terms of the materials they throw and what happens to them. In the process of earning a living, reclaimers become environmental heroes,” said Kodisang.

Getting off the street

Agnes Tshabalala (not her real name), from Gezina in Pretoria, worked as a sex worker for two years before becoming a sorter at Volition Recycling. 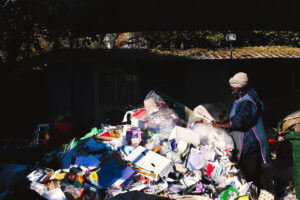 Agnes Tshabalala sorts through recyclable material. She requested for her face not to be shown for fear of being discriminated against because of her past as a sex worker. (Photo: Lilita Gcwabe)

“When I found out I was pregnant with my daughter in 2016, I decided to get off the street. Finding a job was not easy, so I decided to start collecting material. However, it was hard because it wasn’t safe for me to be out during the early hours of the morning and I’d lose money by staying inside until sunrise,” said the 34-year-old.

Tshabalala said her strength and resilience has carried her through the five years that she has worked as a sorter at the buy-back centre.

“The job hardened my hands in the beginning. It’s a very hard work because we lift a lot of heavy bags and material sometimes. I pray that government will recognise the work that we do and formalise these jobs, so that other women like me can also see that this an opportunity to make enough money to put bread on the table.”

Headaches, back pains and a long walk to the clinic

Evah Makhubela (38), from Zimbabwe, uses the money she makes as a sorter at Volition to take care of her two children, as well as her brother and sister, who are dependent on her.

“I started here in 2017. On a normal day, I stand on my feet for more than five hours straight, sorting through material, grouping it and making sure that it is clean, as reclaimers must wash it themselves. By the time I go home, my waist feels strained and my head hurts from being in the sun for so long.”

Makhubela said that the nearest clinic is an hour’s walk away, as she doesn’t have money for a taxi.

“Sometimes, by the time I get to the clinic, I feel numb and don’t even feel the pain anymore. The nurses are helpful, because they give me medicine for my pain, but I always find myself back there every few months.”

Makhubela said being recognised as a formal employee by government would ease her stress about how she will support her family when she grows too old for the job. – Health-e News