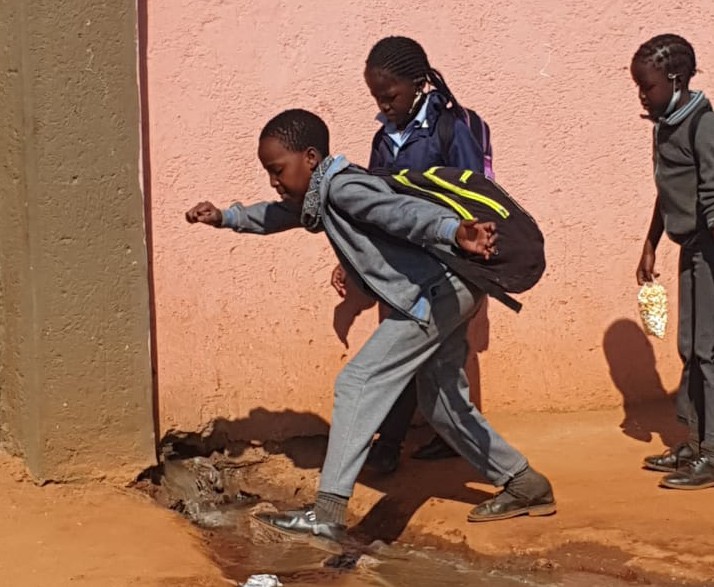 While residents in Limpopo live in a nightmare of overflowing sewage and no running water, ANC councillors have been accused of being too busy bickering instead of attending to infrastructure issues plaguing Mahwelereng.

People, some without masks, walk with their hands covering their noses and those who are sprightly enough, leap over smelly streams of sewage flowing sluggishly in most streets of Mahwelereng township and extensions, outside Mokopane, in Limpopo.

Affected residents claim they have been living with the smell and with sewage spilling into their homes for several months now, while also having to endure frequent water cuts.

According to those who spoke to Health-e News, recently factional fighting among ANC councillors in the Mogalakwena Municipal Council was the major cause of their woes. They accused the municipality of exposing them to hazardous health conditions by failing to provide potable water and timeously repairing damaged or faulty infrastructure.

Gloria Molomo (51), of Extension 17, Mokopane, said: “Since June, there has been no water in the whole Mokopane area, including in the town.  I’ve been affected since November last year. I have no water until now.

“I live with my husband, three children and two grandchildren. Every day we knock on neighbours’s doors to beg for water and understandably they get tired of us.  We also have to ensure there is always a bucket of water in the toilet for flushing.”

Molomo said that municipal workers do come and fix problems occasionally, but these repairs are mostly temporary and the problems start again. They once told her that they would bring an excavator to dig up the streets and check the pipes, but this is yet to happen.

Raisibe Matjiu (48) lives with her four children at Extension 20 and said their sewage problem started six years ago.

“Our house feels like a chamber of bad smell and diseases. It started a long time ago, when in November 2015 it rained heavily and a lot of sewage spilled out from the toilet because of the water drainage system not functioning properly outside.

“I was pregnant, but I frantically tried to scoop the mess out with a bucket, because it had started to flow into the entire house. I suffered labour pains and was diagnosed with high blood pressure, which I still suffer from today. This is probably due to the stressful situation we are living under.”

Matjiu said that her daughter, who nine years old at the time now suffers from sinus issues due to the continuous smell. Meanwhile, the baby girl she gave birth to then is now in Grade R, and yet the family continues to live with the stench and mess.

She has reported the situation to the Mogalakwena municipality several times, but to no avail. “Municipal workers did come to unblock the toilet, but it soon blocks up again. It is when it rains because the whole house gets flooded with raw sewage.”

Community protests, but no action

Community activist Motlatjo Selomo said: “As civil society organisations, Mogalakwena Concerned and Affected Communities, SANCO and Mokopane Task Team have been protesting to the Mogalakwena Municipality, expressing our frustrations, but our pleas have fallen on deaf ears.

“People will get sick from waterborne diseases, because sometimes you see the sewage flowing in the streets, where children are passing. They inhale the stench and will eventually get sick. “This is a disaster, but unfortunately our municipality thinks that we are not telling the truth. Here is the evidence, yet nothing is being done. The ANC councillors who are in majority are engaged in factional bickering among themselves, leaving us to live with sewage in the midst of the COVID-19 pandemic.”

Selomo has reported the situation to the South African Human Rights Commission (HRC) in Limpopo.

However, HRC provincial manager Victor Mavhidula said the Commission could only locate a  complaint related to a water crisis, but not leaking sewage.

“I can confirm that our investigator is handling the case. I can’t give a time frame as to when the matter will be finalised, because it depends on the municipality’s response. We can’t predict finality, especially when the matter involves government where there is a possibility of litigating. We give respondents time and if we are not happy, we can take them to court,” said Mavhidula.

Health-e News sent questions to Mogalakwena Municipality spokesperson Malesela Selokela on 16 August via WhatsApp and received the following response: “Received, I will give this urgent attention.” Selokela then also promised to respond during a subsequent telephonic conversation.

Some residents in the Mogalakwena Local Municipality have expressed concern about the #SewageSpillage they are experiencing in their homes and internal streets, saying they have been trying to get the municipality to assist them, but to no avail. LM pic.twitter.com/GNhe2wF2hv

However, more than a week later, Selokela’s response was not provided at the at the time of publication.  Several follow-up calls to his cellphone went unanswered.

The Mogalakwena Municipality has been marred by instability and internal squabbles among the ANC councillors for several years now and many of these battles have spilled over to municipal managers and workers.

Since 2016, the ruling party has installed five different mayors at metro, but all were fired before they could serve out their terms.

Contacted for comment, ANC Limpopo provincial secretary Soviet Lekganyane said the queries should be dealt with by the party’s officials in the Mogalakwena Municipal Council, and said that he could not speak on their behalf.

Queries were also sent to Mayor Frans Mokwele, who took office in February after his predecessor, Andrina Matsemela, was fired in December last year. While Mokwele confirmed the receipt of queries from Health-e News on 23 August, he responded that he would need “reasonable time”, without specifying further. His response is yet to be received.

President Cyril Ramaphosa signed a proclamation unleashing the Special Investigating Unit (SIU) on Mogalakwena Municipality and it activities in March. The outcome of this probe is still pending. – Health-e-News