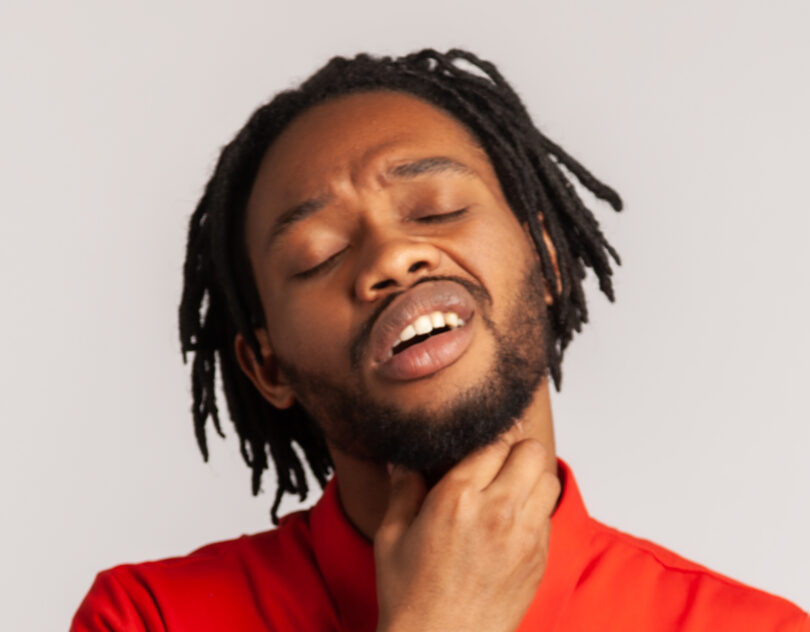 A father of three, battling thyroid cancer, has highlighted the importance of taking action early and visiting a doctor regularly to check for any abnormalities.

What makes this disease even more ominous, like most cancers, is the lack of any early symptoms.

“I was very ignorant and never thought I’d be sick with a killer disease. I found about thyroid cancer late and if I had earlier, I might have been able to fight it,” said the 49-year-old.

Ramphalla ignored early signs due to shyness and having to open up to others. He said that after a lump had developed, he hid from other people in the fear of being ridiculed.

“There was a pain at the front of my neck which would sometimes go up into my ears. At this stage, I didn’t think of seeing a doctor despite the pain and the lump which was growing. My voice also became hoarse,” said Ramphalla.

The thyroid gland is a butterfly-shaped organ, located at the base of the neck, just below the voice box, or larynx.  Its function is the production, storage and release of thyroid hormones into the bloodstream. Thyroid hormones influence metabolism, growth and development, and body temperature. The main hormones are thyroxine (T4) and triiodothyronine (T3).

Thyroid cancer may be detected as a lump (nodule) in the neck. But often, cancers are found during imaging tests performed for other reasons. Rarely, thyroid cancer may cause pain, difficulty swallowing, or hoarseness. #CheckYourNeck pic.twitter.com/RseMV5wjLU

Thyroid cancer occurs when a cancerous tumour is found in the thyroid gland. Cancer begins in cells when cell growth is abnormal, and which then leads to abnormal tissue formation. The abnormal tissue in the thyroid gland is referred to as a nodule which then can develop into either a benign nodule or a cancerous tumour. Most thyroid nodules are benign.

According to the Cancer Association of South Africa (CANSA), about 50% of people over the age of 40 have a thyroid nodule, most of which are benign. Only 7-15% of thyroid nodules are malignant.

There is help at hand for people like Ramphalla who often feel alone.

Ocesa, a non-profit organisation for cancer education in South Africa, offers support to people who have had cancer experience, feelings of unwanted loneliness and a loss of control and hope.

Cancer education is vital to each and every individual in our society, as prevention and being informed about cancer is better than going through such a traumatic experience.

What to look out for

Knowing what to look out for can help individuals who avoid seeking medical advice or treatment due to COVID-19 fears.

According to Ocesa: “Thyroid cancer can occur at any age, but the risk peaks earlier for women (who are most often in their 40s or 50s when diagnosed) than for men (who are usually in their 60s or 70s). Having a first-degree relative (parent, brother, sister, or child) with thyroid cancer, even without a known inherited syndrome in the family, increases your risk of thyroid cancer.”

For now, Ramphalla is taking each day as it comes and continues to take his daily thyroid hormone (levothyroxine) pills to replace the missing thyroid hormone.

“It is not wise to ignore medical treatment. I recommend visiting your doctor at least once a month once diagnosed,” he added. – Health-e News